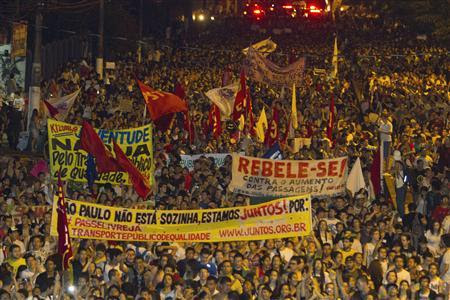 Brazilians are mad as hell and taking to the streets to launch violent protests in response to their government spending billions on new sports stadiums while ignoring basic services. An estimated 200,000 protesters took to the streets in Brazil's largest cities to voice their outrage, an unsettling situation as the country prepares to host next year's World Cup and the Olympics in 2016. From Reuters:


The protests have gathered pace as Brazil is hosting the Confederation's Cup, a dry run for next year's World Cup soccer championship. The government hopes these events, along with the 2016 Summer Olympics, will showcase Brazil as an emerging power on the global stage.

Brazil also is gearing up to welcome more than 2 million visitors in July as Pope Francis makes his first foreign trip for a gathering of Catholic youth in Rio.

Contrasting the billions in taxpayer money spent on new stadiums with the shoddy state of Brazil's public services, protesters are using the Confederation's Cup as a counterpoint to amplify their concerns. The tournament got off to shaky start this weekend when police clashed with demonstrators outside stadiums at the opening matches in Brasilia and Rio.

"For many years the government has been feeding corruption. People are demonstrating against the system," said Graciela Caçador, a 28-year-old saleswoman protesting in Sao Paulo. "They spent billions of dollars building stadiums and nothing on education and health."

More protests are being organized for the coming days. It is unclear what specific response from authorities - such as a reduction in the hike of transport fares - would lead the loose collection of organizers across Brazil to consider stopping them . . .

The same thing continues to happen here in Indianapolis year after year as billions are spent financing sports while cuts and more cuts are made in funding basic city services with no public protests whatsoever. Indianapolis residents seemed to be conditioned to accept it as the way things are.
Posted by Gary R. Welsh at 9:13 AM

...the facts of this story sound similar to what our Mayor has been doing here. Build sports venues at the expense of public safety.

The Romans at least got Bread and Circuses. Here all we get is a Circus (Professional Sports) that we the people pay for and the 1% eat up all the profits.

It is too bad that not one member of the City-Council can stand against this scheme of taxing the people to pay the rich.

The servile Mega-Media Press would probably not report on a demonstration here against Corporate Welfare.