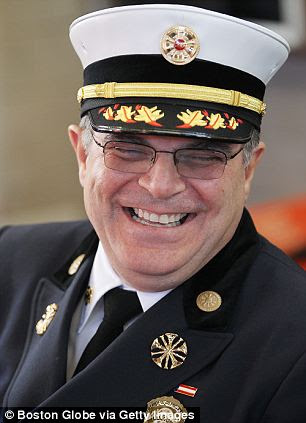 Boston's Fire Chief Steve Abraira resigned yesterday after facing weeks of criticism for not taking a more active role on the day of the Boston Marathon bombings. Abraira was the first fire chief hired in Boston who did not come from within the ranks of the firefighters union. Following the Boston Marathon bombings, an e-mail was leaked to the media that was sent by deputy fire chiefs criticizing his supposed inaction on the day of the Boston Marathon bombings. "His justification for failing to take action is indefensible," they wrote. In a resignation letter, Abraira said he was leaving because "the baseless attacks" made against him "made it impossible for [him] to continue to do [his] job." Abraira said he didn't inject himself into the response to the bombings because the response of those below him within the department seemed to be working and that he didn't want to insert himself "into a situation that is already being controlled."

Actually, if you watch the videos and photos taken at the scene of the bombings, you would be hard pressed to find anyone from the fire department responding to the immediate aftermath beyond standing at the perimeter using their fire trucks to block access to the scene by others while the crisis actors were being filmed. Instead, we were treated to "heroes" like "cowboy hat guy" who rushed to the scene and assisted supposed double amputee bombing victim Jeff Bauman rather than a fire department EMT who would normally perform that job, just one of many anomalies the mainstream media has chosen to ignore. Perhaps Abraira didn't see a need to be more involved in an event that he knew was entirely staged. Abraira should take a cue from Indianapolis' disgruntled top IMPD officers who were demoted in the aftermath of the David Bisard fiasco and sue the city for defamation. Maybe he can score a big payoff like our demoted IMPD officers got for the humiliation and harm to their reputations they supposedly suffered for their inaction.

Something worth a gander is this report on how Obama's FEMA Director, Richard Serino, is the former head of emergency services for Boston who coincidentally authored a detailed and fully operational plan for carrying out a mass casualty event at the Boston Marathon in 2008, titled "Marathons-A Tale of Two Cities and the Running of a Planned Mass Casualty Event." You just can't make this stuff up.

UPDATE: It looks like Abraira's attorney is already thinking about a defamation lawsuit. The Boston Globe has a story discussing a "cease-and-desist" letter his attorney sent to those attacking him:

Metrofire, an association of 34 departments in metropolitan Boston, came to Abraira’s defense.

In a letter, Metrofire chairman John F. Nash wrote that Abraira’s integrity was ­beyond reproach and that the Marathon bombings were ­being exploited to resist modernization and reform in the Boston Fire Department.

Abraira’s lawyer also sent a cease-and-desist letter to the deputy chiefs at their homes warning that they must refrain from making “defamatory and unlawful statements.” The letter said the “out­rageous attack [was] intended to strengthen [the deputy chiefs’] ability to reject and ­obstruct Chief Abraira’s efforts to bring the BFD in line with modern firefighting practices.”

The deputy chiefs responded with their own lawyer, ­Donnellan, who said that Abraira was trying to stop the deputy chiefs from testifying at a City Council hearing scheduled for June 18.