Certified fraud examiner Greg Wright has filed an ethics complaint with Sen. Barbara Boxer, Chairman of the Senate Select Committee on Ethics, asking the Committee to investigate whether Sen. Richard Lugar violated Senate ethics rules by using his official Senate office in Market Tower as the registered business address from the company that owns the family's farm in Marion County. According to records uncovered by Wright that were filed by Lugar with the Indiana Secretary of State's office, Lugar Stock Farm, Inc. has designated Richard Lugar, the company's president, as its registered agent with a registered business address that is the same as his official Indianapolis Senate office in Market Tower. Federal law prohibits Senators from using their offices or staff for purposes "other than assisting Senators in their official legislative and representational duties, and not for the purpose of performing personal or non-official activities for themselves or on behalf of others." The letter Wright sent to Sen. Boxer reads:

Regarding: Senator Lugar’s Use of his Official Office for Personal Use

Leaders representing fifty-five Indiana Tea Party organizations have asked me to request that you investigate this important matter.  Some individual members may contact you.

As Chairman of the Senate Select Committee on Ethics, we request that you investigate Senator Richard Lugar’s use of his official Indianapolis office for personal use.

Whereas, Indiana Secretary of State Certified Documents state that Richard D. Lugar is the President of Lugar Stock Farm Inc. and is its current Registered Agent. See attached copy.

Therefore, I respectfully petition the Senate Select Committee on Ethics to promptly conduct an investigation into the aforementioned allegation and refer any violations to the appropriate body. 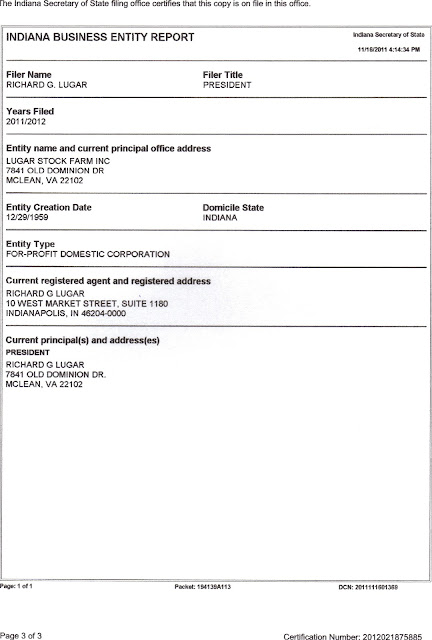 The Indiana Elections Commission will hear a complaint filed by citizen activists this Friday that seeks to disqualify Sen. Lugar from seeking re-election to an unprecedented seventh term. The complaint argues that Lugar is no longer an "inhabitant" of the state of Indiana, a constitutional requirement imposed on all Senators as an eligibility requirement. Lugar admits that he sold his only home in Indiana in 1977 shortly after he was first elected to the Senate and stays in hotels when he visits the state. Lugar and his wife have been registered and cast votes from a home at which they haven't resided in 35 years. He cites an Indiana Attorney General's opinion that says this arrangement is perfectly legal because the Indiana Constitution provides that persons temporarily absent from the state while in service to the government shall not be deemed to lose their residency within the state. The problem with that opinion is that it relies on a state law; only the U.S. Constitution can establish the qualifications to be a Senator, and it says Lugar must be an inhabitant when he is elected.

Lugar faced questioning by a battery of reporters during a speaking appearance in Indianapolis today. IndyPolitics has the audio of his comments here. When asked where he stayed last night, he said he stayed at the hotel where the conference was taking place. When asked why he didn't use the home situated on the family's farm as his residence, he said it was rented to someone else and that it wouldn't be appropriate to claim it as his residence. When asked what address he used to obtain an Indiana driver's license, he admitted that he used the address of the home on 3200 Highwoods that he and his wife sold 35 years ago. One reporter asked him if that was a violation of the Patriot Act. Lugar responded that he didn't know. Lugar sought to bolster his ties to the Hoosier state by saying that he managed the family's farm, although he conceded that a management company handles arrangements with the farm's tenant. He said he frequently visits the farm to survey its condition and tend to matters like pruning walnut trees that he and his son planted more than 20 years ago. The reporters, who have proven pretty slow on these matters, didn't ask Lugar why he uses his official Senate office as the registered business address for the family farm's corporation.
Posted by Gary R. Welsh at 8:40 PM