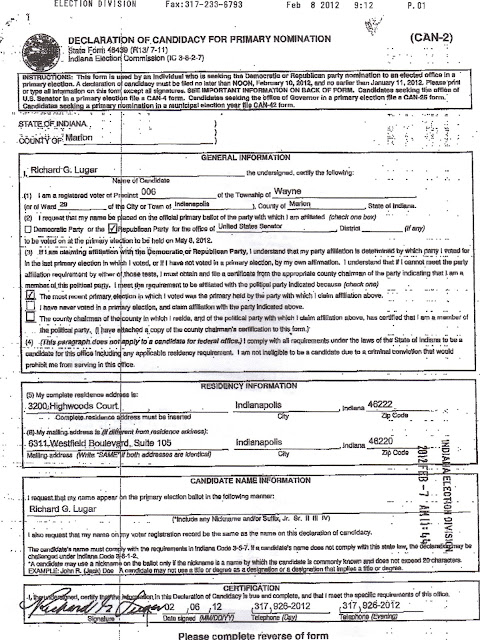 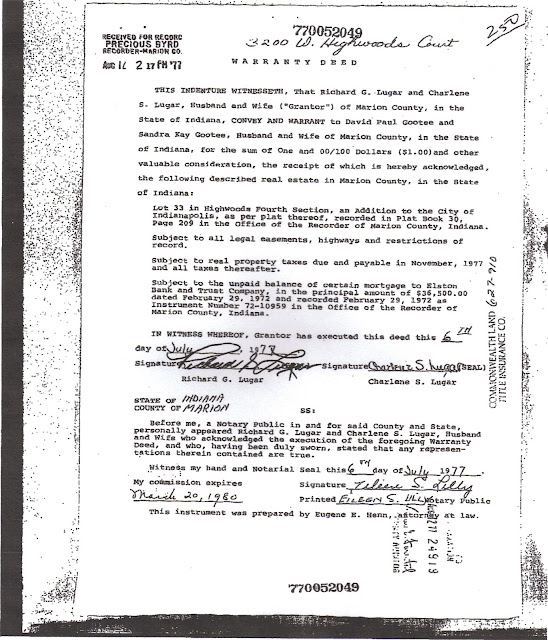 Sen. Richard Lugar filed his declaration of candidacy for the Republican primary today seeking re-election to an unprecedented seventh term in office. As he has done in each of his last five re-election bids, Lugar certified that he resides at 3200 Highwoods Court in Indianapolis. As I've previously documented with the warranty deed executed on July 6, 1977, Lugar and his wife Charlene sold their home at 3200 Highwoods Court 35 years ago. The two subsequent owners of the home have both  stated that the Lugars have not occupied the home as long as they've owned the property. Yes, the U.S. Constitution requires all senators to be inhabitants of their states when they stand for election before the state's voters, but Lugar claims a loophole in state law creates a legal fiction that allows him to continue to make statements under penalties of perjury that he resides at this address within the state and continue casting votes in dozens of elections using that address for the past 35 years because that's where he lived when he was first elected to the office in 1976. He admits he has no home in Indiana, only the home he and his wife have lived in for the past 35 years in suburban Virginia. Charlie White used his ex-wife's home for a several month period as his voting address and was convicted just this past week of six felony charges and forced to forfeit his office. As White proclaimed following his conviction, Indiana is a state of men, not of laws. The laws are interpreted to mean one thing for you and me and something quite different for the privileged elite like Sen. Lugar. Isn't that why we fought the American Revolution to gain our freedom from the British monarchy and adopted a constitution that guaranteed equal treatment under the law to all? To be represented by someone who doesn't even live among the people of the state he claims to represent?
Posted by Gary R. Welsh at 4:07 PM

Check out page two of the candidacy form. He had his signature notarized in Washington, DC. He's so out-of-touch with Hoosiers.

Perhaps White is just the first domino to fall.

That said, I don't like these kinds of ticky-tack laws, because a)there isn't a victim, and b) they just encourage people to check up on filings in a game of gotcha, which I don't find especially healthy. I know White believes in victimless crimes as just and valid, having expressed exactly that to me on several occasions. I wonder if his mind is changing at all? And, I find it curious that not once has he called for the laws to go away on the basis of injustice, but rather, says "Lugar & Bayh are as guilty as me!" Seems senseless.

And slapping people with felonies is ridiculous, but the law should be equally applied to all.

Mike, I think it's important that our elected officials actually live where they say they live. With White the issue was murky and a one time thing. With Lugar, he's being doing this blatantly for 35 years. He has no argument that he actually lives at that address or has been in the house in 30 years. Yet he continues to sign documents under oath, as does his wife, that he lives there. There is no excuse for that. And I wouldn't say that it is a "victimless" crime. The integrity of our political system is undermined by what Lugar is doing.

Paul, as a Fishers resident myself, I was much more unhappy with White being out of his district as regards the Town Council seat than I was for his Secretary of State run. He was clearly still an Indiana resident.

But, if the law is the law, and it's important that one live where he says he does, are you saying White is guilty?

As you've noted, Mike, numerous Fishers Town council members had moved outside their districts during their term without similarly being charged. You note that the council altered the district boundaries to accommodate them, but those new district boundaries were applicable to the next election; it didn't resolve their problem of living outside their district during the term to which they were elected because district boundary changes can be prospective only. It was deemed not a big deal because each of the town council members are elected at-large in Fishers. Even if they had changed the boundary to accommodate White's move, it would not have changed the fact that he didn't live in the district that was drawn for the term to which he had been elected.