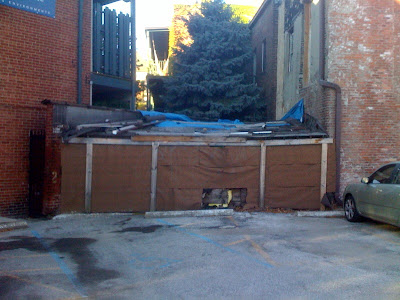 I think David Andrichik, the owner of The Chatterbox, is a really nice guy and operates a  real treasure of an historic establishment on Mass Avenue, but I've been biting my lip for several years now about this horrible eyesore his business presents on the ever-improving Mass Avenue business district downtown. After reading on Fox 59 News' website about a makeover planned for Mass Avenue as part of Mayor Ballard's Rebuild Indy program and Andrichik's comments about it, even with its inconveniences, I simply can no longer remain silent. From Fox 59:

It's Indy's arts community and hub for all things cool in the city but even a hipster district needs a makeover once in a while. This fall, Mass Ave is getting a splash of orange, courtesy of RebuildIndy.

"The area has exploded. The Cultural Trail is good but it doesn't have quite the impact that it does unless we can do these roads and sidewalks a little better, they were very, very bumpy," said Mayor Greg Ballard . . .

"The work needed to be done," said David Andrichik of the Mass Ave Merchants Association. "That's a problem. No matter how much you would ask for it, it wouldn't necessarily get done until you get on a schedule and the money becomes available, and now it's in the line." . . .

Andrichik believes most merchants are pleased to have the improvements.

"Realistically, if you're a merchant in any kind of city, you have to realize there are going to be inconveniences along the way for construction," Andrichik said


I walk by this eyesore on the backside of The Chatterbox building every day on my way to work. I've checked city records and know for a fact that the business owner was cited several years ago for doing work without a permit and issued a stop work order. Instead of getting the necessary repairs made in conformity with city regulations, the business owner simply left the work unfinished since the day he was issued the stop work order.

People have repeatedly complained to the Mayor's Action Center about the eyesore, but the Ballard administration refuses to do anything about it because Andrichik, as the head of the Mass Ave. Merchants Association, advocated in favor of the Ballard administration's plan to privatize the City's parking meter assets in order to provide a big time financial windfall to a major Ballard campaign contributor, ACS, while shortchanging Indianapolis taxpayers. As a reward, the Ballard administration is turning a blind eye to this eyesore while his administration has hauled thousands of Indianapolis homeowners and business owners into court over the last several years and fined them for far less serious code compliance matters. I've heard several Mass Avenue business owners quietly complain about Andrichik's building, but all of them are afraid to speak up about it for fear of retribution. Just consider this a favor to the other business owners on the Avenue who think it's high time the City did something about this eyesore but are afraid to speak up about it.

UPDATE: The Ballard administration actually tampered with the online system on the City's website to remove references to the prior code violation issues referencing the stop work order issued on the property. Yep, there is very selective enforcement of code violators by this administration. Talk to the people who handle code enforcement and they will complain that political considerations often prevent them from taking enforcement action they would normally take against a property owner because someone higher up ordered them to back off.
Posted by Gary R. Welsh at 3:08 PM

Until they address the homeless issue on Mass this is all for nothing. Everyday they are waking up and down mass ave yelling and hitting up people for cash.Its getting worse.I get it that Ballard thinks that he wil get votes because of fixing up the Ave,but it really did not need a totally new street.

Ballard can make the Ave a pretty place,but because of the pan handlers, no one wants to come these