Kostas Poulakidas, who is running for the Indianapolis City-County Council in District 4 against Republican incumbent Christine Scales, may be an attorney at a big law firm in town, but he seems to have a tough time complying with the law. A reader of this blog forwarded this photo below of a campaign sign for Poulakidas at the corner of Sherman Drive and 46th Street four months before the November election in the right of way in violation of a city ordinance regulating political signs. During the 2008 general election, Marion Co. Democratic Chairman Ed Treacy complained to the City of Indianapolis' corporation counsel because Mitch Daniels' gubernatorial campaign had placed campaign signs along Meridian Street that violated the city's ordinance regarding the size of political signs and demanded the City order the signs taken down. 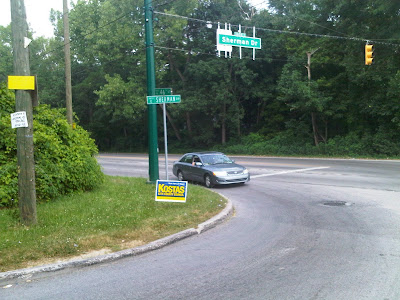 The city's ordinance regulating political signs isn't the only law Poulakidas has violated. In 2010, the Indiana Civil Rights Commission found that Poulakidas had violated Indiana's Fair Housing Act by placing an ad on Craigslist for a condominium he and his wife owned at 2230 N. Pennsylvania Avenue in the Fall Creek neighborhood that indicated a preference for leasing to a couple as opposed to a single person. The National Fair Housing Alliance filed the complaint against Poulakidas because it believed he was trying to discriminate against single mothers with children. The ICRC sided with NFHA. Poulakidas, who represented himself before the ICRC, was ordered to cease and desist from posting advertisements for his condominium that expressed a preference for couples and was ordered to pay $3,663.62 for the costs NFHA incurred in pursuing the complaint against him.
Posted by Gary R. Welsh at 7:44 PM

In related news - a Democrat was observed jaywalking downtown...

Seriously?!? a standard campaign sign in the ROW?!!? That's petty.

The housing ad complaint is petty too after actually reading the substance of the complaint.

After describing the condo with two bedrooms,two full baths and two walk in closets, he made the mistake of saying, "Perfect for professionals, professional students or couples". I can see virtually anyone -attorney or not-- making the same mistake unless you were specifically in the leasing business.

Look, there are real issues out there, your blog has covered some of them...but this isn't one.

Then tell Ed Treacy not to send any more letters to the corporation counsel's office complaining about political signs, Bob. You can bet that if a Republican candidate had been found to have violated Indiana's Housing Act it would be a front page news story. After all, Mourdock got royally blasted in the media because someone in the auditor's office mistakenly gave him a homestead exemption on his condo and he corrected their mistake after discovering it.

Obviously, AI, you don't understand.
Laws are for REPUBLICANS to obey.
Democrats are exempt.

What about the part discussing Kostas being a bond attorney at a big downtown law firm. Is he going to continue with that position after the election? Do we really want another Ryan Vaughn on the council?