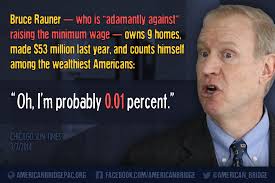 Billionaire venture capitalist Bruce Rauner (R) will become the wealthiest man ever to hold the governor's office in Illinois if his campaign to unseat incumbent Gov. Pat Quinn (D) is successful. According to the Sun-Times, Rauner reported $60.8 million in income on his federal tax return last year, up from the $53.4 million he reported as income in 2012. Income at those levels place Rauner and his wife in the highest federal income tax bracket of 39.6%, but the couple didn't pay anywhere close to the top rate. Their effective tax rate in 2013 was just 23.6%. How is that possible?

A lot of Rauner's income likely came from capital gains, which are taxed at a much lower rate. People like Rauner always make a lot more money in the stock market than you or I because they have the benefit of information reserved for insiders. Rauner would pay at a 20% rate on capital gains he earns. Wealthy people like Rauner often invest in tax-exempt bonds issued by the government, which can also reduce the overall effective tax rate at which wealthy taxpayers pay. He also likely has real estate investments with accompanying depreciation schedules that allow him to reduce his tax liability further. He owns nine homes.

Rauner's Democratic opponent was not satisfied with the information Rauner's campaign released on his income tax returns. Rauner did not release his accompanying schedules which would indicate his actual sources of income, his means of tax-avoidance and any potential conflicts of interest in his personal finances. Perhaps no Democrat in Illinois wants Rauner to defeat Quinn more than Chicago's Democratic Mayor Rahm Emanuel. Thanks to Rauner, Emanuel made a cool $16 million from an investment banking deal sent his way by Rauner during his very brief stint as in investment banker while he was in between jobs at the Clinton White House and serving in Congress.
Posted by Gary R. Welsh at 10:52 PM

Maybe all that experience at proper money management, without running a deficit, declaring bankruptcy, or taking other people's money and misspending it is a good thing.

He seems well qualified to manage a large budget as a leader. The fact he is willing to take on a Democrat disaster says a great deal about his character.

In the private sector you cannot take other people's money and mismanage it...that is what Democrats in Illinois have done. Without a change, they will become West Detroit.

But what kind of Republican donates over a half million dollars to Democratic candidates like Richard Daley?

One who has apparently knows that the 6th Floor exercises immense power in Chicago.

Gary, just another rich guy who covers his bases regardless of ideology.