Buttigieg Describes In His Own Words His Afghanistan Deployment 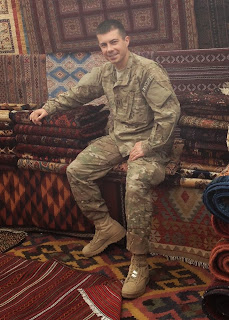 Fresh back on the job as South Bend's mayor, Pete Buttigieg writes in the South Bend Tribune today about his six month deployment in Afghanistan as a reserve naval intelligence officer. He served as a unit of one with a counterrorrism unit known as the Afghanistan Threat Finance Cell. In his own words, here's how he described his work:


The switch from elected official to junior officer was humbling from my first days training in South Carolina. No longer in charge, it was my turn to take orders and instructions, whether that meant hitting targets at 300 yards on a rifle range, or cleaning toilets in our barracks.

In Afghanistan, I was assigned to a counterterrorism unit called the Afghanistan Threat Finance Cell. Working long hours, seven days a week, we went after the most dangerous terrorist groups by targeting the connection between narcotics and insurgent financing.

I spent some days entirely on research and meetings, other days as a driver and armed escort for my commander and colleagues.

On the ground, the realities of war were unavoidable. The new normal included sprinting to the nearest bunker at the sound of insurgent rockets impacting nearby, learning firsthand how to tell the difference between a construction noise and a suicide bomb, and, on dozens of missions outside the wire, anxiously scanning the road at all times for signs of an attack.

Yet amid the strangeness of war, the most profound lessons of my time there came from observing just how familiar and universal the lives and hopes of ordinary Afghans are.

I spoke with Afghan men and women who defied Taliban death threats in order to vote and shape their future. I played with children who, though orphaned by the conflict, were no different than children at home in South Bend. Most Afghans I saw were focused on regular life — boys and girls going to school, families going to the market to pick up food for the evening meal, small businesses striving to grow and succeed . . .

Buttigieg reflected on two military colleagues who did not come home "the way that I did."


A hardworking sailor who volunteered with me to distribute humanitarian donations (including school supplies sent generously by the people of South Bend) is fighting to keep her leg, badly injured by gunfire. A well-liked soldier on our compound, who favored the same wooden bench that I did for relaxing and picking up a wireless signal to call home, was killed in action just days before he was supposed to go on leave to spend time with his family.

Buttigieg made no mention of President Barack Obama's Memorial Day weekend visit to Afghanistan during his brief deployment there. While he briefly touched on the election, he didn't mention outgoing President Hamid Karzai's scathing denunciation of the United States' military presence in his country during his farewell address, which he described as a curse upon his country. Karzai, a former employee of UNOCAL who described America as an enemy while praising China and Iran, said the war in his country was for the benefit of foreigners and not Afghans. Karzai's comments were particularly stinging given that the U.S. government, through the CIA, delivered millions of dollars in cash to Karzai during his presidency for services rendered. Karzai had a history of working as covert agent of the CIA prior to his election as Afghanistan's president. While Buttigieg may say his work was aimed at "targeting the connection between narcotics and insurgent financing," independent news reports confirm that one of the primary reasons for the American military presence in Afghanistan was to restore the CIA sponsored heroin drug trade in Afghanistan that has grown to record levels during the American occupation. Prior to becoming South Bend's mayor, Buttigieg previously worked in Afghanistan as an energy consultant for McKinsey & Co., a secretive international firm with close ties to the CIA.
Posted by Gary R. Welsh at 7:08 AM

This piece brings an expose of whom they choose and allow information shared with media. Campaign for fear on this piece and history of FB posts and your articles and more. Others are threatened with treason with reporting blood on their hands as well as family members of the the true facts not being presented. Dig deeper. They pick and choose their spokespersons for votes.