Well, that didn't take long. The Indianapolis Star's sports columnist Bob Kravitz, who earlier this week penned a column fully endorsing a $160 million gift to billionaire Pacers owner Herb Simon on top of the more than $40 million in subsidies paid out to the greedy billionaire over the past four years, declared IUPUI's Carroll Stadium inadequate for the minor league soccer stadium. One game and Kravitz declares the need for taxpayers to finance Turkish businessman Ersal Ozdemir's plans for an $87 million soccer stadium.


Clearly, Carroll Stadium cannot be the Indy Eleven's home in the future. There's a reason Ozdemir already has talked about building a soccer-only facility in the city. Carroll is small and antiquated, an erector set of a stadium.

Hey, Bob, get a clue as to why Indianapolis residents have dropped their subscription to your newspaper in droves. They're sick and tired of your newspaper's endless propaganda for every scheme that the downtown mafia can cook up to line their own pockets. Most of us could give damn less about how many people showed up for an opening game for Indy Eleven that was over-hyped by the local media like anything else related to sports. There weren't 11,000 people there contrary to news reports. It was a sell out if you count all of the free tickets the team gave away to entice people to show up for its inaugural game. If you want a new soccer stadium in Indianapolis, you and your jock strap-sniffing friends can pay for it yourselves. Maybe you and the Turkish hustler can get Alex Carroll to fix up the IUPUI stadium with some of that $20 million he's getting from Indianapolis taxpayers for that pile of rubbish building on the East side.

UPDATE: Check out this photo taken at the Indianapolis Indians game this weekend showing the empty stands despite the great weather that was posted on their Twitter page by Beau Barrett. I guess the Indy Eleven's gain this weekend came at the expense of the Indians. 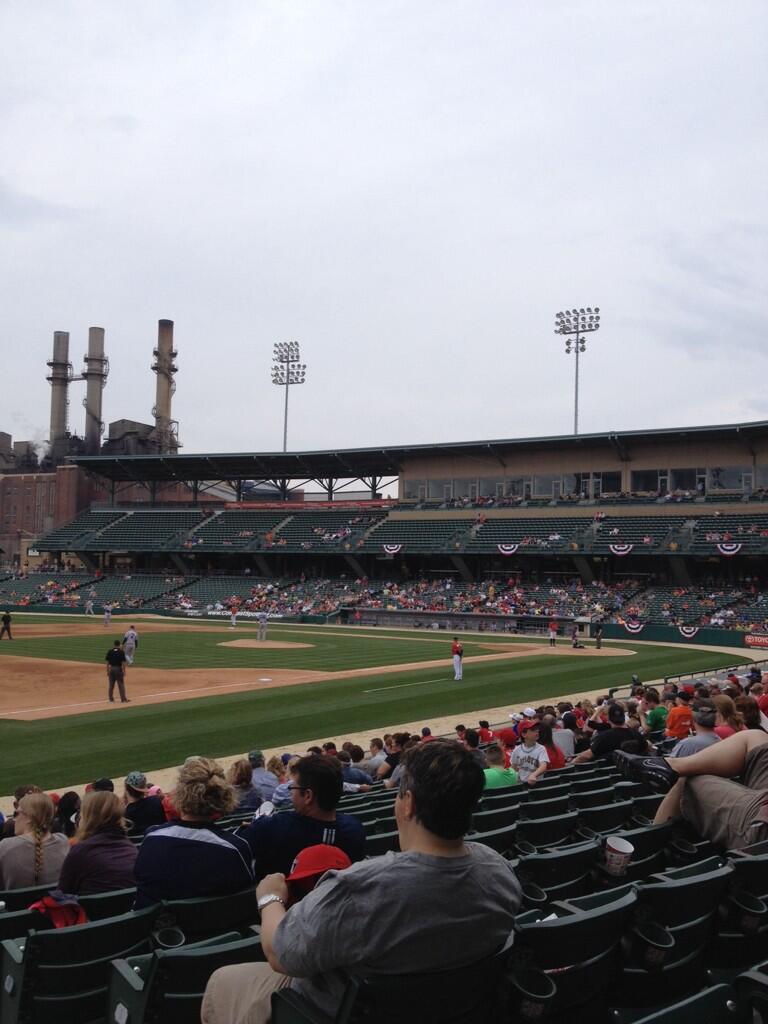 No surprise Kravitz of The Star is all on board the Corporate Welfare-Crony Capitalism ship. I suppose Tully will be the next to write a column lamenting the "need" for "State Assistance" - translation tax subsides. Tully's conclusion will be a subsidy for a new stadium will be necessary to maintain our "World Class Status." Erica Smith will probably chime in with a column on how the Indy Eleven will "bring us together" as a community. Then someone else will pen a column in the Media reciting some bogus report on the millions the city will lose if we do not build a new "Sucker Stadium."

Nuvo, which was long ago had a tradition of muckraking, had a huge article on the Indy Eleven. The Eleven's name has a Military Theme we are told. We had the Indiana 11th Regiment in the Civil War. (Have to wrap the American Flag around them.) From Nuvo article- At last fall's Armistice Day event Lt. Col. Shawn D. Gardner, the recruiting and retention commander for the Indiana Army National Guard (who attended on behalf of Major General R. Martin Umbarger, The Guard's adjutant general), Gardner thanked team owner Ersal Ozdemir "for bringing the world's game to the city of Indianapolis."

Another quote from Nuvo - "I want to hear the support of the entire state: From Fort Wayne to Merrillville to Evansville to Richmond and Indianapolis — everyone: Let's hear it for Indy Eleven!" said U.S. Senator Joe Donnelly.

Well it appears the Hype is in high gear and pedal to the metal, and I am sure the Political Establishment will be working over time to make sure the Stadium is built, and maintained by the tax-payers - not the owner.

I guess we can look at Detroit as a model for Indianapolis- a city that is declining into what Medieval Rome looked like for the people who continue to live there, but has brand new tax subsidized stadiums.

Here is the way I see it - The 99% in Indianapolis are being prepped for a Colonoscopy by the 1%.

Tully endorsed the stadium proposal in a column right after the proposal was announced half way through the legislative session without giving it a second thought.

It is the first day of something new. Hey Kravitz. Let's check back in a few months in and see if it is a full house with PURCHASED tickets.

After tripping out to Martinsville today to see the daffodils and learn some interesting Indiana history at the Link Observatory, we drove back to town past a beautiful old building that had been a bakery and has sat empty for years. We drove past the place an innocent man died on a morning walk by a good for nothing thug. Our next stop was to meet up with a friend to tell of our adventures and talk about the corruption in the city.

We all decided there has to be a special place in hell for the corrupt people who run and manipulate this city and their merry pack of magpies who whore for them.

The Indians' owners have been excellent corporate citizens, never asking for handouts. Recently, the IBJ did a story on their success and went so far as to suggest that as they approached negotiations with the CIB on a renewal of its lease agreement for Victory Field, the management would be breaching its duty to its shareholders if they didn't negotiate subsidies for the franchise's operations. That's how effed up things are in this town where a news publication basically tells a private business that it faces a threat of a shareholder lawsuit if it doesn't demand public subsidies.

Wasn't Kravitz a busy body in the sitcom Bewitched, the lady with irrelevant, inane opinions on the lives of others?

Attendance was down at Saturday night's game as well compared to the large crowds the Indians typically attract in good weather during weekend games.

Even so your picture is misleading and if this is place that we come to for truth you aren't being truthful. Also, you would need to compare April numbers to April numbers in the past. Indians attendance picks up in the summer months it is typically slow in April and the first part of May. The crowd for Saturday nights game was on par for a normal opening weekend game.

There is nothing misleading. Pick a picture from the game either day and it shows Victory Field with a lot of empty seats. The opening weekend, if the weather is good, generates good attendance numbers. Hell, it wasn't that long ago that there were more people showing up for the average Indians game than there was in attendance at a Pacers game.