Gov. Mike Pence and the leaders of the General Assembly constantly pat themselves on the back for the great job they're doing managing the state's budget. Unfortunately, their strategy for managing the state's budget is sometimes achieved by pushing the cost of government down to local governments. WRTV reports that starting on July 1, the Indiana Department of Corrections will no longer accept offenders convicted of Class D felonies, which represents about 4,400 inmates or 15% of the state's inmate population. The Department of Corrections' goal is to reduce prison overcrowding and cut costs.

According to Marion Co. Sheriff John Layton, more than 10% of that 4,400 inmate headcount representing offenders convicted of Class D felonies come from Marion County. If my math is correct, that means the Marion County jail will take on at least 440 additional inmates if they are actually incarcerated. Presumably, the additional inmate population will result in inmates being released early or allowed to serve their sentences on home detention. Class D felons convicted of non-violent offenses generally don't get prison sentences, or are allowed to serve them on home detention, so I assume that most of the affected inmates will be those convicted of crimes like assault, property crimes, drugs and gun violations.

Meanwhile, the esteemed members of the IMPD Staffing Commission have, to no surprise, recommended another large tax increase on Indianapolis residents to pay to hire 500 new police officers over the next four years. According to Mayor Ballard, crime has been down in virtually every single category since he became mayor except for the recent uptick in the homicide rate. Yet this Commission cites current crime problems as the impetus for supporting a tax increase for public safety. The Commission members, virtually all of whom have a self-interest in seeing taxes raised, say that support for a public safety tax increase right now is stronger than ever. The job just can't get done with the 1,500 full-time police officers we have they say.

The Commission plans to recommend to the council that it raise the public safety income tax rate 42% from 0.35% to 0.50%, phase out the homestead property tax credit and apply for more COPS grant funding from the federal government.  Why the federal government would continue to give Indianapolis more COPS money is beyond me. The City lied to the federal government when it said it was using past grant money from that program to hire 50 new police officers. In fact, the money was used to fund current positions; there were no new hires. Both the Republicans and Democrats on the Commission favor the tax increase. I use those party affiliations loosely because they're all really Republicrats who are united in their support of crony capitalism. They have no philosophical leanings other than they understand that their job is to do whatever is in the interest of the downtown mafia, no matter how harmful those actions are to the average citizens of this city.

In 2007, the City-County Council passed a 65% increase in the local income tax rate and called it a public safety tax increase. The plan called for hiring more police officers, which never happened. Instead, the council found other priorities, including diverting more than a half billion dollars to TIF slush funds to pass out public subsidies to finance the real estate development projects of some of their largest campaign contributors. Part of that tax increase was supposed to be used to cover a half billion dollar bond issue for an unfunded pension liability for public safety retirees. The 2008 property tax reform law had the state assume that debt so that part of the tax increase, about $15 to $20 million a year, wasn't needed for that purpose, which was freed up to be spent elsewhere.

The FOP, which always supports higher taxes and had representation on the commission, unlike average taxpayers, who had no representative on the commission, got a multi-year contract after the passage of that last public safety tax increase that provided big pay raises for police officers while other public employees saw their wages frozen, wiping out a good chunk of the incremental income tax increase. They chose higher pay over more police officers. Now that there's no money left for pay raises contemplated by the FOP's contract with the city, the FOP is back pushing another tax increase, which it has no doubt been promised will result in a new contract next year with promised big raises that have been delayed. Nobody on the commission cares about hiring 500 more police officers; they only want to pick our pockets so there's more money in the till to do with as they please. As for the public, you don't matter. You don't count for anything. These commission members could care less what you think. They only care that there's enough money to take care of themselves, their campaign contributors and the billionaire sports team owners. You can drop dead as far as they're concerned.

Fellow blogger Pat Andrews through charts shows us where our city leaders' real priorities lay, which you can read more about by clicking here. The one I've taken from her site below is quite telling. The CIB hauls away $152 million, while TIF districts consume over $118 million a year in revenues. We spend less than $25 million a year on parks, and we spend $196 million a year on police. The CIB and TIF expenditures dwarf the $50 million spent by the library district, and surpass the $118 million spent on IndyGo. Of course, these same people have another plan to enact yet another local income tax increase so you can pay to expand mass transit into the suburban counties. 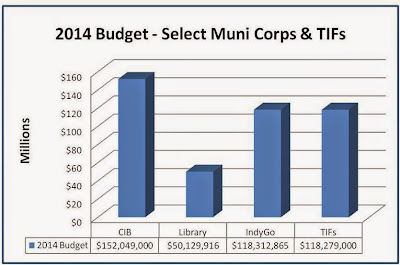 This makes NO sense! -With VIOLENT crime increasing, the legislature softens sentencing on crimes across the board, and then REFUSES TO ACCEPT CRIMINALS!

How can this happen? -Turning the violent predators loose into our community to violate us!

The problem is that Soft Judges Make Hard Criminals! There are 144 beds at the Marion County Juvenile Center.

Fewer than half are filled.

“There has been a specific conscious effort to draw down the population,” said presiding Judge Marilyn Moores. -That means RELEASING criminals to prey on us, and KILL US! Edwards was 15-years-old and on probation when he went on alleged cross-county crime spree that resulted in murder in February of 2013.

At the time, Adams was facing a detention hearing for missing nine curfew checks at his west side home!

What a sick, distorted, and bankrupt philosophy!!!

Then, instead of using our tax dollars for Public Safety, our Mayor has the smallest police force in modern history, and gives TAX money to the rich sports teams, and to builders of the "Regional Operations Center" (and refuses to provide the public documents about that arrangement)!

-With this news, the Mayor must STOP IndyConnect, building bike lanes, Cricket fields, luxury condos and other senseless projects....and instead build a new SUPERMAX Jail that can house 10,000 criminals immediately, and allow room for expansion!

Public Safety needs to be Job #1!

Incarceration costs the county. Home detention is a big, fat recurring payday for the county.

Has anyone seen this spring forward in property tax rates?

It's inaccurate to say that D felons don't get DOC time. They do. However, DOC is indeed expensive. It's unsurprising that the General Assembly has acquiesced to allowing greater use of Community Corrections; it's MUCH less expensive that DOC.

LamLawIndy: The worst is yet to come! D-Felony is looked at as an infraction in Marion County....look at the penalties given: "fines and costs - Guilty-Indigent" translates into NO PENALTY!

Now that DOC will refuse those offenders, it is truly time to build a SuperMax Fortress JAIL to hold at least 10,000! The state imposed it on us. We wanted Public Safety to be Job #1, we voted for it, the Mayor regened on us!