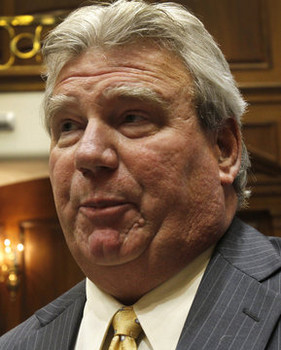 The Star's Tony Cook has another blistering story about State Rep. Eric Turner's shady nursing home dealings. Cook uncovered a past land deal where Eric and his son, Zeke, were accused in a civil suit of defrauding other investors out of about $3 million after allegedly forging the investors' names on an operating agreement that allowed them to transfer land owned by a limited liability company, Main & Batesville, to a non-profit entity. It turns out the non-profit was controlled by Zeke's father-in-law, Charles Riggle. Emanuel Nursery & Day Care used its nonprofit status to obtain a $3 million state tax credit, including a $650,000 development fee which was shared with Turner's Mainstreet Capital Partners, to construct a 33-bed skilled nursing facility on the land. The other investors of Main & Batesville holding a 66% interest were cut entirely out of the deal that only benefitted Turner's Mainstreet Capital, which managed the company and held a 44% stake in it.

Two of the investors in Main & Batesville, John & Rebecca Bartle of Fishers, sued Mainstreet Capital in Ripley Superior Court in 2010 for $3 million. Cook learned that Turner had stopped disclosing his interest in Main & Batesville in 2006 on his legislative ethics statement the same year that he and Zeke first engineered their fraudulent land deal without the knowledge of the other investors; instead, he lists his ownership interest in T3 Investments Corporation without identifying the companies in which it owns an interest. The lawsuit against Mainstreet Capital was later dismissed after the case was settled during mediation. Although the terms of the settlement were confidential, the Bartles were allowed to acquire another nursing home owned by Mainstreet for $3.1 million minus the debt owed on that facility. Rep. Turner wouldn't answer the Star's questions about the deal, and his high-paid spokesman, Roger Harvey, gave the standard line about the case being dismissed several years pursuant to a confidential agreement.

Turner is facing a House Ethics Committee investigation after several of his fellow Republican lawmakers squealed to reporters about his successful backroom efforts to kill legislation that would have imposed a moratorium on the construction of new nursing homes in Indiana. Turner had publicly stated that he would not participate in any votes or discussions this past session regarding the legislation, which both his son and daughter were lobbying lawmakers to vote down. What really galls me is how Eric and Zeke run around telling everyone what devout Christians they are. It's been my experience in life that people who feel a need to wear their religion on their sleeve are the people you have to watch the most closely. They're the first to pick your pockets when you're looking the other way.
Posted by Gary R. Welsh at 7:04 PM

Highland Manor? Sister with FSSA straight out of law school and left the day the DCS got a call on an employee...for neglect and abuse. They own a call center...Cover ups continue with the administration protecting this family and some workers. Dig dig dig and give us justice of a long time waiting. Ring in the leaders. Allowing him to continue to serve...one must question the ethics, goals, agenda of many...

House Ethics Committee investigation - now this is a true Oxymoron at least here in Indiana. What is troubling is the Republicans did not have the nerve to stand up to Turner. More troubling is that Bosma did nothing either. As I have had said before the Republicans try to identify and sell themselves to the Voters as the Moral Compass in this state.

It can be no surprise to the Republicans that the means, methods and motives of the Turner
Family are there for all to see.

I will let the cynic in me take over, and conclude the Turner Family will have to sweat a bit, but either the ethics rules are so weak, or the Republicans will close ranks and let the Turners off. It will Crony-Capitalism as usual.

I hear on the street that a 9/11 VICTIM is speaking in town next week and the only folks hearing about it are YMCA seniors to attend the breakfast...Propaganda...Votes...7am on Friday...Look it up...Why wasn't the public informed about this but only targeting seniors...with the Club...