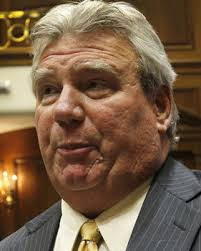 The Associated Press' Tom LoBianco has obtained documents that show that State Rep. Eric Turner made a sweet $8 million the past two years on the sale of nursing homes through the 38% stake he owns in Mainstreet Property Group. LoBianco is also reporting that Turner stands to make at least $1 million on each new nursing home facility Mainstreet constructs in coming years. LoBianco earlier reported that Turner stood to lose millions if the legislation opposed by Mainstreet had become law this year. Mainstreet has plans to build more than two dozen homes in Indiana over the next several years.

Rep. Turner is facing a House Ethics Committee over allegations by his fellow Republican lawmakers that he lobbied behind closed doors to defeat legislation that would have imposed a temporary moratorium on the construction of new nursing homes in Indiana. Turner had previously told his colleagues he would refrain from voting on or participating in discussions on the legislation that his son, Zeke, the CEO of Mainstreet, and his daughter, Jessaca Stultz, were both lobbying lawmakers this past session to defeat. WTHR is reporting that the House Ethics Committee will meet for its first meeting to begin its investigation on April 23.
Posted by Gary R. Welsh at 3:16 PM

The folks in the house and senate that propped this family up with a DCS Call Center, Tif's, economic development funds, and more all need to be questioned by a Grand Jury. Daughter was lead counsel for FSSA straight out of law school until she left quickly in Aug. of 2010...ponder that phone call. This mess of favortism, cronyism and fraud and corruption needs DOJ all over it. Not too mention selling bonds in Zionsville for a referendum...Connect all the dots...

Delusions of grandeur written all over this family and son driving across country to meet Buffet...Why did Zeke leave CA school on a scholarship...or asked to leave...and their involvement with Butler University and more...Agree with anonymous...Integrity Division...

I would expect a white wash is in the works by the House Ethics Committee. Turner may emerge a bit bruised but it should be business as usual.

Bosma once he found out about Turner's back door lobbying should have put a stop to it. I find it hard to believe Bosma did not knoe waht Turner was up to.

Major cloak of secrecy caucus issues with R's in this legislature. Delph is but one canary. The public interest is at serious risk.