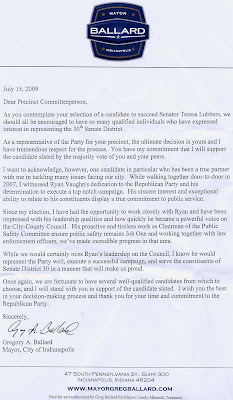 Mayor Greg Ballard wades into the 30th Senate District Republican caucus race by offering a letter of endorsement dated July 15 on behalf of City-County Councilor Ryan Vaughn, a lobbyist for Barnes & Thornburg. The letter began arriving in precinct committeepersons mailboxes today. Sources began complaining yesterday to me that Ballard had caved to pressure from Barnes & Thornburg's Bob Grand and Joe Loftus and agreed to endorse him. The two hired Vaughn soon after the Republicans gained control of the council and Vaughn assumed a leadership position in his party's caucus.

Ballard's endorsement is likely to have little effect on the outcome of the race either for or against Vaughn given the low regard he is currently held by so many within the party because of his repeated breaking of promises he made as a mayoral candidate in 2007, including a promise not to raise taxes. Ironically, Ballard is backing a candidate for the Senate who is the same lawyer-lobbyist type he railed against during his campaign against Bart Peterson as having too much influence over government decision-making. Three other candidates, including financial advisor Chris Douglas, cable TV lobbyist and former state representative John Ruckelshaus and former City-County Councilor Scott Schneider, are also vying for the support of precinct committeepersons at the caucus election scheduled for next Tuesday, July 21.
UPDATE: An astute reader of this blog has a good point. The nearly one-third precinct committeepersons who hail from Hamilton Co. may be a little less than enthused about supporting a candidate who comes off as Mr. Indianapolis. I agree. Ballard's letter, as the reader notes, may have more to do with Vaughn's struggle to sell Marion Co. committeepersons on his candidacy, potentially a sign of weakness. A precinct committeeperson advises me that Ballard's letter went to Hamilton County committeepersons as well.
Posted by Gary R. Welsh at 3:14 PM

Whenever I think I can't be even more disappointed by our supposed Republican Mayor he proves me wrong.

I still remember the tea party protesting higher taxes and lack of government accountability in Broad Ripple during the 2007 mayoral race. It took place smack dab in the middle of Vaughn's district. Mayor Ballard and his entire family attended the event. Ryan Vaughn's Democratic opponent attended. Vaughn was a no-show. By all appearances, he went out of his way to avoid appearing in public with Ballard. How short Ballard's memory is.

Wait, a second...."Dear Precinct Committeeperson?" Are you kidding me? They used a form letter?

I don't know who's running the show over there, but they have to be the least politically savvy individuals in the hemisphere. It would have been a piece of cake to set up a mail merge and personalize the letters to the PCs so they had their name on their letters. A form letter does not even begin to compare to a personalized letter in terms of effectiveness. A really astute politico not only would have used a mail merge to personalize with the individual's name, he would have dashed off a quick note on each one or at least signed them individually, which wouldn't have taken five minutes. It looks like a stamp or an electronic signature. Unbelievable.

Maybe an endorsement by Ballard isn't such a good thing considering his dismal rating.

It's a very good thing, Gary, that the activists' memories are long.

Jon, you must have not seen Ballard's internal poll. Didn't you hear? Ballard's ratings are SKY HIGH!

Don't forget that Ryan Vaughn is also a no-show at the Washington Township GOP meetings. Guess he thinks he doesn't need to be there since he's all dialed in with the snakes.

You really have to hand it to the Barnes folks. They are positioning their people well and solidifying their influence in both the City and State adminstrations. Their strategy benefits their clients and their firm. The clients who hire them don't give a hoot about about all this fuss and feathers - they want access and they want results. Barnes has asssured both.

And as long as there is no prosecutor who will protect the public's right to honest services, they will thrive with that strategy.

Melyssa, Ryan showed up for his first Washington Township GOP meeting after I blogged about that fact.

Gary, I thought no one read the blogs. Bob Grand must have told Ryan he better go so Gary Welsh won't ridicule him on the blogs.

I've said this before, but for someone to not attend their home township meetings early in their political career is the height of arrogance. That's somethign that elected officials with long tenures start doing (missing meetings).

I agree that the letter could be fodder to use against Vaughn by those candidates trying to get Hamilton County support. Everyone knows that Vaughn will be the tool of the Tom John/Bob Grand/Joe Loftus if he's elected. The letter puts that in writing.