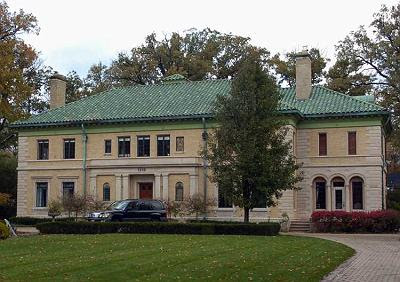 The Wilmette mansion of convicted political fixer Tony Rezko, a former best pal of Barack Obama, is going on the auction block after he defaulted on a $5.9 million mortgage. Bank of America holds the mortgage to the home. Rezko bought the home in 2003, in part, with his ill-gotten gains from political insider deals with Illinois' most corrupt politicians, including Barack Obama. Rezko even chipped in and helped the Obamas purchase their South Side mansion, a potentially criminal act that will probably go unpunished to protect Obama from one of several alleged criminal acts he committed as a state senator and U.S. Senator from Illinois before his election as president. While Obama and Rezko lived the life of luxury in their mansions, people living in the government-subsidized housing projects Obama helped secure for Rezko lived in complete filth and unsafe conditions. That's the Chicago way, and they wouldn't have it any other way.
Posted by Gary R. Welsh at 8:38 AM

Obama is mulling over letting people who can't pay their mortgages in this economy for whatever reason, stay in their houses and just rent from the government.

Maybe Obama will become Rezko's landlord and he can stay in his house that way. Wonder how Rezko would like that.

Come on Gary, get over this conspiracy theory garbage. You are a smart guy with excellent insight on state and local politics - even if I don't always agree with you.

All of this birth certificate, Rezko, boogie-man stuff is trash. No one cares, and it destroys your credibility.

Take a deep breath and repeat after me: "Barack Obama won the election. He is a US Citizen. My side lost because our National Party was a train wreck in 2008. There will be another election in 2012."

You will feel much better, promise.

People who knock these issues I raise about these characters typically come back and tell me later, "Gary, you sure were right about that guy." "I wish I had believed you the first time." I would be a rich man if I had a dollar for every time someone has told me that over the years. Barack Obama is a typical Chicago politician who used the political system to profit for himself and his wife. The evidence of this is so overwhelming it isn't even worth the time to debate. You choose to believe what you want. If a Republican had done half of the things Obama has done, he would have been driven out of public office and probably thrown in jail by now.

So how did you like the kool-aid, Smails?
Did you drink it down freely?
How's the weather there in Never Never Land?

I totally agree with Advance Indiana's statements of facts. When are the American people going to wake up and see the truth. The conspiracy is with the corrupt politicians who have fleeced America. It is time to look out our own back door and kick these criminals out to the curb. Corruption runs high, right here in the 'good ole boy' state of Indiana. Why wait for an election to rid our state and country of these criminals. I say, let prosecute them all here and now.

When obama threw his hat in presidential ring I had two words to say about it----CHICAGO POLITICIAN----and that was even before you got on the band wagon Gary so I think every thing you dig up is true.