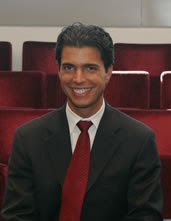 Fort Wayne Observed reports that Michael Montagano has filed papers with the FEC to run as a Democrat for the 3rd district congressional seat currently held by U.S. Rep. Mark Souder (R). Montagano is a 2006 graduate of IU Law School--Indianapolis and is currently practicing law with Lafayette-based Stuart & Branigan's Indianapolis office.
Montagano is a former neighbor. He rented a condo down the hallway from me during his last year of law school. He moved out last year after taking the bar and getting married. He's a very friendly, personable guy and a fellow Phi Delta Phi member. I knew he was interested in politics, but I didn't know he wanted to run for public office.
Souder had a much closer than expected challenge from Tom Hayhurst last year, who managed to get about 46% of the vote. It's still a Republican-leaning district though and 2006 was a watershed year for Democrats. It remains to be seen whether the GOP's fortunes will improve in 2008 and the impact Gov. Mitch Daniels' re-election bid will have on candidates around the state, including Souder's race.
Posted by Gary R. Welsh at 7:09 AM

If this guy drives a hummer, I had a chance to speak with him a while back. He seemed to be a really nice guy. I am positive it was him, he talked about how he went to law school here.

It's possible. He drove a BMW when he was my neighbor.

Whatever he drives, he's drop-dead gorgeous.

His views on pertinent issues are more important, though, and I hear Hayhurst is weighing another run, too. He did real well last year.

Souder is am embarrassment.

I forgot to mention that Mike and his new bride were unfortunate victims of the con artist fronting as a wedding planner on Mass Avenue last year. Fortunately, the guy was prosecuted, and I think he paid restitution to all the victims.

Souder needs to be dumped! He's one of the ultra-antigay activists in the House. He had conniptions when "Corpus Christi" was going to be playing at a university theater in Fort Wayne...

Michael was a Phi Kappa Psi in college and drives an H3, a car made by fellow Hoosiers near Elkhart. Good guy and is pretty sharp.

Michael is the voice of change this country desperately needs.

It's about integrity, and dedication to those being served. Not partisian politics.

It's time that we the people shook up Washington.... Starting with Michael Montagano.