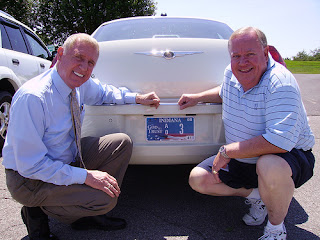 A new report entitled "A Family Affair" released by Citizens for Responsibility and Ethics in Washington (CREW) raises ethical concerns about Members of Congress using their positions to financially benefit members of their family. Some of the key findings include:

Those numbers are startling when you consider that CREW only examined those members who were committee or subcomittee chairpersons or ranking members of a committee or subcommitee. Three Indiana congressmen made CREW's list, including Rep. Dan Burton (R), Rep. Steve Buyer (R) and Rep. Mike Pence (R).

Rep. Dan Burton is the ranking member of the Subcommittee on the Western Hemisphere of the House Committee on Foreign Affairs. Burton used campaign funds to pay significant money to his daughter, Danielle Sarkine, for performing services for his campaign. He paid her $58,400 during the 2006 cycle, $58,500 during the 2004 cycle and $27,000 during the 2002 cycle. He also paid her several thousand dollars for reimbursements. Burton has also been helpful to his brother, State Rep. Woody Burton (R-Greenwood). He's contributed $6,000 to Woody's campaigns over the past three election cycles, and spent several thousand dollars for "car repairs and insurance" to Woody.

Rep. Steve Buyer, ranking members of the House Veterans Committee, paid over $2,000 in campaign consulting fees to his daughter, Colleen Buyer. Rep. Mike Pence is the Ranking Member of the Middle East and South Asia Subcomittee of the House Committee on Foreign Affairs. Pence's brother, Edward Pence, is a Vice President and registered lobbyist for Cummins Inc, which is headquartered in Pence's district. The company has received hundreds of millions of dollars in federal contracts over the past several years.

If we could get the Burton boys to vacation somewhere, instead of ponying up stupid government-sanctioned religious license plates, and shooting pumpkins in backyards, we'd all be better off.

Collectively, they might have half a brain. It's so embarrassing.

Agree we ought to remove family members from the teat.

The one immediate problem I see with that is how would the Carson family make ends meet (at least those not currently incarcerated)?

Dan Burton has helped me immensely. He's a great congressman and I really appreciate his leadership.

Dan Burton has consistently served his constituency. He is one of the most popular congressman to date. Attacking this man on such an issue would be a big mistake, and distract him from his duties as a congressman. The man does his job well don't get in his way.

Representative Burton is the best thing to happen to Indiana. He has shown tremendous leadership in Washington. I wish these people would start focusing on isuues that matter, rather than these idiotic notions that are merely a figment of their imagination.

Today I am a proud constituent of Dan Burton... Leave him alone!!!

Dan Burton has done more for Indiana than any congressman.....

Of course The Pretentiously-Named Scribe knows full well that no members of the Carson family are employed by our Congresslady. She does have two grandsons with college degrees who are successful Law Enforcement Officers (LEOs) for the State of Indiana.

But still a good try at deflecting attention away from the three GOP Congresscritters who are explicitly called out for familial self-dealing.

Dan Burton is a great congressman! He has been a champion when it comes to family issues, he respects and appreciates small businesses, he has sided with taxpayers on many crucial issues, and he has worked to cut back on much of the wasteful spending that occurs in DC. This is exactly the kind of Congressman I want representing me. Too bad there aren't more Dan Burton's out there!

Just a humorous observation... I love how people get on here and complain about the people of Julia's district being a bunch of sheep for continuing to vote her into office, and yet Burton's district of voters in a much higher socioeconomic bracket get a free pass. Whether you're Red or Blue, Burton is a pig and an embarrassment to our state.

And to all the anon posters, Dan Burton may do his job well... when he shows up.

Then again, when it's a day that ends with "Y" you're likely to find him golfing, vacationing, or taking some junket somewhere.

Wilson, you lying sack of crap (what a shock). What specifically is Andre's role, or are you going to claim he isn't on the payroll anywhere?

Andre has a Masters Degree and works for the Indiana State Homeland Security Department or whatever they call it nowadays ...

"The Pretentious Scribe" is a scribbler who seemingly can't read too well but is fast with the crude slur. I explicitly stated 2 of her grandsons were Law Enforcement Officers for the State of Indiana. What part of that statement didnt you understand, "Scribbler"?

Sure thing. He must have an AWFUL lot of free time. Same thing with the daughter...

How's the one doing who beat and tortured those people doing in the big house?

According to Federal Election laws, it is not illegal OR unethical to employ a member of your family on a campaign payroll. That is the bottom line. How many of you would, if you actually owned a business, as opposed to blogging all day, employ a family member? I'm sure many of you would. I'm tired of people bashing Burton for things that happen to him in his personal life. I think he's done a great job for the State of Indiana. Campaign money is different from taxpayer money. I for one, appreciate Burton's voting record to lower taxes and help small business owners. Keep up the good work Dan!!

I'm surprised the Burton acolytes haven't all been writing identically "Danny Burton is the bravest, warmest, gentlest, most wonderful human being I've ever known in my life!" There's obviously an organized "DEFEND DANNY" campaign going on here...

Can you tell me where you are retrieving this information about her salary from. I would like to check out that website.

Does anyone remember the fact that Dan Burton lost his wife to cancer and it appears that many of the votes missed were during the time she was sick. Doesn't someone deserve to be with their sick spouse and isnt that why Congress made the family leave act.

Wilson, isn't it obvious that it began with a bash Danny campaign. So when everyone began bashing loyalist came out to defend their Congressman.