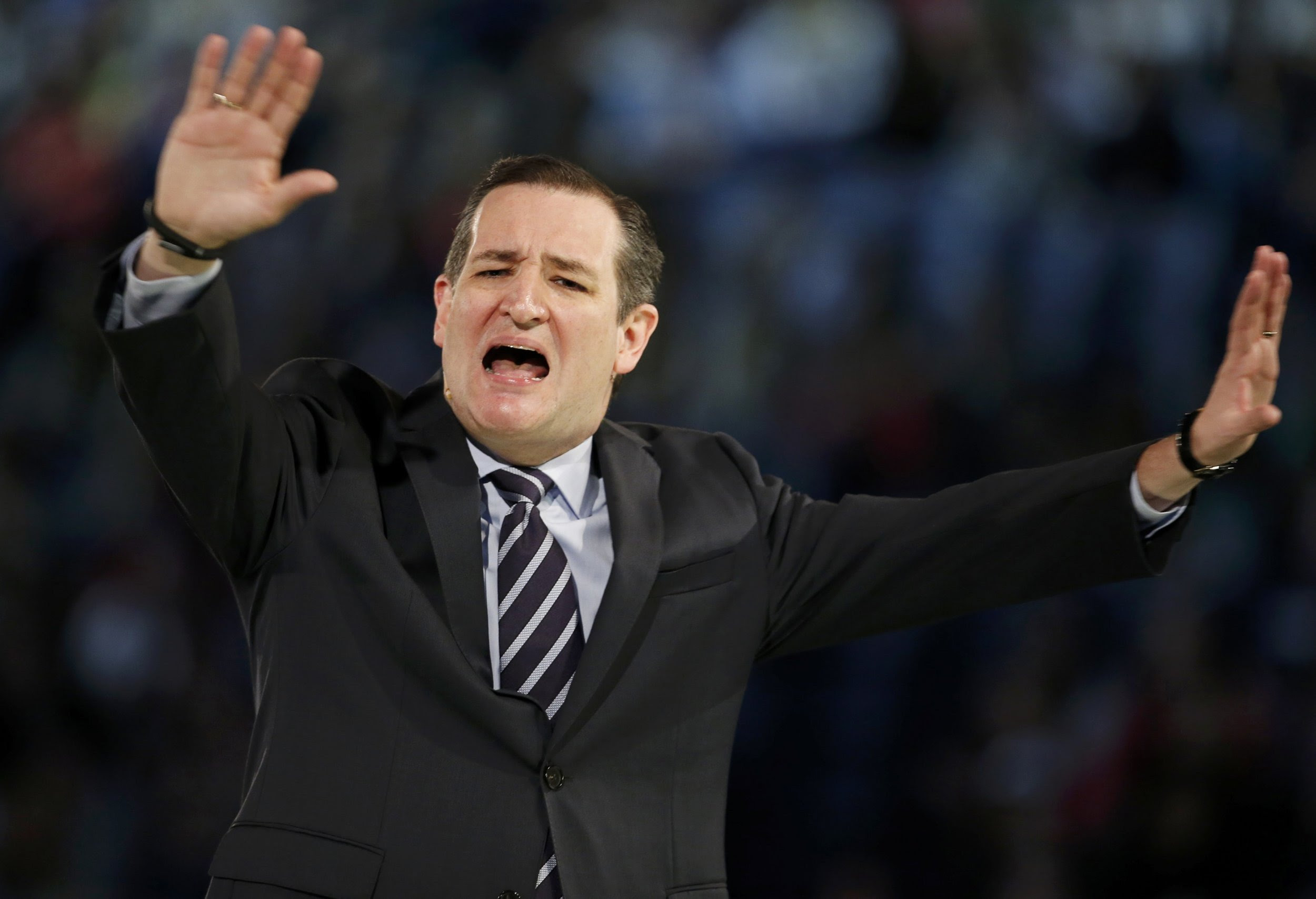 The reasons for fighting the Indiana State Republican Party establishment continue to mount. An e-mail blast from the state party boasts that Sen. Ted Cruz "will be joining special guest Gov. Mike Pence and keynote speaker Gov. Matt Blevin" at the state party's dinner to be held at Mary Ann Sullivan's Primo Banquet Center on Indianapolis' south side. The state party elites like to financially reward Democratic-owned businesses that are in the tank with them, while entertaining us with conservative phonies like Cruz and Pence who pretend to be disciples of Christ while taking money under the table from the likes of Goldman Sachs to enrich themselves. Does anyone else have any clue why the state party continues to host these dinners at a Class C facility in a dumpy south side neighborhood?
Posted by Gary R. Welsh at 4:54 PM

@$150 a person, too. I suppose that the search for delegate votes compels Mr. Cruz to associate with so very many scums (referring to your outing of delegates ....sort of a shopping list for the FBI if they can ever get off the Clinton treasons). Someone needs to tell Ted, before he is used, that the R establishment in Indiana does not care for Ted Cruz either and that as soon as they can use him to wipe their nether quarters, he will be flushed down their outhouse orifice. However, the ordeal for Ted is that he will suffer an evening with less than room temperature IQ sorts with quivering jowls and expanded waistlines who will sneer at him, dis his ideas, mock his moralities, and leave lowbrow tips for the waiters..

Lincoln Plowman has resurfaced (see http://www.wthr.com/story/15471391/closing-arguments-heard-in-lincoln-plowman-trial) and he is wanting you to join him and Trump to "Make America Great". He has posted on Nextdoor the following.

Hello everyone. I am seeking volunteers to work with the Donald Trump for president campaign.

We are seeking people to:

• Go door to door and talk about Mr. Trump and pass out literature
• Make telephone calls
• Put up yard signs

Primo Banquet Facility. Yelp gives it 2 Stars. Pence and Cruz together on the dais. Priceless. Give us that old time religion. You see, Cruz knows that Indiana has selected delegates that will betray Trump. So Cruz is coming whoring to Indiana for our delegates. And Pence probably thinks he has the political sway to deliver them to Cruz. But I'm not so sure.

Some reviewer is being overly generous.

You know Gary, the Saudi 9-11 connection is heating up: Saudi Arabia has told the Obama administration and members of Congress that it will sell off hundreds of billions of dollars’ worth of American assets held by the kingdom if Congress passes a bill that would allow the Saudi government to be held responsible in American courts for any role in the Sept. 11, 2001, attacks.

The Obama administration has lobbied Congress to block the bill’s passage, according to administration officials and congressional aides from both parties, and the Saudi threats have been the subject of intense discussions in recent weeks between lawmakers and officials from the State Department and the Pentagon. The officials have warned senators of diplomatic and economic fallout from the legislation.

Adel al-Jubeir, the Saudi foreign minister, delivered the kingdom’s message personally last month during a trip to Washington, telling lawmakers that Saudi Arabia would be forced to sell up to $750 billion in treasury securities and other assets in the United States before they could be in danger of being frozen by American courts.

Maybe somebody ought to start asking Cruz and Trump where they stand on some real foreign policy questions, because the next President has some huge ones coming his way, including potential armed conflicts with Russia and China, and a war between Saudi and Iran. Don't look to Pence for guidance. He won't find the answers in the bible.

The position of the Saudi government is that of the CIA since the Saudi royal family is only in power because of the CIA. The Saudi's sovereign wealth funds are nothing but a money laundering machine for the CIA. American campaigns are now largely funded by money that flows from the intelligence-controlled, money laundering operations. The Saudi government makes no decisions without consulting its masters in Langley, Virginia. Harry Truman and Dwight Eisenhower both learned too late to undo the sacking of the Republic by the CIA. Both died regretting the genie they had let out of the bottle that could not be put back in once it was unleashed. A legitimate government elected and controlled by the people hasn't existed in the United States for more than 50 years.

Putin sounds better than our clowns, though that is not praise. At least Trump questions NATO and US troops in Asia.

And why is an American ship hanging in the Baltic Sea, so close to St. Petersburg? Of course, our propaganda news agencies never question the Pentagram on that when Russian planes have a little fun.

There is an excellent book - The Devils Chessboard - Allen Dulles, the CIA and the Rise of America's Secret Government. The Dulles Brothers Allen and John Foster were uniquely suited to create what we know now as the Wall Street-Security, Military-Industrial Complex. One particular hideous Project of Allen Dulles was Project MKUltra. In essence the Project used chemical and other forms of torture and experimentation on human subjects.

The Supreme Court noted- between 1953 and 1966, the Central Intelligence Agency financed a wide-ranging project, code-named MKULTRA, concerned with "the research and development of chemical, biological, and radiological materials capable of employment in clandestine operations to control human behavior." The
program consisted of some 149 sub projects which the Agency contracted out to various universities, research foundations, and similar institutions. At least 80 institutions and 185 private researchers participated. Because the Agency funded MKULTRA indirectly, many of the participating individuals were unaware that they were dealing with the Agency.

Richard Helms a protege and later CIA Director ordered all MKUltra files destroyed in 1973, although some survived.

Within the past few years information surfaced on the use of Medical Professionals to engage in torture of captives in the War on Terror. This was not new MKUltra was the pioneer program.

What does the owner of the facility have to do with anything? Is there a backstory?

Gary, you are quite wrong about Saudi Arabia. They aren't puppets. There is a new Royal in charge. And the CIA is a player, but not the power you presume. They are burning thru their cash reserves, they have fears about popular uprisings if they try to curb social spending, they are becoming one of the largest weapons purchasers on the planet, and war with Iran could happen at the drop of a hat. We have a naval fleet offshore and a dozen operations going on in adjoining countries; a huge financial and military presence. The CIA does not control these either. And if you really think the new Saudi Royals take their orders from Langley you are not up to speed. Iran and Russia could close down the Saudi oil wells with a bombing campaign that shift oil sales to Iran and Russia. These are not CIA issues, they're regular military and fleet concerns. I believe the 28 pages should be made public and let the chips fall where they may. And if the Saudis want to sell their U.S. investments, so be it. We have bigger threats than the ones the Saudis present; they need us desperately. Obama will be there next week, and not to talk about 28 pages everyone has already read.

Does this tin foil hat make my head look fat?

What an elisist, denigrating thing to do by calling the neighborhood "dumpy." My sister and a good friend live near there. It's near their parish and their jobs. Obviously, it's an income bracket below downtown condos in cool old buildings.

I'm pretty sure everybody that works with Cruz in the Senate dislikes him, he doesn't have any peers who are his friends, and that says a lot about the guy, people just don't like him, and his father is a full fledged nut job who raised him to be a freakshow of religious beliefs. I think he'd make a lousy President. Anybody but Cruz.