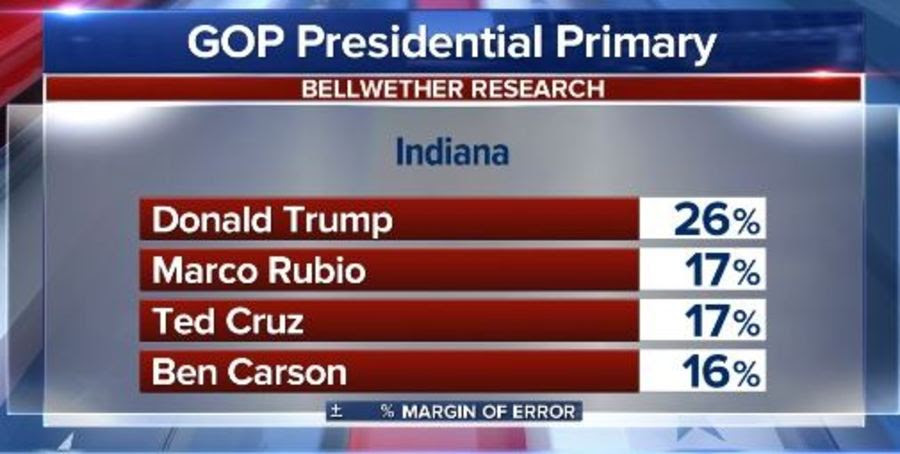 The Indiana GOP establishment won't like the results of a Bellweather Poll taken of 1,295 registered Indiana voters from December 2 through December 9. Like national polls and state polls in states voting early in next year's presidential primaries, Donald Trump leads the field with 26% support. Surprisingly, Marco Rubio, Ted Cruz and Ben Carson are locked together in an almost three-way tie for second place. Rubio and Cruz have the support of 17%, while Carson is favored by 16%. The Indiana GOP establishment's chosen candidate, Jeb Bush, comes in a distant fifth place with only 6% support, followed by Rand Paul's 5% share and Carly Fiorina and Chris Christie with 3% each.

Trump is favored by male and female voters almost evenly, with 26% support among men compared to 25% support among women. Cruz has the strongest support among those voters who consider themselves "very conservative," with 37% support from that bloc of voters. The poll found President Obama's approval rating to be very low, with 61% indicating their disapproval with the job he is doing as president. The poll's time frame included days during which Trump's call for a halt on Muslim immigration sparked a sharply negative reaction from Democratic and Republican officials alike.
Posted by Gary R. Welsh at 6:26 PM

Well, you are right about the Indiana RINO contingent being very unhappy but they are also brain dead and lack leadership skills. They have spent so much time "behind the scenes" collaborating with amoral corporations that they have lost touch with voters. They have also sold their base down the drain in exchange for cheap grace from the Star and moral preening as they attempt to sell sodomy to Indiana. They work pretty well with Senator Joe and many of them assisted his election and/or failed to support the Republican candidate or their own platform. Having looted Marion County for two terms they appear to be lost as to how they are going to butter their bread with their new guy since he might not be as accommodating as the current Mayor. Awful lot of backslapping for their departing Chair does not cover up his total failure in Marion County. And, if one were to guess, the RINO are not Mike Pence's friends either.
Of course, I could be all wet and know nada.

The RINO establishment has decided who is going to take the 36th Indiana Senate seat already. David Long, John Hammond, Kyle Walker and Jennifer Ping met and decided the district will get Jefferson Shreve, an empty suit who holds absolutely no Republican views at all. Why? Because he says he's going to dump a bunch of his own money into buying the Senate seat. I hope the Democrats field a strong candidate in that district. There are plenty of real Republicans in that district who are prepared to vote for the Democratic candidate out of spite to the arrogant people dictating who will represent that district. Notice that none of the people who made that decision actually reside in that district. I'm absolutely sick of the entire Republican establishment in this state. Our only choice left is to cause the party to lose as many races as possible just to demonstrate our fury at their abandonment of Republican principles to pick their arrogant, insiders who don't have a clue about the real world outside the sheltered circles of elites in which they run.

No, we need a man with the bravado of Trump to speak the words out loud to topple it all.

The third party constitutes the collegial establishment of both parties; who share an illegitimate, transactional interest in crony statism / socialism, to loot the public purse.

The Trumpet if you like him or not has certainly tapped into something. The Trumpet has an understanding of how to play the McMega-Media for all the free publicity. One bombastic statement after another by the Trumpet is endlessly reported on. The McMega-Media with an eye always on ratings has breathlessly reported on the Trumpet. I guess this a bit of if it bleeds it leads. I detect at this point a real worry among the so called and self styled establishment pundits a real worry that the Trumpet actually has a loyal following.

CNN, MSNBC and FOX have all tried by various methods to put a torpedo into the Trump Campaign to no avail.

The publicity Trump receives is in stark contrast to the virtual no publicity by the McMega-Media for Bernie Sanders. The McMega-Media is controlled by Wall Street and the 1% and Sanders has made clear he is no friend of theirs. $hillary by contrast is perfect Wall Street 1% candidate. There has been no better friend to Wall Street at the expense of Main Street than Bill and $hillary Clinton.