The American media has been abuzz about the adventures of an American dentist who bagged a beloved 13-year old lion, Cecil, during an expensive hunting safari to Zimbabwe. Much closer to home, one of Indiana's most prominent businessman has landed more than his share of big game on safaris he's taken to Africa and elsewhere. Steven E. Chancellor's sprawling Evansville mansion where he hosts presidential candidates and other politicians for high-dollar political fundraising events has been described by his guests as a virtual museum for all of the exotic game he's killed. But you don't have to visit the American Patriot Group's CEO's Evansville home for proof of his big game hunting prowess. Photos of his kills and a personal testimony can be found on Rann Safaris website. "My lion hunt with Rann Safaris in Botswana was beyond my expectations," Chancellor is quoted as saying. "Jeff Rann, my professional hunter and I saw many mature lions during our lion hunt. It was a unique and wonderful experience. A memorable hunt," Chancellor is quoted as saying. Thank you Jeff."

Believe it or not, Chancellor's big game exploits became the topic of a 2001 news story in the Chicago Tribune. Chancellor was using his political muscle at the time to try to get the Botswana government to lift its ban on lion hunting. He added muscle to his lobbying efforts with letters of recommendation from his good friends, including former President George H.W. Bush, former Vice President Dan Quayle and Gen. Norman Schwarzkopf. All four men were described as being members of Safari Club International, an advocacy group that promoted big game hunting around the world. The group was accused of offering a Las Vegas trip and other offerings to Botswana's president at the time to win favor. "Your millionaires are anxious to shoot our lions," said a senior government official in Botswana, which imposed the one-year hunting ban in February to assess the health of its big cat populations. "They've got these political blokes to back them up." 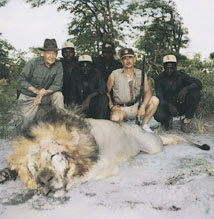 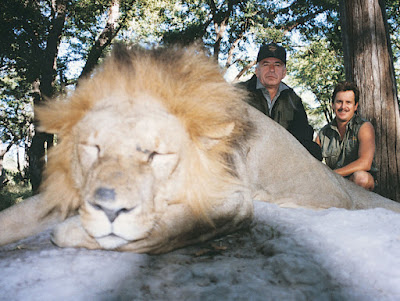 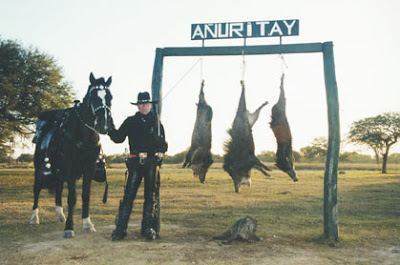 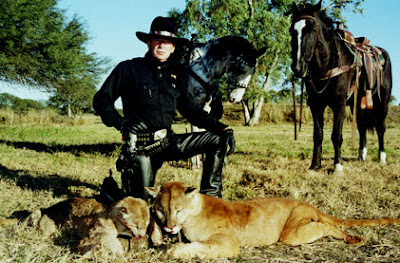 What a disgusting man on every level.

No kidding -- the guy's a Republican? He makes his fortune peddling MREs to the military.

It's my belief the same people willing and able to pay large sums of money to hunt internationally are the same people spending large amounts of money to travel to certain countries to have sex with children. I would bet a king's ransom the list of world-traveling pedos and hunters overlap. The public should scrutinize these influential wealthy world-travelers more carefully.

Like any other day in the land of Sperg0KKKrat, Eurofagonia the emotions outweigh nature and the facts.

How many of you jerking sperg0KKKrats remember the french dude that kicked the squirrel into the Grand Canyon? Ahahahahahahaha you 5 minute attention span children won't even remember this next week

never mind the state sponsored genocide of Abortion. What was the tally last year? 300k murders of convenience.

How many dead here in Napghanistan?

Your tears are fake, LIARberals.

Who cares? There's nothing wrong with big game hunting, or any hunting.

The only reason there is story with the other lion, is because of questionable legality in how the hunt was conducted, and animal right crazies, saying crazy things.

Chancellor is a nominal Republican like the Bushes, but he owns a piece of Evan and Susan Bayh as well. His political influence is not limited to Republicans by a long shot.

Hunting Hogs in Texas can be quite dangerous. They are escaped animals that rapidly revert and cause a lot of damage to fields and farms. I hear we have the beginnings of a wild pig problem in Indiana. Now if he is setting out corn in a fenced field that is not sporting. Being duded up like Hopalong Cassidy looked kinda dopey but sausage is sausage, and ham is ham.

Anon 9:02. Lived in the TX Hill Country for awhile. Lots of feral hogs. They're tough on vehicles, too. They don't look that big but if you hit one, it's more like hitting a tree than an animal.

Funny how the world is up in arms over poor Cecil when premeditated in utero infant vivisection has vids of hitler - level evil released.
https://www.youtube.com/watch?v=wV2U9unI1NM