Just got this "important announcement" from Evan Bayh that he is fully supporting Hillary Clinton for president in 2016:


Earlier this month, Hillary Clinton formally announced her campaign to be our next President. 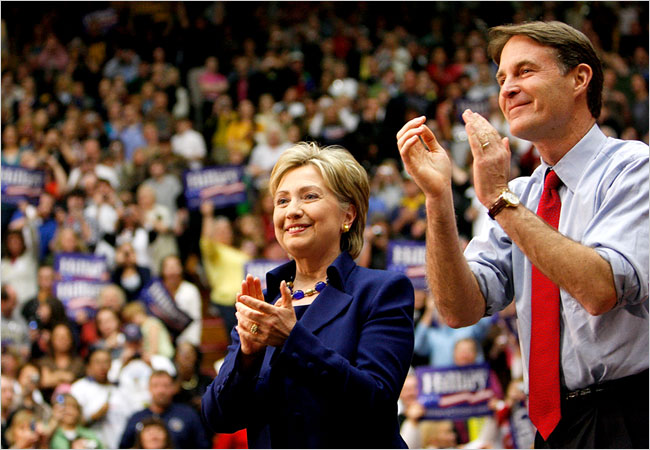 Now it's time to make an announcement of my own: She has my full support, I’ll do everything I can to help her, and I hope you will, too.
We've been friends for years and served together in the U.S. Senate, and Hillary has never forgotten who she is or where she came from.

She's always been a strong champion for the American family and those who work hard to get ahead and stay ahead.
We all know things have been challenging for middle class families but are finally getting better -- we've added more than 11 million new private sector jobs since 2009.
But we need a strong leader to continue that growth and turn economic data points into better-paying jobs and a chance for everyone to succeed.
America must be a land of opportunity for everyone, not just the fortunate and the few.
That's why I'm reaching out to you now to ask you to support Hillary as she ramps up her efforts.
This campaign isn't about her. It's about the American people and what we can do together to help.
That's why you'll continue to see Hillary interacting one-on-one in local communities with folks who are most affected by what happens in Washington, D.C.
Your voice is the voice that matters.
So will you commit today to a contribution of $50, $100 or whatever you can afford to help keep that conversation going as we head into 2016?
Next month, Hillary will unveil a broader agenda shaped by the people she's meeting across America right now.
With your support, we can show those who would reverse the progress we've made since 2009 that America is not going backward. We are finally moving in the right direction, and Hillary is the right candidate to lead us forward.
I'm proud to call her my friend, and I hope you'll be part of our team.
Best wishes,

I need a barf bag - "Hillary has never forgotten who she is." Yes, Evan she is like you a Shape Shifting Corporatist.

Hillary has been running for President ever since her defeat by Obama in 2008. By this time (no pun intended) you might think Hillary would have well thought out Agenda to lay out in front of the American People.

Hillary is already on her escape and evasion course on providing her position on the Trans Pacific Partnership (TPP) another NAFTA brought to us by her husband.

Obama is for TPP. The corporate wing of the Democratic Party must stick together - Clintons, Bayh and Obama. However, two real Democrats oppose it Bernie Sanders and Elizabeth Warren.

For Evan Bayh, how telling about his ignorance. All the rats are jumping off the sinking trash barge that is the HMS Hillary Rodham Clinton except for Evan... but he is just another liberal Democrat 1%-er like Bill and Hillary Clinton... yes, a barf bag is SOP when it comes to any of these liberal Democrats.

Whenever I see Bayh on tv the song "What's it all about, Alfie" comes to mind.

With the RINOS in the Senate who voted for Lynch, there will not be an investigation of Clinton and her violation of her MOA with the Government influence peddleing with Foreign Government officials.