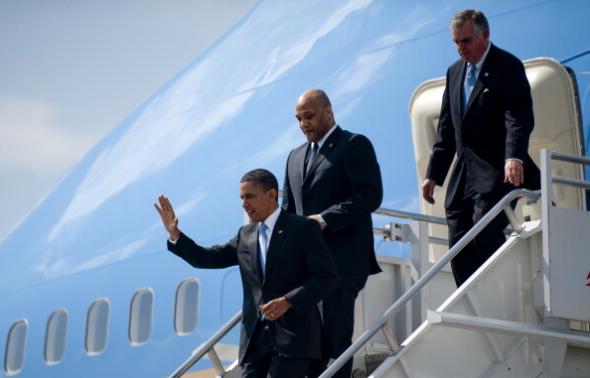 Politico is reporting that House Minority Leader Nancy Pelosi (D-CA) will appoint Indiana's U.S. Rep. Andre Carson (D) as the first Muslim member of the House Intelligence Committee. Pelosi reportedly told Democratic members of the appointment during a closed-door meeting this week. "The announcement comes in the wake of a terrorist attack in Paris by Islamic extremists that left 12 people dead," Politico reported. Some of the nation's most sensitive national security matters are shared with members of the respective, select intelligence committees in the House and Senate.

Carson touted his prior work at Indiana's Department of Homeland Security's Fusion Center during his first congressional bid following the death of his grandmother, the late U.S. Rep. Julia Carson. The administration of former Gov. Mitch Daniels transferred Carson from his normal duties as an excise police officer with the Alcohol & Tobacco Commission to the sensitive role to bolster his credentials for a future run for public office in anticipation of his grandmother's impending death from terminal cancer, a fact she withheld from voters when she ran for re-election in 2006. In that role, the younger Carson was required to spy on the activities of some of his fellow Muslims.

Carson was chosen by Democrats on a first ballot in a crowded caucus election conducted by state party officials in January 2008 that included several prominent local Democratic officials prior to the special election to replace his grandmother, which some political observers believe was rigged. Two electronic voting machines owned by the Marion Co. Clerk's office used to count the votes were reported stolen by a Democratic party worker hours after that caucus vote when a car in which they were being transported was broken into while parked outside a restaurant in Broad Ripple. Carson went on to defeat Republican Jon Elrod in that 2008 special election and has easily been re-elected in subsequent elections.

Carson's first election to Congress came only months after he was appointed to a seat on the Indianapolis City-County Council after this blog exclusively reported his predecessor, Patrice Abduallah (D), had claimed an uninhabitable vacant home in the district as his voting residence when he in fact resided in another home outside the district, a fact known by county election authorities for some time but ignored. Abduallah abruptly resigned from the council but was never charged with a crime like former Indiana Secretary of State Charlie White, who faced seven felony charges for casting a vote in a single election at a precinct outside his Fishers town council district. He was later forced to give up his office when he was convicted of six of seven of the vote fraud-related charges, three of which were recently overturned by the Court of Appeals. Carson was allowed to take Abduallah's place on the November ballot that year despite the deadline having passed for a replacement candidate.
Posted by Gary R. Welsh at 12:34 PM

There were always rumors that Carson only got in the Excise Police because of Granny.

Also, that he wasn't even required to complete the Academy.

Gene Honeycutt took the fall for that ordeal. Carson finished second-to-last in his law enforcement academy class. Most of his personnel file was seized by Scott Newman's office during the ATC investigation and was never returned to the file.

Is there no way the people of his district, be they democrats or republicans, or both, come together to out this man. His history is an embarrassment to the office which he holds. I fear that he is there via party politics alone. Gary, what type of movement would it take? While I am conservative, I would join, and have, any serious democrat that would take him on.

The district was drawn by Republicans to ensure Carson's re-election. The Marion Co. GOP will not support any campaign to unseat him. Unless a person is capable of self-financing their own campaign, the candidate will not be able to raise money to mount a serious challenge to Carson.

My comment was snarky and inappropriate. I'm trying to turn over a new leaf, so I'm sorry. I deleted it.

Gary is correct that the Marion County GOP will never mount a serious offense to unseat Carson. My experience as a former "grass roots worker" caused me to hear all sorts of insidious reasons why... some I believe others I doubt.

Suffice it to say that there are reasons Andre Carson remains in office and those reasons have little to do with the will of the voters in the district.

Nancy Pelosi LIED. It was not Islamists who were guilty of that attack in Paris, but the Illuminati. I hope and pray that Andre TELLS THE TRUTH about the real terrorists who are guilty of thes false flag attacks, including that on us on 9/11, but won't hold my breath.

As a member of such a sensitive House Committee, while representing us, I hope he announces, as he should, what VidRebel today reports:

"There are 30 Families and 6,000 Minions who run the world through the Bilderberg Society, the Trilateral Commission, the CFR, the Royal Institute for International Affairs and affiliated groups. The top Family is the Rothschilds. The 30 Families and their 6,000 Minions have power because they Print Money and control our financial assets. Of course, they steal money from us by the tens of trillions.

The people on the bottom half of society are ignorant of economics and history. Democracy means nothing unless you can get your views heard in the press."

I wish our congressman would also screw up the courage to add:

"There is not one organization in America with a million members capable of saying No to Wall Street and to Israel that has not been infiltrated by the FBI. That is why our last remaining hope is a US military coup led by junior officers, who had been told to go to war by the American Teleprompter Reader. Divine Intervention is just about our only other hope."