Don't Be Fooled By Doomsday Reports On Pacers Negotiations 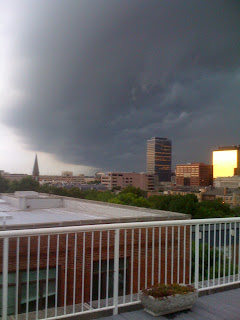 Like a well-trained dog, local news media jumped all over the discovery today at a CIB meeting that the Pacers and their shills at the CIB had failed to reach an agreement on the billionaire Simons' demand that the CIB either pick up the $18 million a year it claims it incurs in maintenance and operating expenses on Conseco Fieldhouse, or they would take their loser Pacer franchise to another city. The Pacers had set a June 30 deadline for their extortion demand, and this is the last scheduled meeting of the CIB for the month of June. The media immediately pounced on the news as a doomsday scenario where the City would become India-No-Place if a deal wasn't reached. Things are not always as they appear.

The news media never tells the public that the Simons can only move their team to another city if the Simons find a buyer and sell the franchise, and even if they can manage to pull that off, they will still have to pay at least a $50 million penalty to the City for breaking the lease. As I see it, it's a win-win situation if the Pacers actually sold their useless NBA team and got the hell out of town. We can find plenty of higher priority things on which to spend that big penalty money than forking over more subsidies to the state's wealthiest family. Don't get your hopes up though. This is all just posturing on the part of the CIB to make it look like they are trying to drive a hard bargain after this blog exposed the potential for collusion between the negotiator who supposedly represents our interests and the Simons. With FBI agents asking a lot of questions of corrupt local pols as of late, perhaps these self-dealers decided it might be in their interest to cool their heels a bit for now.

Woudn't it be nice if we had someone in our city government that has the good sense of Las Vegas, Clark County, Nevada where the Controller came to the following conclusion in recommending against a new publicly funded arena to lure an NBA team to the city:

Numerous studies have come to the conclusion that the economics of an arena with sports franchises are worse than without. The primary reason is that the team owners and athletes tend to be the recipients of significant portions of the arena revenue streams and spend those monies outside the metropolitan area.

Amen. Check out the findings of Clark County's Controller here. It essentially reaches the same conclusion this blog has been trying to tell you for the last couple of years about these huge public subsidies to lure professional sports teams to this city. It is a lose-lose proposition. The Simons don't live in Indianapolis, and most of their NBA players live and spend their huge salaries elsewhere. The Pacers are a huge economic drain on the city.
Posted by Gary R. Welsh at 7:38 PM

We've learned over the past several months that the Pacers have lost money for most of the last 27 years or more.

So wouldn't that mean they knew perfectly well 10 years ago that they were entering into a contract that they'd have trouble fulfilling? (Yeah, I'm taking them at their word about having money trouble).

This is one huge scam being put over on us.

Thanks for reporting on this. I would assure people though that the penalty is a lot more than $50 million.

Two forumulas are used in the contract, one based on sales price times a percent that declines every year, the other is $50 million plus an amount that declines every year. One would produce about $160 million (assuming a fair market sales price) and the other $142 million penalty this year. You always take the lowest penalty when looking at the formulas.

People have focused on the $50 million in one of the penalty formulas because this is the only concrete number that is in the penalty provision. Figuring the rest of the formulas involves a lot of math.

Actually we haven't learned that at all. If the Pacers lost money that many years in a row, the IRS would have reclassified the organization as a hobby which would cause it to lose business deductions.

Since the Pacers won't open their books, I think it's safe to assume the owners are trying to hide something.

Here's my question, and no one seems to answer it.

Where do the Pacers, in this economy, think they will go? What city in its right mind would shell out money to build them an arena or update an existing one to the level of what they have right now?

There are no cities that will support the Pacers any more than basketball-crazed Indianapolis will.

In my view, the city owns it all in this negotiation, and I think they would have a much better chance of getting another franchise given our traditional support of basketball should the Pacers leave.

Ballard and the city should call the Pacers bluff.

That would assume, Jon, that the CIB was on the side of taxpayers and not the billionaire sports team owners. As the CIB has shown time and time again, it exists only to put money in Jim Irsay's and the Simons' pockets and to pick our pockets for every last dollar they can get, and when they're short, they simply borrow money and go deeper into debt. The CIB tore down Market Square Arena and the RCA Dome without ever paying off those buildings; it simply rolled the debt into even larger debt represented by the construction of the newer facilities.

Paul, I was being tongue in cheek, musing on their standard line of BS.

As it's a popular phrase these days, I'll use it too: The Pacer's true financials are the 'elephant in the room.'

The Pacer's shoud be granted Free Agent status just like a player. Show us an offer from another bidder and we can talk about matching it. Otherwise, take what your contract provides for and shut the hell up.

I believe the reason they are having so much trouble is the relentless exposure you and Paul Ogden have given to this grab of our money to give to millionaires.

You will recall that you were exposing the fraud of the Pacer's bailout even back in March of 2009 at Revolt at The State House, the event ridiculed by the likes of Jim Shella and Abdul.

By the way Gary, did you shoot that picture from your condo last night? It sure looks like yesterday evening's storm.

Keep strong guys and keep hammering them on this issue.

Yes, Melyssa, I took the picture from the deck on my building last night. It's a great vantage point to watch storms rolling into the city.

Is that a Page condo?

Are you kidding? I would never live in one of the condos he developed.

Gary? Can I come over the next time it storms? I'll bring wine!

I used to live at the Marott in the 80's and I would go up to the roof every time there was a storm with a bottle of wine. That was the best. Last night I watched the storm from my street level front porch...not as good.

And so WHY are they even contemplating anything welfare to the Pacers?

Yeah, I warned about that several months ago, Downtown Indy. The City is bankrupt. That's why the idea of borrowing all of this money for pork barrel projects makes absolutely no sense at all. The City will be facing draconian cuts here in a few months.