What Constitutes A Serious Bodily Injury? 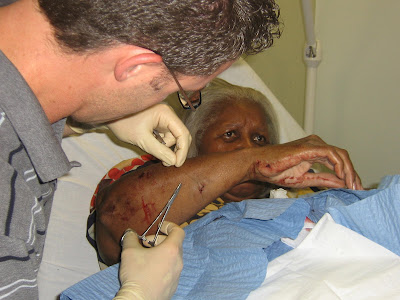 Shirley Pinner has lived at the same home on Temple Avenue in Indianapolis for the past 30 years. On August 24, her neighbor's pit bull dog attacked her and caused serious bite wounds to her arm. The attack has left her with recurring nightmares, anxiety attacks and fear of walking outside her own home to sit on the porch. Believe it or not, the dog that attacked Pinner and another pit bull that was apparently roaming freely in the neighborhood the day of her attack were never seized by Animal Care & Control. According to an e-mail Pinner's granddaughter, Yolonda Madison, received from IACC Director Doug Rae, city prosecutors determined that the injuries caused to Pinner by the pit bull did not constitute "serious bodily injury". As a consequence, Rae claimed IACC was without authority to impound the dog, noting the dog owner had no prior violations. In an e-mail to Councilor Mike Speedy, Madison complains about the lack of responses she received from the City in response to the concerns she raised in her grandmother's case. She complains that she received no responses from Mayor Ballard, Public Safety Director Mark Renner, Drew Carlson in the Corporation Counsel's office or Media Wilson, Director of Community Outreach for IACC. Rae sent a lengthy e-mail to Madison explaining what had transpired in the case. Given the number of serious pit bull attacks within the City over the past year, one would think there would be no debate over whether to impound the dog in question.

UPDATE: Fellow blogger Paul Ogden has more on the debate over whether IACC Director Doug Rae should stay or go. The Ballard administration recently placed him on probation and canned the IACC advisory board's chairman, Warren Paititz.

UPDATE II: WRTV's Joanna Massee has followed up with an excellent story of her own here. Councilor Mike Speedy calls on the City to impound the dog that bit Pinner. The corporation counsel's office gives Massee the impression that decision hasn't been made yet, even though e-mail communications to Pinner's granddaughter from IACC's Rae made clear the city prosecutors had already determined the dog would not be impounded. Maybe they're just reconsidering because of the focused public attention on the case.
Posted by Gary R. Welsh at 6:38 AM

This whole ACC deal has been really unfair to Rae and his supporters. I disagree with his philosophy that amounts to serving animals before people, but the city hired him knowing full well what he intended to do with the agency. Now that his methods have had the predictable result of reducing ACC´s emphasis on protecting the public, Ballard is making sure the buck stops well short of himself.

One day last year while driving, I saw a stray dog running through and across yards around 54th and Illinois. I'm not an expert on dog breeds, but this was like the pictures I've seen of rottweilers, or a mix, as it was a little bigger than the pit bull pictures I've seen. The dog appeared to have been restrained at one time, as it was dragging a rope or a chain of some sort. Since I often walked my infant granddaughter in a stroller in that neighborhood, this was really scary. A grandmother and infant would have little defense against an aggressive dog. In your own neighborhood, shouldn't you get to take a walk without worrying about a dog lunging at you?

I disagree with D. The city was lied to by Warren Patitz and that is why Rae was hired. The Animal Commission made the decision on him, not Newman. Newman thought he was doing the right thing by taking their recommendation. Only thing was Newman was not given the background on Rae from Philly. While as Chief Operating Officer in Philly, Rae failed to provide even basic care according to the PSPCA. The PSPCA was on the verge of filing cruelty charges. Instead an RFP was issued "overnight", Rae's group didn't bid and he and PACCA were out. The City of Philly issued an audit they did showing that records were not kept properly.http://www.philadelphiacontroller.org/page.asp?id=340
Bite cases were euthanized early forcing people to undergo rabies treatments.

Don't you think if Newman knew all of this that he would not have hired Rae? Who would?