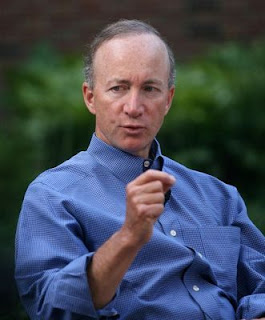 All eyes are on Gov. Mitch Daniels as he announces his re-election bid today at Butler University's Hinkle Fieldhouse. In a wide-ranging interview with reporters, Daniels clues us in on what his campaign will hold for voters. Let's begin with the controversial constitutional amendment to ban gay marriages in Indiana. It will not be a part of Daniels' campaign reports the Star's Mary Beth Schneider. She writes:

While Republicans running for the legislature are likely to be campaigning heavily on the need for a constitutional amendment to ban same-sex marriage and on immigration reform, Daniels said neither issue will get emphasis from him.

"I do believe there are other things more important to our future, at least other things that a governor and the people around him can try to work on," he said. "And, secondly, I'm always trying to bring this state together, and we don't have, I don't believe, the luxury of division."

That statement is not likely to endear him to social conservatives like Eric Miller and Micah Clark, but I suspect Daniels has caved to their demands sufficiently since he, in their judgment, mistakenly extended the state's non-discrimination policy covering sexual orientation and gender identity in the first few months he took office. The "In God We Trust" license plates are a good example of this. Daniels' BMV have been handing out the license plate to Indiana motorists as if it were the standard Indiana license plate--a move which is costing Indiana taxpayers millions. While Miller, himself a primary opponent of Daniels in 2004, has kept alive his campaign committee, neither he nor any other social conservative has been making waves about challenging Daniels in the GOP primary next year.
The focus of Daniels' campaign will be "the economy, job growth and education, along with government reform." He will also renew his plan to privatize the Hoosier Lottery to fund higher education initiatives. "I very much hope to see us capture the value that is there (in the lottery), but not for its own sake. Never. Always the question is: In what could we reinvest those funds for the long-term good of this state? Education comes to the top of my list, but there are other possibilities."
And Daniels doesn't see daylight savings time as being a factor in next year's election. "I don't hear much about it anymore. Some folks don't like it, of course. But honestly, I hear less and less," he said.
Asked if he's a good listener, he insists he is. "It would probably be hard to find somebody who's done more listening than I have," he said. The Democratic Party's Dan Parker takes issue on this point. He cites the Governor's failure to listen to opponent of the privatization of the Indiana Toll Road and to lead on the issue of property tax reform. "The governor put nothing on the table," Parker said. "He has not done a thing about property taxes. It was legislative leaders who took on that issue."
Right now, history is on Daniels' side with respect to his re-election chances. No elected Indiana governor has ever lost his bid for re-election since the Indiana Constitution was amended to allow a governor to seek more than one term. There's always a first for everything though. I don't see any signs the Governor is taking anything for granted when it comes to his re-election campaign.
Posted by Gary R. Welsh at 8:27 AM

"The "In God We Trust" license plates are a good example of this. Daniels' BMV have been handing out the license plate to Indiana motorists as if it were the standard Indiana license plate..."

No dispute on the cost, but there's a huge sign at the BMV with "OR" in the middle of it. Don't you think a more accurate statement would have been "Daniels' BMV has been handing out the IGWT plates on request"?

"I don't see any signs the Governor is taking anything for granite..." ???

Does this mean his positions aren't written in stone? Does this mean he is hard-headed? Has Mitch reverted to his Princeton college days and is stoned again?

It's sad when I can read a post, and midway through it think to myself, "Wilson will be one of the first 2 commenters, and he's going to post about Gary's mistaken use of 'granite' as opposed to 'granted.'

I'm about done reading comment threads on Indiana blogs. Wilson is ruining them all. Really takes away from the enjoyment.

Get over it -- particularly when the "granite" error happened at the very end of the post, not midway through as you falsely indicated by your whine ... but then, if you want to silence a liberal commenter, "any stick will do to beat a horse".

Thanks for keeping me on my toes. That's not the first time I've inadvertently used "granite" instead of "granted." Lance, I've heard more than several accounts of the BMV employees pushing the "In God We Trust" plate over the regular Indiana plate. This is by design. Check the inordinate number of the plates the BMV ordered from the start and you can tell there was a deliberate plan to flood the highways with these plates to appease the religious right, which pushed the legislation creating the plate.

11:04,
I'm tired of Wilson46201's vitriolic diatribe as well.
I've seen more than one blog bite the dust because of people like this guy monopolizing the posts. Time to move on.

The odd part about it all is that the two things that might kill him are DST and the Toll Road deal. On top of that (even though I don't think it's his problem specifically) the electorate is going to be out for blood in 2008 if something DRASTIC isn't done about property taxes.

The IGWT license plates might have been his saving grace (because it's an automatic thumbs up from most Hoosiers), had it not been for the fact that lines and wait times are larger than they've ever been in years.

What might save him is a weak Democratic candidate. If they're as stale as their choice was for Speaker of the House, Democrats probably will lose.

On top of that all, Bush is ignoring his poll numbers and doing whatever it is that he wants, politically. You can feel the pressure building, in public opinion. If he continues down this path of destruction, riding Iraq into the 2008 elections, Republicans will lose everywhere.

Unlike you, Wilson's name is at the top of his comments. When you see it, why don't you just skip on down to the next comment? No-one forces you to read it.

You, on the other hand, DON'T put your name at the top, so thinking it may possibly be someone besides a whining piss-ant, we are forced to read.