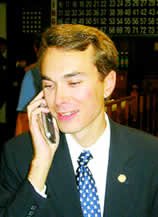 Things are falling into place for Republican Senate candidate Greg Walker in his bid to unseat Senate President Pro Tem Bob Garton. First, Walker picks up the endorsement of the Indiana Right to Life Committee. Then he picks up the support of the American Family Association of Indiana. And yesterday J. Patrick Rooney, former chairman of Golden Rule Insurance Company and founder of Medical Savings Insurance Company kicked in $5,000 to Walker's campaign according to a supplemental report filed by the Walker campaign today.

It was about this same time in the last campaign season that Rooney kicked in a large contribution to another young upstart, Brent Waltz (R), who went on to defeat one of Indiana's most powerful legislators, long-time Senate Finance Committee Chairman Lawrence Borst (R). Are similar late contributions from like-minded conservatives enroute to Walker's campaign as we write? Is Gov. Daniels' choice to be Indiana's new GOP national committeeman, Jim Bopp, behind these efforts? Or are those efforts to oust Garton coming from within his own caucus?

We drew a comparison to the Borst-Waltz race as soon as Walker announced he was going to take on Garton. It turns out there may be more in common with the two races than we first expected. Rumors are abuzz today that Waltz is doing some behind-the-scenes work to help out Walker's campaign to make sure Garton doesn't return to the Senate so that the ultra-right can select one of its own as President Pro Tem.
Posted by Gary R. Welsh at 8:46 PM

"to make sure Garton doesn't return to the Senate so that the ultra-right can select one of its own as President Pro Tem. ".

I don't care much for Garton but God help us if we have BBoz in the house and a yet to be crowned ubber winger in the senate to match.

Really, Gary, I can't understand the disconnect that allows you to remain in the Republican party. For all your efforts to "change them from within" it appears you r party is going even further to the right!

I love how you characterize us who loathe Sen. Garton's anti-life positions as "ultra-right." Technology--including 4D ultrasounds and the Human Genome Project--have served to humanize the unborn child, and more Hoosiers in the GOP understand this every day. That is why we have made such strides within the party.