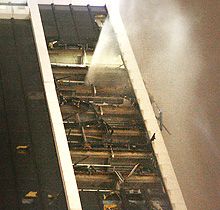 Tens of thousands of people were packed into downtown tonight to watch John Mellencamp perform at the NCAA My Coke Fest concert on Monument Circle. When Mellencamp ended his performance at 9:00 p.m. about 50 minutes after he started, people were disappointed. But when the civil defense sirens went off ten minutes later, it became apparent the concert could not have ended sooner. The storm rolled in quickly by the time I arrived at my home in Lockerbie. A large flash in the middle of the storm looked like a lightning bolt striking the Regions Building. By the looks of this photo on the Star's website, the building sustained quite a bit of damage. There have been reports of a small fire inside the building in addition to the blown out windows covering several floors. Police have closed off the streets on all sides of the building. The high winds were very short-lived here in Lockerbie followed by a brief downpour.

UPDATE: Reports early this morning suggest that a tornado may have swept through downtown Indianapolis last night. WIBC reports that a number of streets are closed off this morning either for clean-up of last night's concert on Monument Circle or damage from the storm. One observer told the Star that he saw the tornado on the ground at the corner of New York and Delaware just 3 blocks from my home and immediately northeast of the Regions Building, which sustained heavy damage. When we experienced the strongest winds during the storm in Lockerbie, the downtown skyline, which is typically visible from my home, disappeared in the storm. The Star also reports that its building, which sits on Pennsylvania between Vermont and New York Streets sustained damage.

Regions Building will be closed today according to WTHR, which reports there is concern about the structural integrity of the building. Mayor Peterson described to WTHR the extensive damage inside the building after inspecting it earlier this morning. He told WTHR that there was twisted metal everywhere, and that entire walls were missing from several offices. The skin of the building is literally bowed out in one location. The earlier reports of a small fire in the building were in error, although the building's sprinkler system prematurely activated as a result of the damage.
Posted by Gary R. Welsh at 10:33 PM

We had a whole bunch of papers in our front yard (patch of grass) near Lockerbie. Scary stuff. The storm, that is, not the papers.

There doesn't seem to be much debris in our immediate neighborhood, but we have several good windbreaks that protect us--such as the Regents Building.

I read your post on the commercialization--I didn't even notice he had changed the lyrics. The sound quality wasn't the best where I was standing.

I don't know if you saw Carrie Underwood's performance, but it couldn't end soon enough for me. She kept saying it was the first stop on her tour, and it really showed.

I think I might've been wrong with my prediction. I couldn't hear very well, either, but I think Mellencamp left the lyrics alone. And we'll hopefully never have to hear the television spots again.

As for the debris, there's not much between us and the Regions building, so we wound up with all sorts of fun stuff in the community park and in our front yard.

I had to walk back to 10th & Broadway after the concert ended. I knew I was in trouble as soon as I heard the sirens. I'm still a little disturbed by all the reports of damage. I walked by the Star's building not more than a few minutes before the storm really hit. I ended up flat-out running from about the Red Cross building to my destination. For an overweight, out-of-shape, and slightly drunk guy, that's no smal feat.