Lugar Flashback: Misbehavior Of Politicians Must Be Reported 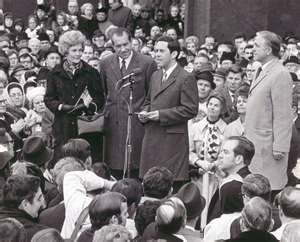 After thirty-five years in the Senate, it must have seemed like second nature for Lugar and his supporters to respond to an Indianapolis citizen activists' efforts to shine light on the fact that Sen. Lugar stopped living in Indiana in 1977 despite claiming a residence here for voting purposes by accusing him of wrongdoing. Greg Wright, a 70-year-old long-time resident, former school board member and certified fraud examiner, recently discovered that an anonymous complaint with the Lugar campaign's fingerprints written all over it had been filed against him with the American Certified Fraud Examiners, accusing him of showing "bias" and conducting a "personal political agenda" in violation of the organization's rules of conduct by investigating Lugar's residency problem. The complaint urged the organization to  "expel, suspend and/or discipline Mr. Wright."

A 1976 story reporting on Lugar's campaign for the U.S. Senate against Sen. Vance Hartke that ran in the Indianapolis Star has been uncovered discussing a speech Lugar delivered to journalism students at Indiana University urging them to "blow the whistle" on politicians who misbehave. According to the story, Lugar was interviewed by 150 students attending a journalism institute at IU in Bloomington. "Lugar said he considered it the journalists' duty to "blow the whistle" on misconduct which might affect government operations or policy." "He told the young journalists they will control the conditions that will make democracy survive or fail for another 200 years," the story continued.

Students probed Lugar about the corruption problem in the Indianapolis Police Department while he served as mayor. Lugar told the students "he tried to probe the allegations of corruption" within the department but that "much more needs to be done." "As never before, citizens are demanding officeholders who will shun the old slippery ways, the loose moral conduct and the casual taking of fringe benefits and taxpayers' dollars," he said. In response to recent reports at the time of sexual favors being provided to lawmakers, Lugar told the students the news media "had a moral responsibility to report politicians' moral misbehavior."

John Michael Vore has been researching the goings-on in Indianapolis back in the Lugar years and reporting his findings at his blog, Hoosier Hysterias. His findings suggest that Lugar's efforts of giving the appearance of cleaning up the police department had more to do with window dressing for his first, unsuccessful Senate bid in 1974 against Sen. Birch Bayh. Vore finds another story that ran in the Star the Sunday before the November election where then-Sen. Bayh reacted angrily to Lugar calling him a "liar" whose "vote can be bought for $2,500." And you've been told by local reporters that Lugar has never had to run a negative campaign before this year. Obviously, those reporters at the Star don't read the archives of their own damn newspaper. "On the local level, Lugar has been embarrassed by revelations of police corruption within the Indianapolis Police Department and the FBI investigation of his campaign manager, L. Keith Bulen, who has announced his resignation as Indiana national GOP committeeman although no charges have been made against him," the Star reported in the same article.

Interestingly, there is no mention in the story of Lugar's talk to the IU students of how the former Marion Co. Prosecutor, Noble Pearcy, had trumped up a criminal indictment against two Indianapolis Star reporters who uncovered the political corruption in his police department and who won a Pulitizer Prize in the process in retaliation for their efforts to "blow the whistle" on public corruption. It looks like the young journalists like those Lugar spoke to back in 1976 failed to "control the conditions" so that Republic might survive another 200 years. Instead, they chose to jump in bed with the misbehaving politicians.

UPDATE: Vore's research also caught a "swiftboat" moment for Mitch Daniels, who worked as a campaign operative under Keith Bulen during Lugar's 1974 senatorial campaign against Sen. Bayh. It seems the Lugar campaign sent out a campaign missive accusing Bayh of not being a military veteran unlike Lugar, who served in the Navy. Bayh did serve in the U.S. Army from 1946-48, which included a tour of duty in Germany. "It was a a mistake . . . an honest mistake and we admit it," said Daniels, who never served in the military, about 600 letters that were sent out to military veterans by the campaign.
Posted by Gary R. Welsh at 6:35 PM