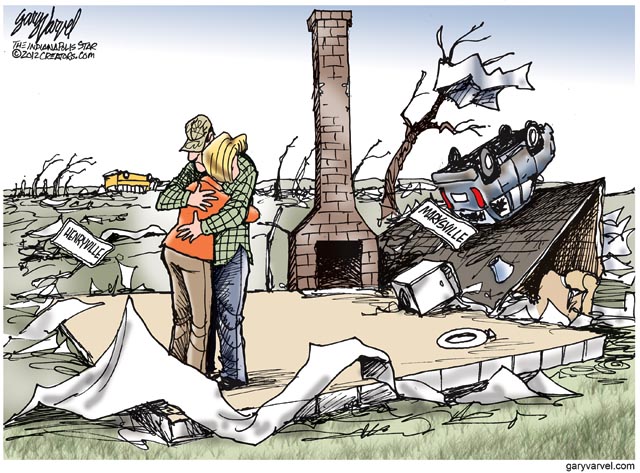 Star editorial cartoonist Gary Varvel captures the perfect image in the aftermath of last Friday's devastating tornadoes that swept through southern Indiana. It is always amazing that most people in the path of these incredible forces of nature are able to survive to talk about it. Thirteen seems to be the unlucky number of people who did not survive the storm, including the young toddler, 15-month old Angel Babcock, who was found all alone in a field. Contrary to early news reports, she was not carried by a tornado 10 miles from her home but rather a short distance.

Gov. Mitch Daniels was quick to survey the damage caused by Friday's storms and communicate the breadth of the damage suffered by communities like Marysville and Henryville to President Barack Obama and to the nation. U.S. Rep. Todd Young was on the scene surveying the damage with Daniels. Sen. Dan Coats was also quick to respond within hours of the storms hitting on Friday, assuring his efforts to bring quick federal assistance to the region. He was interviewed by national news networks. Missing in action was Indiana's Sen. Richard Lugar, who relied on his staff to put out statements expressing concern on his behalf. Indianapolis TV stations like WTHR and Fox 59 have been providing excellent coverage and have used their on-air coverage to solicit much-needed financial help to the badly-damaged region.

People are better at taking precautions now against tornados which have the highest wind speeds of any natural occuring event. Your house can survive a direct hit from a hurricane. But that same house is unlikely to survive a direct hit of a tornado, which I know all too well from the 1974 tornados that hit southern Indiana.