U.S. Will Be Impacted By Radiation Fallout Within Days After Nuke Plant Explodes 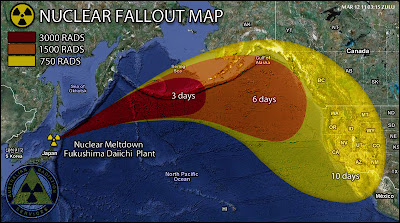 The Fukushima-Daiichi plant damaged in yesterday's devastating earthquake and tsunami in Japan has been rocked by an explosion and dangerous radiation is leaking from the plant. Late-breaking reports suggest hundreds have already been sickened by radiation exposure in the area near the plant. A fallout map shows the radiation could reach Alaska's Aleutian Islands within three days and the country's west coast over the next 6 to 10 days as the jet stream carries radiation clouds. People living in the affected areas might be well advised to take potassium iodide pills to help protect them from thyroid cancer. The pills have to be taken at least 6 to 12 hours prior to exposure in order to be effective. I suspect the U.S. government won't bother warning Americans living on the west coast of this danger. Poland, unlike other states in the former Soviet Union, immediately dispensed potassium iodide to its population after the Chernobyl nuclear disaster in 1986 and avoided the sharp increase in reported cases of thyroid cancer experienced in neighboring Soviet states.
Posted by Gary R. Welsh at 11:32 AM

Iosat potassium iodide is the countermeasure to radioactive iodine (I-131)-the common radioactive contaminate from a weapon detonation or a nuclear power plant accident. Currently, many websites are "out of stock" of the Iosat potassium iodide pills. These pills need to be taken prior to exposure to stop the thyroid from absorbing the radioactive iodine and protect a person from thyroid cancer(the most common cancer from exposure to the fallout). Locally (Indianapolis) fourteen day supply can be found over the counter for around $10.00. I am not trying to be an alarmist or a conspiracy theorist, but I do advocate people can take precautions for their family. If 750 rads can fall on Arizona, Indiana could receive some as well. Just food for thought.

Craig, That is good advice. Thanks.

Gary, thanks for this. I went out of town today and have not seen the news since this morning.

I have a sick feeling in my gut about the disaster in Japan like I did the BP oil disaster.

I think you are right about the Madras fault line too.

INFOWARS.com is reporting that the radiation could reach the U.S. within 36 hours.

It's not a bad idea for everyone to take the iodine.

From where was that map obtained? Any info on the duration for which you should take potassium iodide?

Where can I buy the iodine locally?

You can buy the pills online. If you google, you will find a number of websites selling them. I would also check with health food places like GNC. I don't know how long you have to take the pills. You can probably get that answer by googling.

The map of the areas likely to be impacted based on the jet stream accompanied a story on the European Times website.

WARNING!!! A few folks here are talking about taking "iodine." I believe that may be harmful. Please, do your research. Google IOSAT...don't think you can just take straight iodine. I heard that can be deadly. Please, make sure you do your proper research before this.

I think all pills are gone anyways. Nitro-pak, nukepills.com, all show showed out for IOSAT. I ordered directly from IOSAT, but their system isn't as advanced as the others. I have the feeling I will get an "out-of-stock" e-mail soon enough.

It would be helpful to cool things down a bit with some more up-to-date facts:

1. The plant is accessible. Personnel and equipment can and are reaching the plant
2. The plant is currently contained. Containment would need to be breached for the article scenario to ever happen. Believe me that loss of containment is the nightmare scenario that everybody is trying to avoid.
3. The plant is currently cooled. Sea water is not nice for pipes but that's a long-term corrosion problem that's going to cost money, not lives as it develops. Sea water is reaching the plant and if nothing else major goes wrong, this will suffice to keep cooling until natural cooling renders the plant safe
4. There is a real danger but keep your powder dry. The bad scenarios pretty much all require something else to happen. A massive aftershock could change things for the worse. Al Queda or some local cult could show up with some explode-a-dopes. It's possible. But it's also not that likely. It's important to prepare in priority order so you don't end up uncovered but with completely useless stuff in an emergency kit that was a waste of time for *your* emergency.

Having potassium iodide pills is not useless but it certainly is not top of the list of things that are probably missing from your disaster kit. Consult a local expert (start with your local PD) for what you should stock and take the opportunity to inexpensively acquire the stuff you don't have in priority order. In Indiana, you're much more likely to need fresh water (available from your tap with a little bleach for preservative) than potassium iodide. Get that first.

@TMLutas:
If that isn't the biggest load of disinformation. The Local PD??? Like they are likely to even have heard of KI2, let alone recommend what you need. They'll just look at you like you have three heads. This is a real threat that could possibly harm many.