Durham's Bugatti For Sale On E-Bay? 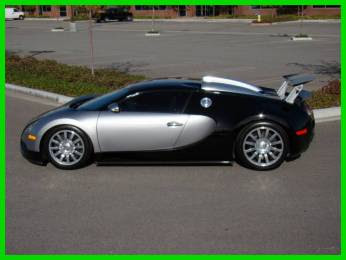 A source claims this 2008 Bugatti listed for sale on E-Bay for $1,225,000 belongs to Indianapolis businessman Timothy Durham. Click here to see a WISH-TV interview with Durham when he received delivery of the car. The U.S. Attorney's Office in Indianapolis originally filed a civil forfeiture action against Durham's assets but dropped the action days later without explanation. Recently, a yacht owned or once owned by Durham showed up in Turkey listed for sale at $4.78 million. A source tells me that Durham stated during a court-ordered civil mediation hearing in Grand Rapids, Michigan last week in another lawsuit against one of his companies that he could not transfer any assets without the prior approval of Winfield Ong, the Assistant U.S. Attorney who filed the original civil forfeiture action.
UPDATE: Fellow blogger Paul Ogden confirms the VIN numbers for the car matches Durham's.
Posted by Gary R. Welsh at 10:48 PM

Yet. decent parents still teach their children that crime does not pay. Thanks for trying to keep the heat on Durham and associates, AA.

Glad to know the car was "leased."

Pathetic. Someone should write a book, "How to Blow $200Million or more: The Tim Durham story."

Maybe it is leased. There is already one suit involving a vehicle purportedly sold without clean title.

The car is a lease...how can he sell it?

I don't think he could have leased a car he intended to race.

I agree with Gary. I don't think you can "lease" a car to race. Plus, it probably wouldn't have been listed in the forfeiture action if it was not actually owned by Durham.

Dan Coats will run against Bayh....

edueThe car was leased and probably is now repossessed. It was never intended to be "raced," though you can indeed lease a racecar. Nobody would actually race a $1.3 million Bugatti Veyron...though it is the fastest street car in the world. Maintaining it must have been...costly.

The motion to freeze assets was dropped. I don't think it is illegal for him to sell anything.