College Football On A Saturday Afternoon 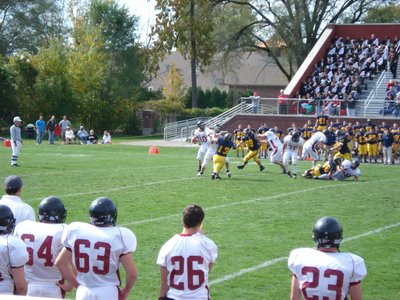 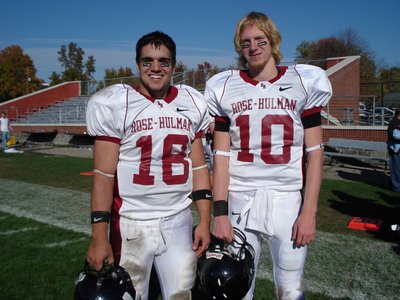 I don't typically take in college football games on a Saturday afternoon, but I made a special exception today. My nephew, Derek Eitel, is a freshman quarterback for Rose-Hulman. The Engineers had a tough day down at Franklin College. A tough defense kept the game within 3 points until the 4th quarter when the Grizzlies scored two touchdowns, giving them a 28-11 victory.

The Engineers were dealt a number of setbacks as a result of extremely poor officiating and a time-keeper who was working over-time to help out the Grizzlies. The clock had to be reset three times, largely because Engineer fans screamed out at the referees to correct the madness going on. When the Engineers had the ball on the one-yard line, referees called a personal foul on two Engineer players who were reacting to a Grizzly player who knew how to finger a guy in the eye through his helmet after the play was dead. The referees missed that and penalized the Engineers 30 yards. Needless to say, the Engineers didn't score on that play. The real kicker came at the end. The Grizzlies proved themselves to be bad winners by provoking a brawl that involved about half the players of each team and a couple of the coaches after the game ended.

The Engineers' starting quarterback, Cameron Hummel, is shown on the left next to my nephew. The action photo is one of the plays Derek quarterbacked. Unfortunately, that photo was taken immediately before an Engineer turnover. Starting quarterback Hummel led the offense most of the game. Derek has actually started about three games this year due to injuries suffered by Hummel early in the season.
Posted by Gary R. Welsh at 4:49 PM