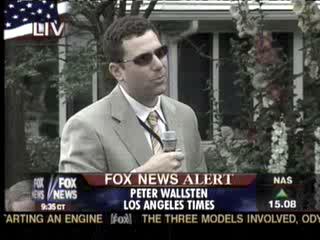 President Bush today took questions from the press during a Rose Garden event at the White House. Bush, as he so often does, attempted to lighten up things a bit in the awkward way we've come to expect. Bush tried this with the LA Times' Peter Wallsten with an embarrassingly, comical result. Here's the exchange:

PRESIDENT BUSH: Yeah, Peter. You're going to ask that question with those shades on?

PETER WALLSTEN: I can take them off --

BUSH: No, I'm interested in the shade look, seriously here.

WALLSTEN: All right. I'll keep it then.

BUSH: For the viewers there's no sun. (Scattered laughter.)

WALLSTEN: I guess it depends on your perspective.

Bush was obviously unaware that Wallsten is a blind man. To watch the video, click here.
Posted by Gary R. Welsh at 7:22 PM

Oh my God. I watched on television the exchange between Bush and the report..Only in American.