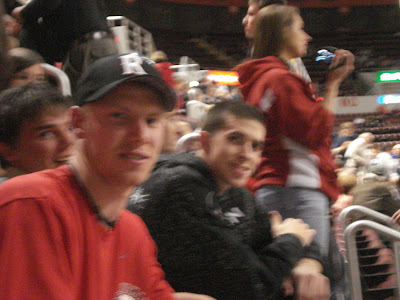 Well, this could be the biggest news for Indiana State University basketball since Larry Bird played for the Sycamores back in the 1970s and led the team to the NCAA final four championship game in 1979 against Michigan State University and Magic Johnson. I watched every game either in person at the Hulman Civic Center or on television that year. Jake Kelly, a native of my hometown of Marshall, Illinois, is leaving Iowa to play for the Sycamores? Perhaps. "Terre Haute native Jake Kelly, who played half his high school basketball career at Marshall, Ill., and half at Carmel, has 'asked and was given his release from the Iowa basketball team,' his father and Terre Haute resident Bob Kelly told the Tribune-Star on Thursday," writes the Tribune-Star's Craig Pearson. “He wanted to be closer to home after the death of his mother this past year,” Bob Kelly said. Kelly made the trip down from Iowa to Peoria to watch the Marshall Lions play in the 2A state championship finals this year. The picture above is Kelly with my nephew, Derek Eitel, who is the starting quarterback for the Rose Hulman Engineers and an ace pitcher for their baseball team (currently ranked 24th in the nation). He and Kelly played on Marshall's basketball team together Derek's junior year of high school and Jake's sophomore year before he moved to Carmel. My twin nephews, Lucas and Logan Eitel, will be joining the Sycamores team next fall. They both were chosen for first team all state in Illinois 2A basketball. I should also say this is the about the biggest thing that has happened in my small town of Marshall. Everyone is buying their season tickets for ISU basketball.
Posted by Gary R. Welsh at 6:58 AM