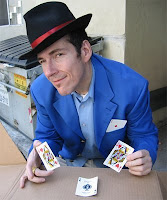 An astute reader shared this card game analogy with me on the real deal behind Obama's $1 trillion stimulus (spending) plan, which I wanted to share with you. After reading Biden's assessment that Obama has a 30% chance of getting it wrong with his stimulus plan, I think the reader is on to something:

I think I have figured out what Obama and Pelosi are doing by pushing their worthless $900 billion stimulus bill. The gist of it all is that they are dealing a game of Three Card Monte to clueless American taxpayers.

Lets start with the 3 cards on the table. The first card was the first $800 billion tarp BANK bailout that did not work. The second card was the Fed and Treasury cooking in another few trillion to the banks on the sly. The third card of course is Obama's $900 billion stimulus plan. Now we know what all the three cards are so it should be easy to pick the card that's a "winner" so the stupid taxpayer playing the game picks the $900 billion Obama stimulus card. The three cards get shuffled up, the taxpayer places his bet. When the taxpayer picks a card and the dealer turns it over the taxpayer finds he picked the wrong card and loses his money.
Curiously enough, the card that the dealer turned over was not even one of the original three cards. The card the dealer turned over was the TARP II card for an additional $3 to $4 trillion of bailout money for the banks. Confused, the stupid taxpayer wants to double down on his original bet and the dealer shuffles the cards again for another hand of Three Card Monte.

On Monday or Tuesday of next week Obama and Geithner will announce the need for additional trillions to save the banks which begins a completely new game of Three Game Monte. The reason Obama MUST get his current stimulus plan passed is because if he can't then there's a snowball's chance in hell of him and Geithner saving the skins of the people and banks that got us into this crisis to begin with. The Obama stimulus plan is being used as a bone to make it appear he cares about average Americans while the real plan is to get trillions into the banks. Classic bait and switch. Make it appear Americans are getting something while doing a back room deal with the banks.

Only when the taxpayers get a belly full of this rigged game will they demand something else from these idiots but if past experience accounts [for] anything, the American taxpayer is just too damn stupid and lazy to do anything about it.

Taxpayers were plenty enough enlighted and motivated to throw out the bums that got us into this mess.

OR maybe
this is more apropo

IndyPaul - it's been 100 years of bad monetary and fiscal policy that has gotten us here, not sure which bums Indiana has been enlightened enough to throw out as it seems they keep going back to same two wells to get their belly full of excess debt, excess spending and silly government nonsense.

By some estimations, the United States economy has been on the decline since the 70s and the past couple of decades of "apparent prosperity" were largely the result of lower borrowing restrictions and increased debt based consumption.

Too much debt and spending is not going to be solved by more debt and more spending.

Out of the frying pan into the fire. Here comes the new boss, same as the old boss.

The democrats have won half the battle with the public so long as the media and bloggers continue to call it a stimulus bill. Call it what it is a pork barrel liberal spending bill to payoff their political friends.

Since Obama’s earnest drive to convince the nation to weaken its economic strength through redistribution as well as weaken its national defense, have confirmed the very threats to our Republic’s survival that the Constitution was designed to avert, it no longer is sustainable for the United States Supreme Court and Military Joint Chiefs to refrain from exercising WHAT IS THEIR ABSOLUTE CONSTITUTIONAL DUTY TO DEFEND THE NATION FROM UNLAWFUL USURPATION. The questions of Obama’s Kenyan birth and his father’s Kenyan/British citizenship (admitted on his own website) have been conflated by his sustained unwillingnes to supply his long form birth certificate now under seal, and compounded by his internet posting of a discredited “after-the-fact” short form ‘certificate’. In the absence of these issues being acknowledged and addessed, IT IS MANIFEST THAT OBAMA REMAINS INELIGIBLE TO BE PRESIDENT UNDER ARTICLE 2 OF THE UNITED STATES CONSTITUTION. Being a 14th Amendment “citizen” is not sufficient. A “President” MUST BE an Article 2 “natural born citizen” AS DEFINED BY THE FRAMERS’ INTENT.

Ted, Take a look at the discussion of the natural born issue in the December 30 article, talk about hypocrites:

To suggest that the joint cheifs have some constitutional duty to impose a coup based on a theory with no basis in law or fact is absolutely delusional. President Obam is the commander in chief. If there were such ability based on supposed weakening of the economy and defense, we would not have a democratic system, and Bush would have been ousted a couple of years ago.