CIB Offers Up Fake Budget Cuts: Will You Be Fooled? 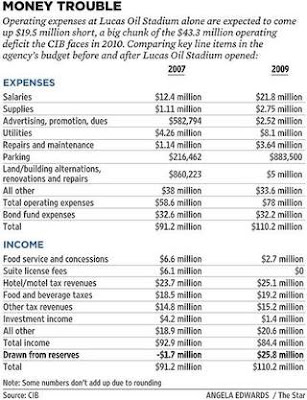 And it's worth noting that the focus of their cuts was to the very thing that had been touted as a benefit of these facilities - the multitude of low-level jobs that go along with operating them: hospitality, maintenance, support services.

What was NOT subject to trimming was their own compensation or anything to do with the Colts. Note that there were two renegotiations of leasing terms with the Colts - which were done to the Colt's benefit. Now that the horrendously bad terms of the current lease have put the city, and thus its taxpayers, in a bind, there's no consideration of any sort of a reciprocal consideration. Nope, the money flows one way only.

I'd like to wave good bye to Irsay, his drug addiction & his football thugs...

-Just why are the rich getting richer at the TAXpayer expense???

Gary, thank u for keeping this issue hot; please keep forcing it out there, let us finally do something about this merry band of thugs we call CIB, let us do exactly as indy4u states and once and for all wave goodbye to these gigantic sucks we call professional sports franchises;

I'm sure it doesn't hurt their chances when they have run-ins with police that the head of IMPD is on Irsay's payroll providing security to the team.

I thought Spears quit his Colts job when it was exposed in the media a couple of years ago!!

Didn't see a press release on that one, concerned taxpayer.

It's time to rally. Ogden's talking about putting something together at the State House. You guys can count on me to help.

I am thankful for you and Paul and your determination to help take back our city from these rich self-dealers.

Has anyone notified Ted of Hollywood Bar? Be nice to include him. This is what he wanted when he paid for that full page advertisement in the Indy Star which exposed the Sports Corporation, Indianapolis Downtown Inc., the mayor's office, and CIB for what they are.

I think the only way the Mayor can save himself at this point is to put you and Ogden on that board, give you full access to the CIB records, and let you two report to the People what's going on.

I'm not sure the mayor is politically astute enough to realize that there are many networked people within the Marion county GOP who want this crap to end.

These bad boys are going to cost our mayor his job unless he gets back to his roots (the people who got him elected) very quickly!

That will happen when hell freezes over, Melyssa. Those of us who actually worked for Ballard's election to bring about the change demanded by the public are persona non grata as far as he is concerned.