Just Blame Israel And The U.S. 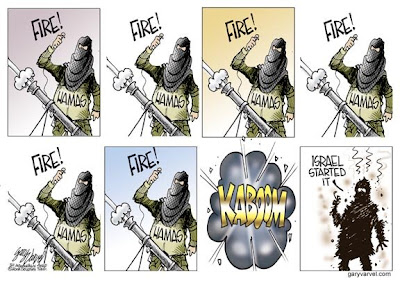 Slowly but surely the American Left is advancing the view that the real enemies of world peace are Israel and their American sponsor. I read with almost disbelief a story in today's Indianapolis Star wondering how someone could possibly be offended by an art display of an Israeli immigrant at the city's brand new airport presented as "a welcoming and tolerant place," which included the following narrative:

Sarfati says in the 2006 interview printed beside the photo. "Two days ago artillery shells fell in Gaza and killed 19 innocent people while they were asleep. It cannot get any more terrible than that."

Sarfati also calls the way American Jews celebrate Hanukkah "superficial and symbolic." Hanukkah "is not a big holiday in Israel," he says. "The reason it's so big in America is that Jews needed to have a holiday similar to Christmas so they could give gifts and do lights and not feel so different."

The airport removed the display after someone complained according to an airport spokesperson. The story's writer, Heather Gillers, turns the table and makes the removal of the insulting and offensive display as suggesting Indianapolis is an intolerant community. Gillers writes:

Airport spokeswoman Susan Sullivan confirmed it was the caption, a biographical narrative in which Sarfati shares his provocative thoughts on American Judaism and Israeli foreign policy. Sullivan would say only that the photo and text were removed one day after someone complained "to prevent the risk of anyone else possibly being offended."

She said officials are trying to determine whether it should stay down . . .

Sarfati, who moved back to Israel last year, could not be reached for comment. Wolin, who is Jewish, said provoking discussion is part of the goal of public art and called the airport's decision to take down the photograph of Sarfati a mistake.

"I think this is intolerant to silence one of the immigrants and what they have to say about the American immigrant experience. It's proving exactly what they're trying to rebut."

Last year, Indianapolis airport officials told local Christians they would just have to suck it up when they announced that special foot baths would be installed at the airport to accommodate the disproportionate number of Muslim taxi cab drivers servicing the airport. Now we're just intolerant bigots because some people are offended that Israel and the United States are being portrayed as the bad guys at that same airport.

The message of the art display is not surprising. Media reports are sympathetic to the people living in Gaza where Hamas terrorists launch missile attacks daily against Israelis. Yet, when Israel defends itself, it's naturally portrayed as the bad guy. At the same time, the media whitewashes reports on the recent Mumbai, India terrorist attacks. For some reason, the media didn't think you should know about the fact that the Muslim terrorists sexually assaulted and mutilated the sex organs of their foreign victims before shooting them to death.

Correct me if I'm wrong, but wasn't it Muslim extremists who forever changed air travel by hijacking and flying passenger-filled airplanes into the World Trade Center and the Pentagon because they wanted to destroy America and our western way of life? The last time I checked the U.S. and Israel are front-line leaders in the fight against the terrorist forces of Islamic extremists. Think about how much money our country has been forced to spend on air travel security, not to mention the intrusive security checks, because the people of one particular religious sect are hell-bent on bringing death and destruction to us. But you know, it's all our fault because the American Left says so. Their freedom of speech gives them that right, but I don't think they should be surprised that people object to their propagandizing in public-owned buildings.
Star editorial cartoonist Gary Varvel aptly depicts the current situation in Gaza in his cartoon above.
Posted by Gary R. Welsh at 4:46 PM

What's even more amazing to me is that the Muslims have all of the Middle East - vast territories of oil-rich land - the Jews have this one, itsy-bitsy, little, teeny-tiny slice of land - and the Muslim hatred for the Jew just will not tolerate even a speck of Jewish land anywhere near them.

However, I'm not so sure this is "our" fight. Why do we protect the Jewish Nation? What's in it for us, as a nation? Does Israel provide us with any thing of value, or are we only providing support to them because some bankers here in the USA have ties to Judaism?

Wolin is out of his gourd. Indiana is very accepting and tolerant, he just can't see it from his leftist plateau. For eight years we had a Jewish mayor. Our governor is Syrian (Mitch, yes). Every year an openly gay man, Jim Nabors, sings the state song at the 500. Indy has an active and gigantic gay community. Indy has more "mixed" marriages than almost any city in the US.

As for "public art", there's two big reasons not to have it:

1) It always ends up being leftist.

2) It's a criminally awful use of tax money - oh, sorry, Hoosiers, we can't pay for healthcare for some of you, we spent a million on public art.

Part Time, I believe the reason you can't recall the number of Israeli civilians killed by Muslim extremists is because those numbers are very small in comparison to numbers of Palestinians killed in these kind of actions by Israel. I believe this is because of greatly superior Israeli security and military power, the later of which, of course, is largely due to U.S. assistance.

I am not attempting to make a statement of right and wrong in pointing this out. This is an awful and intractable conflict, and one to which there are no easy answers. Name calling is the kind of thing that perpetuates the conflict. An article which I read today was helpful to my understanding of recent events in Israel: "Israel's Gigantic Blunder" http://www.progressive.org/mag/avnery010209.html

PTS, Israel to this day is responsible for every single scrap of Middle East intel we have. Carter didn't believe in foreign intelligence at all and Reagan was fixated on the Russians. We are years and years behind the curve when it comes to Middle Eastern politics, intelligence, etc.

Go to an anti-terrorism class or a class on terrorism history. It's either taught by an Israeli or it's taught from a lesson plan put together by an Israeli. True, they don't have a lot to offer us because they're the size of Rhode Island and their very existence is threatened on a daily basis in ways our nation will never understand. However, they have unique talents unmatched in the rest of the world and they've been sharing that talent with us...