Trump Dispatches Investigators To Hawaii To Look Into Obama's Origins

Whatever becomes of his presidential ambitions, one thing for sure is that Donald Trump is doing more to make the issue of Barack Hussein Obama's constitutional eligibility a central issue of his presidency than anyone else who has been smeared and tarnished for asking the basic questions of this mysterious man who came from nowhere to become the leader of the free world. Trump has now dispatched a team of investigators to the state of Hawaii to learn more about Obama's origins. CNN reports on Trump's quest for the truth and what could become the biggest fraud in American political history:

Self-proclaimed birther Donald Trump is now so doubtful of President Obama's birthplace that he's sent a team of his own investigators to Hawaii in hopes of getting to the bottom of the issue.


That's according to Trump himself, who, in an interview with NBC, warned his investigators just might uncover "one of the greatest cons in the history of politics and beyond."

"I have people that have been studying it and they cannot believe what they're finding," Trump said an interview that aired Thursday Morning.

Asked if he has assigned people specifically to search in Hawaii, Trump said, "Absolutely."

The business mogul, who in a new NBC News/Wall Street Journal Poll is tied for second place among potential presidential candidates, also suggested the president is involved in an ongoing cover-up over the matter.

"He spent $2 million in legal fees trying on to get away from this issue, and if it weren't an issue, why wouldn't he just solve it?" he said. "I wish he would because if he doesn't, it's one of the greatest scams in the history of politics and in the history, period. You are not allowed to be a president if you're not born in this country. Right now, I have real doubts."

Those of us who have searched for the truth of this matter have been totally pilloried by the mainstream media and people on the Left and Right who are either ignorant of what the constitution says about persons eligible to be president, or who simply don't want to know the truth. It would have seemed incomprehensible to me prior to the 2008 presidential election that a man about whom so little was known could spoon feed a fabricated biographical narrative ghostwritten by a reputed terrorist, photo-shopped family photos and a birth certificate of questionable origins and skip right into the White House while other candidates found every last rock of their personal lives turned over to tear down their images in the eyes of the American people.

I hope Trump's investigators spend some time interviewing Tim Adams, a former Democratic elections supervisor in Honolulu who contends there is no Hawaii birth certificate documenting Obama's birth in the state, although Adams still believes Obama is eligible to serve because his mother was an American citizen. Here's what Adams said during a recent BlogTalkRadio interview on the subject:

"I think people believe there's been some kind of cover-up. And I don't think it's some big nefarious conspiracy. I think it's politics as usual," Adams said March 31 on Reality Check Radio, an Internet program on BlogTalkRadio.


"Barack Obama's official autobiography was put out to the public for the public's consumption and we all know politicians – they have a public persona, it's created for consumption by the electorate – and I think that they've been caught fibbing, and it's embarrassing."

But Adams, who described himself as "pretty much a liberal" who backed Hillary Clinton in the campaign, thinks the president should produce a long-form birth certificate if he has one, even if it contains information that does not go along with the narrative proffered so far by Obama and his surrogates.


"I think as much trauma as all this has caused," Adams said, "I think if Barack Obama has lied about where he was born or if there's something about his birth that he doesn't want people to publicly know, if he would come out and simply say something like that, I think most people would go, 'Oh, OK,' and they would go on about their business 'cause they've got a thousand more important things to do." . . .

The radio hosts suggested that Janice Okubo, the public information officer for the state health department had previously vouched for the authenticity of the COLB, though in reality she has refused to do so. But Adams maintained the online scanned image is fraudulent.


Adams was asked, "So you're calling Janice Okubo a liar?"

"Yes," Adams responded, "if she's saying that that document that is sitting out there on the Internet is an actual document because we can prove it's not in about 30 seconds. Because it's altered."

"I happen to be a trained document researcher, by the way," Adams continued, "and have worked with the Hawaii Historical Association and have worked in the state archives. So I do know what a document is."


Adams says he even offered the current Democratic governor of the state, Neil Abercrombie, his personal assistance to help verify any long-form birth certificate if it were ever produced.

Adams insists the only thing contained in Hawaii records on Obama's birth  is "an archive notation." There is no Hawaiian long-form birth certificate for Obama he maintains. Hawaii law permits a parent to register a child's birth based on his or her residence in the state regardless of the birthplace of the child.  "The fact is, we've had one person all along who could simply end this, who supposedly has the document in his possession, and that's President Obama," said Adams. "He could end this. I really wish he would."

UPDATE: Just for fun, I'm showing a blatant example below of how Axelrod & Co. photoshopped family photos to use in his presidential campaign: 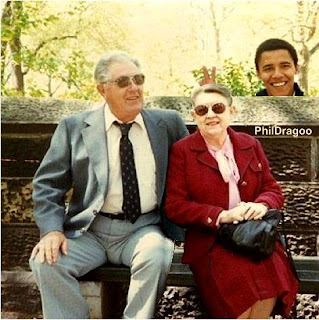 There are more examples of photoshopping here.
Posted by Gary R. Welsh at 11:22 AM

All I can say is, why would ANYONE spend over $2MILLION just to keep your birth certificate secret?
Tell me there's nothing on it that he doesn't want us to see.

It's too bad the Kenyan born dictator didn't just show us his Kenyan birth certificate a long time ago...the people might have let it slide had he just been honest about it from the beginning! LOL

I think it is unlikely he was born in Kenya. We know mom showed up to start classes at the University of Washington in Seattle with Barry in tow just a couple of weeks after his birth. It seems unlikely she and the father, whoever that was, lived together as husband and wife. It is simply a fact that she and Barack Obama, Sr. never lived together as husband and wife. She didn't move to Hawaii with Barry until after Barack, Sr. had left Hawaii for Harvard, where he married another white American woman. Even Barry's book acknowledges that only that wife, Ruth, was able to prove her relationship to his reputed father for purposes of claiming as an heir when he died.

How do we know that Trump sent investigators? It is not substantiated.