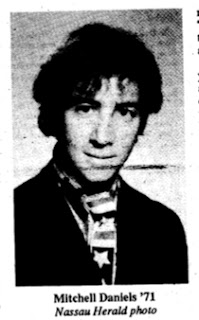 I've always believed that Mitch Daniels could never be nominated by the Republican Party for president because of the sordid details of his drug arrest while a student at Princeton. While such matters are worn like a badge of honor by Democrats, Republicans are generally less forgiving on such matters. When I took a closer look at the arrest a couple of years ago, I learned there was more to the arrest than what Hoosiers had generally been told by Daniels and the news media. An undercover police officer was able to observe marijuana, LSD and other illegal drugs, as well as prescription drugs, being dealt out of the dorm room Daniels shared at Princeton with his two roommates. While all three were initially charged with serious drug charges and Daniels was forced to spend two nights in jail while waiting for his father, a pharmaceutical executive, to come and bail him out of jail, the more serious drug charges were dropped in a plea deal where Daniels got off with a minor disorderly conduct charge. As I learned from my research of old archived newspaper stories on the arrest, the police officer who investigated the criminal activity was extremely disappointed in the plea deal offered to Daniels.

When Daniels ran for governor, the Indianapolis Star and the rest of the news media in Indiana pretty much glossed over the arrest and passed it off as a simple juvenile indiscretion of Daniels smoking pot while in college like most of the college-age students of his generation. That's how Daniels told the story and the media pretty much took him at his word. The facts are not quite as tame as Bill Clinton's "I smoked [pot], but didn't inhale" proclamation when he ran for president, or Barack Obama's candid admission of getting strung out on drugs from time to time when he was younger. "Pot had helped, and booze; maybe a little blow when you could afford it. Not smack, though,” he wrote in his book, "Dreams From My Father." The Politico's Ben Smith is taking a little bit more discerning look at Daniels' old arrest just as Daniels prepares to give an important keynote address at the Conservative Political Action Conference in Washington tonight:

Mitch Daniels is weighing a run for president 22 years after he glumly told his college newspaper, the Princetonian, that "any goal I might have had for competing for public office were shot."


Though Daniels is often knocked as a dull numbers guy, his past is actually among the most colorful of any Republican contender's, beginning with the surprisingly little-known fact that he was arrested and jailed in a drug sting operation that centered on his Princeton University dorm room.

According to campus newspaper reports supplied by the university, Daniels and two other students were swept up in a five-month joint investigation between New Jersey state police and local police that culminated in the May 14th, 1970 raid on Daniels' shared room at111 Cuyler Hall.

Daniels and the two other students were initially charged with possession of marijuana, LSD and prescription drugs without a prescription and with "maintaining a common nuisance by maintaining a place for the sale of narcotics."

A local detective testified that police had seized "enough marijuana to fill two size 12 shoe boxes and quantities of prescription drugs were found in the room," according to a dispatch in the Daily Princetonian, whose archives aren't available online for that year.

Daniels was never implicated in selling the drugs, and has never hidden the incident. During his 2004 run for governor, a former roommate told the Indianapolis Star that Daniels "had nothing to do" with selling drugs, saying "I was busted." The roommate went on to say he was no fan of then-President Bush and would have gladly offered unflattering information about a GOP candidate if he'd had it.

Prosecutors later dropped the stiffer charges against Daniels, and he pled guilty to a disorderly person charge based on his use of marijuana, paying a $350 dollar fine.

During his political campaigns, Daniels has discussed the arrest, and he held a security clearance during his time in the Bush and Reagan administrations; he has typically characterized it as a minor pot arrest, and typically doesn't mentioning the initial acid charge.

Even before President Obama made elective office safe for the admitted use of, even, hard drugs, Daniels took back his assessment that he was finished for elective office.

He told the Princetonian later in 1988, when he was vetting for appointment to Dan Quayle's vacated Senate seat, "I talked to some political people about it. I think you could make a forthright account and statement and take your chances."

"There's probably not a living Hoosier whose life has been scrutinized more thoroughly than mine," he told the Star in 2004. "We live with the consequences of our actions and that's a good thing."

Though Daniels reportedly walked reporters in great detail through his record in 2004, a Daniels aide didn't respond to an inquiry about the details last week.

The fact that Daniels' father was a pharmaceutical sales executive caused me to wonder if his father's sample bag hadn't provided him ready access to the prescription drugs that were observed being dealt out of his dorm room at Princeton. Adding to the irony of the old arrest is Daniels' later ascension to a role as one of the highest paid executives at Eli Lilly before he became governor of Indiana. Daniels was not exactly your typical rich brat attending an Ivy League school wearing his khakis, button-down oxford shirts and penny loafers to avoid the Vietnam War through a college deferment while extolling the virtues of fighting communism stateside. He was actually one of the long-haired hippies of his day who was active in the anti-Vietnam War movement prominent on many college campuses at the time and not adverse to dabbling in the hardcore drug scene. I suspect Daniels folks are wanting to get this information out early before he officially launches his campaign. Perhaps the airing of it now will inoculate him from the damning aspects of the account later when the campaign heats up. We'll see.
Posted by Gary R. Welsh at 8:08 PM

They keep saying he was forthright in 2004 about the arrest, but I never remember anything about the drug selling back then. In fact, I did not know about that, except through vague rumors, until you posted back last year when you went digging, Gary. How could have he been forthright then by only telling the Star and others he only smoked pot when he was in a room -- visited 8-9 times by an undercover agent -- where drugs were being sold, including pharmaceutical drugs as his father also happened to be in that industry? It seems hard to buy.

This is not my biggest problem with the governor -- his fiscal mismanagement, rampant nepotism/cronyism, and poorly-run state agencies are. But you're right, many Republicans won't care for the fact he sold drugs when they know more about it -- especially if he was lying to cover some of it up (which it looks like he has done).

This is what the Star says in "Behind Closed Doors" about Smith's story: "It didn't take a lot of digging, as Daniels has been upfront about the incident and discussed it with Indiana reporters in his 2004 run for governor. The drug charges were dropped after Daniels pleaded guilty to a disorderly person charge and paid a $350 fine."

As I pointed out before, the extent of what had transpired was never discussed by the Indiana news media and, particularly, the Star, which bent over backwards to misrepresent the events to the public. If the Star wants to destroy you, like it did with Eric Dickerson, it will take a decades-old arrest record involving a domestic dispute where the charges were dropped and make it a front-page headline story. Goldsmith's domestic problems never seemed to concern the Star. The Star and the news media in this town cover up so much of what goes on in this town. Hell, in this town you can get drunk, go run down and kill a guy and become a judge. The Star will dismiss it as a youthful indiscretion if the right people are whispering in the ears of the editor.