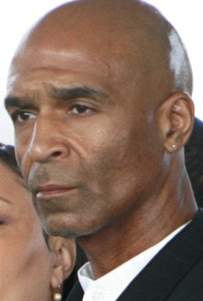 Sam Carson, the son of the late U.S. Rep. Julia Carson, threw a loop into the coronation of Melina Kennedy as the party's candidate for mayor this year when he announced on February 10, the same date he notes Barack Obama announced his candidacy for president back in 2007, that he would be a Democratic candidate for Indianapolis mayor. Lacking any party support, including his mother's successor and his nephew, U.S. Rep. Andre Carson, he will skip the party's slating and run directly against Kennedy in the May primary.

There's plenty of bad things one can say about his mother, but even she had the good judgment to know that her son was a bad seed. That's why she skipped over him and anointed Andre as her chosen successor before she died in 2007. Apparently during all of the ceremonies celebrating the life of his mother, Sam developed delusions of grandeur his mother decided weren't in the cards for him. He inherited her modest home in Fall Creek and immediately outraged his neighbors by erecting a tall wrought iron fence around the home with a gated entrance. Although he worked as an inspector for the city at the time, he claimed he didn't know he needed a permit to build a fence or obtain a zoning variance for a fence that violated height and setback requirements. The Ballard administration came to Carson's rescue and ordered the Board of Zoning Appeals to overlook Carson's missteps so he could keep his ostentatious fence that is completely in discord with the standards of the modest neighborhood in which he lives.

Carson further enraged local Democrats in 2008 when he cut a TV commercial endorsing the re-election of Gov. Mitch Daniels on his late mother's property. The most appalling aspect of it was the belief of the Daniels campaign that people would actually care who the unaccomplished bad seed would support for governor. In a sad attempt to cash in on his mother's name, Sam started up a nonprofit legacy foundation named after her last year. Not surprisingly, both Mayor Greg Ballard and Gov. Daniels showed up to help raise money to kick off Sam's foundation. Curiously, or perhaps not so, word of Carson's mayoral candidacy was broken by the lowest rated radio talk show host in the city, who is also a paid mouthpiece for Mayor Ballard's re-election campaign and who is thoroughly despised by the political machine built by Carson's late mother.

Marion County Democratic Chairman Ed Treacy was not amused by Carson's announcement. "The entry into the mayor’s race of the unemployed Sam Carson brings an interesting development — a candidate with neither the experience nor the capacity to address the three most pressing issues in Indianapolis — jobs, crime and education," Treacy observed. "Sam Carson has no experience in these areas and will bring nothing to the table in addressing them." As an elected Republican precinct committeeperson, I think it would be useful if the Republican leadership in Marion County devoted their attention to finding candidates who actually believe in Republican principles instead of governing like tax and spend Democrats as their mayor and council have for the past four years and meddling in Democratic primary affairs.
Posted by Gary R. Welsh at 9:01 AM

Gary, Do you think Sam Carson is a Republican plant? That's a very interesting angle.

He has a history of being used by Republicans.

Do you think the Republicans will give Sam some "Seed" money! ;)

Many people believe that the is a Republican plant. He will be nothing more than a blimp on the radar screen on primary day.

Sam Carson is a member of Julia Carson's family...thus all Democrats shall bow down and issue homage to him.

You show how little you know and how biased you are. Even his own nephew and other relatives are NOT supporting his candidacy for Mayor. They are supporting Melina. No need for anyone to bow down.