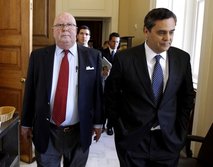 The Senate impeachment trial of U.S. District Judge G. Thomas Porteous of Louisiana, an appointee of former President Bill Clinton, marks one of those rare occasions when members of both parties set aside partisanship to do the right thing. Porteous, who was represented by well respected constitutional law professor Jonathan Turley in his trial, is only the eighth judge to be removed from the bench through the impeachment process in the country's history. The AP has a good run down of what took place:

The Senate on Wednesday convicted U.S. District Judge G. Thomas Porteous of Louisiana on four articles of impeachment, making him just the eighth federal judge in history to be removed by Congress.

They also approved a motion barring him from holding future federal office.

Porteous, who sat before senators in the well of the chamber as they voted separately on each count, issued a statement after the vote saying he disagreed but "must now accept that judgment."

"I am deeply saddened to be removed from office but I felt it was important not just to me but to the judiciary to take this fight to the Senate," said Porteous, who turns 64 next week. "While I still believe these allegations did not rise to the level of impeachable offenses as a constitutional matter, I understand how people of good faith could disagree."

The Senate voted unanimously to convict on the first article involving cash from attorneys, and with strong majorities on the other three.

Sen. Claire McCaskill, a Missouri Democrat who managed the case, said the bipartisan process worked as intended and "should be reassuring to every American."

"There are times this place is pretty dysfunctional," she said, "but ... I think the responsibility was handled just as the founders would have wanted us to handle it."

Many of the facts in the case weren't disputed. Porteous' lead attorney, Jonathan Turley, acknowledged that the judge made mistakes but argued that they were mostly personal failings that didn't meet the "high crimes and misdemeanor" standard for impeachment. Turley also argued that many of the practices — such as accepting favors and expensive meals — were common in the Louisiana legal community.

But House prosecutors said the evidence showed a decades-long pattern of corruption. They told senators that allowing Porteous to remain on the bench would erode public confidence in the courts and make a mockery of the federal judiciary.

After months of hearings, the Senate closed the chamber for more than two hours Tuesday night to deliberate on his fate. The Senate made its decision Wednesday in a solemn ceremonial vote in which senators sat at their desks and rose when called, saying "guilty" or "not guilty."

Porteous offered little reaction as the decision became clear, mostly looking down at papers before him where an attorney kept a tally of the votes.

In earlier hearings, two attorneys who once worked with Porteous had testified that they gave him thousands of dollars in cash, including about $2,000 stuffed in an envelope in 1999, just before Porteous decided a major civil case in their client's favor. They also said they paid for meals, trips and part of a bachelor party for one of Porteous' sons in Las Vegas, including a lap dance at a strip club.

Another witness, New Orleans bail bondsman Louis Marcotte, described a long-standing relationship in which Marcotte and his employees routinely took Porteous to lavish meals at French Quarter restaurants, repaired his automobiles, washed and filled his cars with gas, and took him on trips. In return, Porteous manipulated bond amounts for defendants to give Marcotte the highest fees possible, said Marcotte, who served 18 months in prison on related corruption charges.

The impeachment article involving the bondsman narrowly won the two-thirds majority required for conviction, with 27 senators voting "not guilty." Porteous' attorneys argued during trial that the alleged misdeeds occurred when he was a state judge and that Congress would be setting a dangerous precedent by convicting him on "pre-federal" conduct.

The final two articles — alleging that Porteous filed a fraudulent bankruptcy and lied to Congress during his judicial confirmation — drew just eight and six "not guilty" votes, respectively.

Porteous' behavior was uncovered in a 1999 FBI investigation that found widespread corruption in Louisiana's Jefferson Parish. The sting netted more than a dozen convictions, but Porteous was never charged with a crime, in part, authorities said, because statutes of limitations had expired.

The Justice Department referred a misconduct complaint to the courts. Porteous was suspended from the bench, and the Judicial Conference of the United States recommended that Congress consider impeachment.

House prosecutors laid out a damaging case against Porteous, a New Orleans native who was a state judge before winning appointment to the federal bench by President Bill Clinton in 1994. The prosecutors said gambling and drinking problems led him to begin accepting cash and other favors from attorneys and bail bondsmen with business before his court.

He also was accused of lying to Congress during his judicial confirmation and filing for bankruptcy under a false name.

I was curious how Porteous managed to file for bankruptcy using an alias. A Special Investigatory Report prepared for the 5th Circuit Court of Appeals described how he accumulated credit card debts in excess of his annual salary as a federal judge that he was unable to repay because of serious drinking and gambling problems. He sought advice from a bankruptcy attorney who suggested he file a Chapter 13 petition when efforts to work out the debts failed. Porteous feared the embarrassment from the filing so his bankruptcy attorney advised him to file a bankruptcy petition initially using a false name and then amending the complaint later to reflect his real name. Porteous embraced the idea and adopted the name, "Ortous, G.T" for purposes of the initial filing. About a month after he filed the initial petition his attorney amended the petition to reflect his real name and actual address. His attorney, Claude Lightfoot (no pun intended), tried to take the fall for "the stupid idea" of using the alias, but Porteous couldn't deny he had signed the original petition using the alias under penalties of perjury. Porteous also admitted he violated the terms of a bankruptcy order prohibiting him from incurring additional credit card debt after he filed his original petition, Nonetheless, he continued running up more credit card debts and taking out $31,000 in markers at local casinos in Louisiana and Mississippi. He compounded his problem by misrepresenting his debts to the bankruptcy trustee overseeing his case. That's in addition to the findings of cash and other favors he accepted while serving as a judge. The Special Investigatory Report details a lot of other misdeeds by Porteous. You can read the full report by clicking here.
Posted by Gary R. Welsh at 7:22 PM

It's as corrupt here, we just don't have any good prosecutors to deal with all of the corruption.

Slick Willie was disbarred in Arkansas for perjury!

He is the most loathsome president our country has EVER seen!