The New York Times has a good story this week about professional sports stadiums being built at a large expense to the public and being torn down before the debt is paid off. The old Giants' stadium is the lead- off example:

It’s the gift that keeps on taking. The old Giants Stadium, demolished to make way for New Meadowlands Stadium, still carries about $110 million in debt, or nearly $13 for every New Jersey resident, even though it is now a parking lot.

And there's this mention of our own former RCA Dome:

The finances of public authorities are often murky. To determine that the RCA Dome in Indianapolis, which was demolished in 2008, has $61 million in debt remaining and will not be paid off until 2021, one must sift through 700 pages of bond documents.

Below is a graph that compares how much the public pays for these stadiums. As you can see, Indianapolis' Lucas Oil Stadium ranks the highest in the nation for the amount of public funds used to finance its construction. 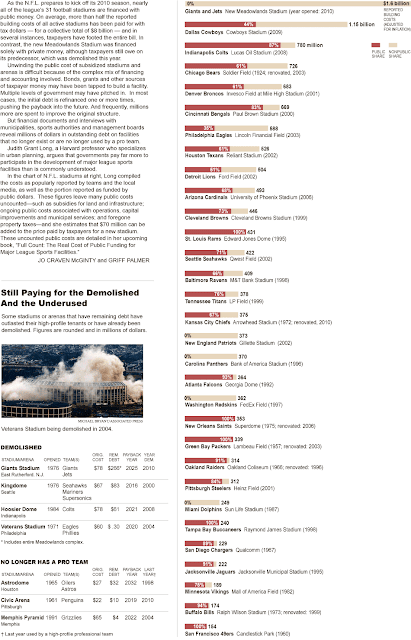 The same people who castigate Obama for public-option health care outright demand the government give them public-option Football.

Nice article and I liked the part about 700 pages of bond notes to find out the remaining debt on the old dome. It's too bad that our local politicians won't read this or they just don't care. In fact they will probably commission another study to show us that stadiums really help the community.

Yes, at the end, the only parties that benefit from all the debt local governments imposes on us for stadiums and such, are the banksters.

Quite interesting to see the Dallas line right above the one for LOS -- Their total cost is nearly double LOS yet taxpayers here STILL kicked in more dollars than Dallas taxpayers. And the Dallas population is more than double Indy's.

Even if the bill was fair, spartan, and genuinely revenue-neutral, our President and Congress have earned castigation in the polls from the audacious attitude of knowing "what's best for us" in shoving health "reform" down our throats.

But, I think this vaccuum cleaner sales job of medium markets having to have "professional" palaces to throw balls around is even worse.