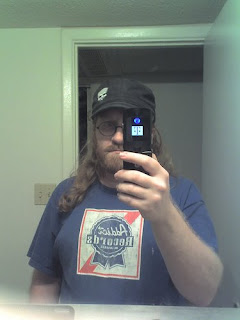 There is a repugnant, anonymous Indianapolis blogger who uses the handle StAllio to spread his screed on the Internet, which is essentially to attack anyone with pro-American, conservative views who is not in love with Barack Obama while warmly embracing the hate America crowd at every turn. His real name is Ben Berg. This is a photo of him, which he apparently used to troll the Internet in search of a wife, to show you the face behind his anonymous attacks.
Posted by Gary R. Welsh at 12:26 PM

This looks like ol' what's-his-name, the guy who makes lousy movies about GM CEOs, healthcare and 9/11, (that Ben probably likes).

This is completely unrelated, but who in the world can I contact about issues with the USPS when the USPS won't do anything about the complaints I file?

Our mail carrier changed a couple months ago. Our new carrier is so old he practically has one foot in the grave. He clearly can not do his job well -- we are constantly getting mail for other people (not at our address), and continually do not receive mail that we know was sent to us.

On top of that, last week he left one bank of mailboxes (we live in an apartment complex) completely unlocked -- the whole world had access to all of the mail received that day by 4 of us in our building.

I keep complaining, but the complaints appear to be falling on deaf ears. The USPS just doesn't seem to care.

This just shows you rednecks are just as likely to be liberal Democrats.

The really funny part is he's baffled by your brilliant discovery (his phrase). One that any amateur sleuth with access to google can discover in 30 seconds. Along with email, phone, address and the knowledge that Network Solutions thinks he owns one other domain name.

Aryg46254 - I guess that means you live in District 7. Call your congressman, Andre Carson.

(...waiting for laughter to subside)

Aryq46254 - write to the Postmaster for wherever you live - the Indianapolis Postmaster is Larry W. Diegel according to USPS.com

I had to do this once, I lived on the east side of Indy and the route I was on was a "training route" - and the trainees decided to just throw away all bulk mail. Some bulk mail is actually good. Took a year for me to notice what was going on and months for them to fix the problem.

I wonder if he knows he could have mirrored that photo of himself so people could read his tshirt a little easier!

Thanks for the tips, folks. If the issues with my carrier keep up, I'll write directly to the Postmaster.

Sorry for hijacking the comments :) I knew there were smart people here that would be able to point me in the right direction.

I've told you his name half a dozen times right here in the comments of your own blog. He's never been anonymous. The handle he uses is a DJ name; he's well-known (and quite popular) in the music scene and the art scene in Indianapolis.

You even sat on a blog panel with him. I have a photo of the two of you (along with your name plates) sitting right next to each other. If it was every a mystery who stAllio! is, it was only so to you.

And another fact for the record - Ben and his wife have been a couple for years. She also is a staple of the underground music scene in Indianapolis.

Oh really, Steph. Do you care to identify those dozen comments you've posted here identifying Berg? I've sat on panels with bloggers before where there were anonymous bloggers there. The blogger session with Bayh had a couple of such persons who even asked that they not be photographed.