Simons May Need To Sell Pacers 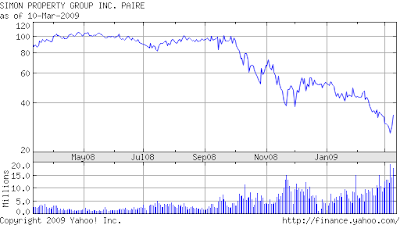 In case you haven't noticed, Simon Property Group's stock has been faring no better than other stocks as of late. According to the chart above, SPG's stock has fallen from a one-year high of $106.43 to as low as $24.27. It ended today's trading at $32.40. It would be easy enough to attribute the stock's decline to the depressed markets, but there are other indicators that investors may be shying away from SPG because of other concerns about the REIT's future prospects. Of particular concern is the enormous debt the company will see maturing in the near-term and the difficult challenges it will face in obtaining refinancing. Here's how one stock observer describes SPG's predicament and offers a recommendation for selling the stock short:

SPG is trading at a HUGE premium compared to peers. Based solely on peer valuation, I wouldn't be surprised if it drops to $10-15 in the next 3 months.


From 10-K:Chart of Debt Maturities (in thousands of US$)

Word on the street is that some layoffs are taking place at SPG's corporate offices in Indianapolis as they are at almost every business in town. One former Simon employee says he has spoken to several high-level SPG employees who have been prodded into taking early retirement.
On another note, the IBJ's Anthony Schoettle makes an excellent observation today about a seismic shift underway in the NBA and his suggestion that the Simons' woes with the Pacers is just the tip of the iceberg. He blogs today:

The signs are definitely there—and they spread way beyond Indianapolis. Twenty seven of the league’s 30 teams either plan to freeze of lower ticket prices next season. We’re not talking about the dregs of the league here. Among the teams seriously considering freezing or dropping ticket prices are Boston, Cleveland, San Antonio and Chicago. And Yes, the Pacers. Attendance and sponsorship is down league-wide. Several teams are considering 10 percent to 15 percent across-the-board budget cuts.

Since the players’ salary cap is figured on league revenue, it’s only a matter of time before the cap comes down. It’s probably time for NBA owners to consider a harder cap. There’s only one thing the players’ union fears more than that. Contraction. It’s laughable to think there are other markets waiting with open arms and sweeter deals for beleaguered teams. We all see how that is working out in Oklahoma.

Sooner or later, one city somewhere will cease the massive give-aways to its NBA team—not because they want to, but simply because economically, they have to. And then the dominoes will begin to fall—at a torrid pace.

Will it be New Orleans? Oklahoma? Gasp, Indianapolis? Never say never. Especially in this climate. And when the players’ union realizes this reality, they should be willing to talk turkey with owners. And owners should be willing to get serious about revenue sharing and a sustainable business model.

Even when the economy rebounds, the golden age of NBA players’ salary will be over. We’re headed toward a time when a professional athlete can make a good living—a very good living. But the days of mad money, the days of NBA players knocking down $15 million a year or more—will soon be over.

Think I’m crazy? We won’t have to wait long to find out. At the outset of this season, all we heard about was the wild 2010 free agency frenzy about to unfold. The storyline was that teams will be fighting over the likes of LeBron James, Amare Stoudemire, Chris Bosh and a few other prized players due to hit the free agency market. Teams were clearing salary cap space to prepare. Heck, I even thought Larry Bird might take that opportunity to upgrade the Pacers. Word out of New York was that Knicks General Manager Donnie Walsh (of previous Pacers fame) would offer LeBron the league’s largest contract. And maybe, just maybe, in New York they could actually afford that kind of deal. But at what cost to the rest of the league. At what cost to a team like the Indiana Pacers. Ironic to think, a loyal guy like Donnie Walsh could stick the last dagger in his former team.

Yes, concessions from the players' union is in order. The Simons should be joining with other NBA team owners and applying pressure on that end instead of making demands from their host cities to cough up more public dollars to support their enterprises at a time those governmental bodies and their taxpayers are already hard-pressed financially in this rapidly deteriorating economy.
And what if the Simons decide to sell the Pacers? A provision in the Pacers lease agreement for Conseco Fieldhouse gives the CIB a first right of refusal to acquire the Pacers. Obviously, the cash-strapped CIB is in no position to exercise that option. The lease agreement also provides a number of outs for the Pacers if the team's revenues are inadequate. The problem, though, is the lack of audited financial statements available to the public to allow an appropriate assessment of the team's true financial picture.
Posted by Gary R. Welsh at 7:38 PM

Why should the players negotiate away money collectively? Can't the owners just, you know, stop offering ridiculous contracts? The cap as a tool to keep teams competitive is wise but the cap as a tool to keep owners sane is dumb. If they need a cap that bad how come they've done just fine without it in any of their other businesses where they were also competing for talent?