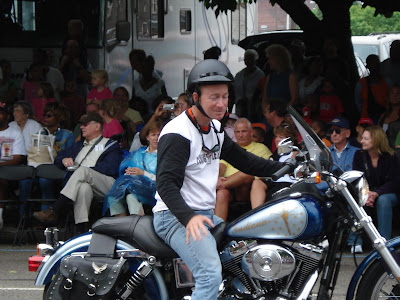 Just as it's been throughout this entire legislative session, the only talks concerning a bailout of the CIB to support the sports palaces built for the Indiana Pacers and Indianapolis Colts are taking place behind closed doors. The Star reports that Gov. Mitch Daniels had a private meeting with Indiana Pacers' co-owner Herb Simon. "On Wednesday, Herb Simon, co-owner of the Pacers, met with Gov. Mitch Daniels, though details of what they discussed were not available," the Star reports. "Sen. Luke Kenley, the Noblesville Republican who is working with Rep. Bill Crawford, D-Indianapolis, on the issue, said lawmakers would meet again next week with 'all of the appropriate parties.'" "It's probably going to be behind closed doors to get a feel about where we could go," he said. In case you didn't understand that, the taxpaying public is not one of the "appropriate parties" for these "behind closed doors" meetings.
Even though the Pacers are demanding that the CIB start paying $15 million a year to cover the costs of Conseco Fieldhouse or they'll have to consider moving to another city, their paid lobbyist says these talks don't concern them. "Greg Schenkel, vice president of sports and entertainment for the Pacers, said the team is 'not engaged in any active discussions (with lawmakers)," the Star reports. "We've been asked questions about our situation. This is not about the Pacers. It's about the CIB." Sure, Greg. The guv and Herb were just meeting to compare their favorite style of chaps over martinis. Gotcha. The Star added, "Colts owner Jim Irsay was unavailable for comment." Is someone hiding the pills?
Gov. Mitch Daniels likes playing the "I'm just an average Joe" role up and down this state. The Governor and our legislative leaders have accepted a lot of campaign contributions from the Simons and Irsays. Apparently, they don't think it's asking too much to ask an average guy to pay more for a beer at the Lockerbie Pub, dinner at Mass Avenue Pub or an Eagles concert at Conseco Fieldhouse so the billionaire Simons and Irsays can keep more of our money. Daniels does, however, feel strongly about paying unemployment benefits to record numbers of unemployed Hoosiers. "The answer cannot solely be to ramp up taxes to meet Rolls-Royce benefits," Daniels said recently, referring to the average weekly benefits of $390 an unemployed person in Indiana receives. Of course, that's before the unemployed worker gets socked with ATM fees that he's forced to pay to get his benefits so some campaign contributor gets a nice payoff for installing a flawed statewide computer system to process unemployment benefits. If $390 a week is a Rolls-Royce benefit for a guy who can't find work, what does that make the hundreds of millions in direct subsidies the average joe is paying to the government to support the billionaire Simons and Irsays?
House Speaker for Life Pat Bauer thinks he's got a bright idea. He wants to make the CIB a regional authority instead of Marion County only since the incompetent, unelected, self-dealing insiders who run the current CIB have done such a bad job with its financial affairs. "I think we begin with wondering if that is the structure that should be in charge of that whole operation," Bauer told WTHR. "Maybe there should be a regional structure since other counties participating giving their tax to this thing," said Bauer. Yeah, the surrounding counties got suckered into paying for Lucas Oil Stadium. Why don't we sucker them into paying for Conseco Fieldhouse, the convention center, Victory Field and every other public improvement scheme these blood suckers can conjure up to dig deeper into your wallet.
Posted by Gary R. Welsh at 4:56 PM

I sure hope that Lafayette isn't part of the proposed "region."

Thanks for your service to taxpayers, Gary. You've earned my respect.

That 'economic benefit' gets dimmer all the time, doesn't it?

We're headed towards being the poorest bunch of taxpayers in the country, but thanks to our politicians looking out for us we'll have more self esteem than we'll know what to do with.

Hey, the more the merrier, Diana.