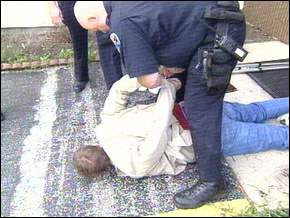 When it comes to wackiness, the Roseland town council in northern Indiana has just about every council in America beaten out. The town marshal was attempting to remove a council member from last night's council meeting when a scuffle ensued, leaving the town council member in a pair of handcuffs and a trip to the local medical center to treat a wound to his head. The South Bend Tribune writes:

He’d just been asked to leave after a dispute with council President Charley Shields. Town Marshal Jack Tiller escorted him to the door. Then you could hear a noise, and as folks looked back, they saw Tiller wrestling with Snyder on the ground in the doorway.

Council Vice President Ted Penn said he had a clear view of what happened. He said Snyder elbowed Tiller, which led Tiller to tackle and handcuff him.

A Roseland officer took Snyder to Saint Joseph Regional Medical Center first. The back of his head was bloodied.

UPDATE: Check out exstensive video footage of the entire incident at WNDU. It does appear Tiller used excessive force in dealing with Snyder. The council's president, Charley Shields, comes off looking just as bad as Snyder in the way he conducted himself during the events leading up to Snyder's arrest.

Roseland does not even have their own zip code for mail delivery but
generates all kinds of bad publicity. It is the motel section just northwest of Notre Dame campus, with a population of
approx. 400. These kind of incidents have been going on for 3 or 4 years there. He and his current wife at one time were two thirds of the town council for awhile. I think that the town is now near bankruptcy due to the attorney fees accruing in defending various litigation. The police officers are now paid minimum wage because the town budget has so little money available. He also has a back child
support case from an ex-wife which
also lands him in jail and the media several times a year.

That Marshal is a BRUTE! What a brave man to repeatedly strike the man that he is sitting on. What a cow, not like the guy could move. Hope the State POlice take his badge and make the world safe for us all.

WNDU caught it all on tape. You can see Tiller sitting on Snyders back repeatedly hitting him in the head. What's worse is that WNDU just reported that the proscutor is obtaining police reports about the incident so he can charge Snyder. Something must be done about this incident.

And yes. Roseland cops are now making $6/hour and are owed a lot of back pay.

The financial situation in Roseland is the result of the idiotic way the Snyders governed the town when they held the majority.

Snyder refuses to pay his back child support (over $90,000) while using his current wife to gift his income to and driving a Jag. He's a real sweetheart.

Snyder also (allegedly) caused serious harm to another council member when he and his father (allegedly) beat the man down in their town hall.

Both Snyders are well known for provoking most of the trouble they find.

That bad cop has to go.

That video was horrifying. I wish the councilman had been armed, and that he would have stopped the threat that was attacking him. He would have been perfectly justified in taking the life of that officer.

If police are acting unlawfully, citizens have the right (and duty) to defend themselves. Matt Faber learned that lesson with his life.

Yeah, moving from the impact of the blows to his head by a 250 pound cop...now that's resisting.

What surprises me more than anything is the lack of decorum. That's one of the reasons for following Robert's Rules of Order... so you don't have this kind of fight breaking out.

The fight that did insue, regardless of the genesis... the police officer definitely used excessive force. That much is obvious on review.

It really looked like something out of a trailer park HOA, than a governmental body.

I agree, Marti. The council president recognized Snyder, didn't like what he had to say so he unprofessionally cut him off, leading Snyder to call him a senile fart and then the president calling him a fu---- something or another. The president's mishandling of it created the situation, then he demanded the police remove Snyder. I didn't think he had a justification to forcefully remove him from the meeting. The smartest thing the president said was "maybe I should remove myself from the meeting" after he called Snyder the f---ing whatevere. It also appeared to me the police office gave Snyder a big shove just as they entered the lobby, which seemed to contradict the other council member's claim that Snyder elbowed the guy. Snyder had his hands full with the tripod and camera in one hand and the books and files in the other hand. A complete embarrassment all around on all sides.

I wonder is this Council President is related to, or has taken tips from Monroe Gray...they use some of the same words.

Monroe taught him well, Ernie.
With conduct like that, it appears that Indiana is the training ground for council presidents who like to abuse their authority!

Anon 1232, You need to learn a little thing called fact before you start spouting off about IPD Officer Matt Faber. The fact is Officer Faber was shot in the back and never even drew his gun out of his holster. Unless you are Fat Freddy Sanders the Cop Killer, you don't know what took place in that house prior to Faber being shot. Dead men can't speak. Since when is shooting anyone in the back self defense?

Day five, DVORAK, St Joseph County Prosecutor has done nothing. Tiller is still walking around with a gun. Isn't hard to believe?

Both of the Snyder's have a big mouth and have run the town of Roseland into the ground. David has not even paid his child support. Why do we let him even hold office? The officer was just reacting to a comment David made on his way out. David Snyder got what he deserved that night after all of the things he'd dished out over the years.