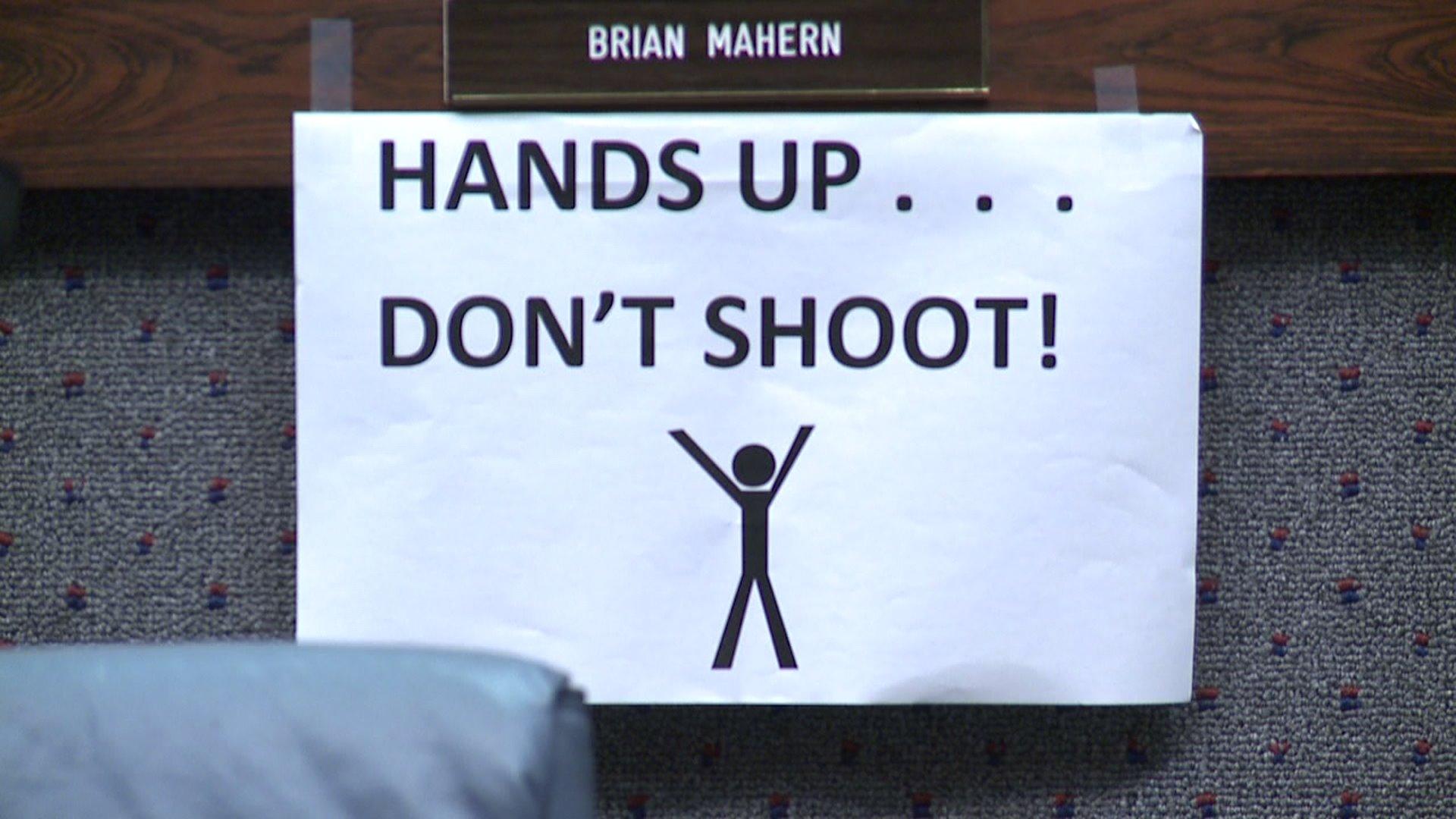 Several Indianapolis City-County Council members irritated Indianapolis police officers when they displayed at their desks signs which read, "Hands Up . . . Don't Shoot," at last Monday's council meeting in response to the recent police action shooting of an 18-year old black man by a white Ferguson, Missouri police officer. A number of IMPD officers were particularly sensitive to the council members' actions in light of the fact that a remembrance on the occasion of the tenth anniversary of the death of Officer Jake Laird, who was killed in the line of duty, was taking place at that very council meeting. The actions of an IMPD public information officer in helping defend one of the council members, however, has called into question his actions.

Sgt. Kendale Adams is often the face of IMPD as one of its public information officers. Many police officers were taken aback when Adams used his IMPD Media Relations e-mail account to allow Councilor Leroy Robinson (D), one of the council members displaying the "Hands Up . . .Don't Shoot" sign at Monday night's meeting, to send a department-wide e-mail defending his actions. Robinson, along with four other Democratic council members, Monroe Gray, Brian Mahern, Vop Osili and Joe Simpson, displayed the signs at their council desks during the meeting. In the department-wide e-mail, Councilor Robinson was allowed to send the following message after discussing the issue with IMPD Chief Rick Hite and several police officers:


To the men and women of the entire Public Safety community and their families and friends,

In speaking with IMPD Police Chief Richard Hite and several other police officers, I wanted to issue a brief statement regarding the perceived notion that my actions Monday night, along with the actions of a few other fellow councillors, intentionally orchestrated a plan to disrespect the IMPD Public Safety family.

There are many fine men and women of our Department who know me well and very personally, and are fully aware, that this is the furthest from the truth. I have always and will continue to be in full support of their dedication, commitment, and sacrifice to keep our city healthy and safe.

I was fully endorsed by the Fraternal Order of Police during my campaign and as a member of the Public Safety Committee, I fully and equally support their membership and their efforts.

There are many issues facing our city and the need to work with our Public Safety family to strengthen our community and build a high quality police and community relationship is a priority of mine and my fellow councillors.

In the near future, we look forward to working closely with our Public Safety leadership team and focusing our complete and undivided attention on the 2015 budget, in a effort to improve the quality of life for all our citizens.

A number of police officers didn't shy away from sending reply e-mails to Robinson's statement to voice their disappointment in his actions. One officer said the "hands up, don't shoot" sign displayed by Robinson had "the Ferguson, MO anti-police sentiments embedded in it and that is what Robinson displayed: anti-police sentiments." "Just embarrassing and disrespectful on all levels," wrote another officer. "It was a classless move on your part and others who had those signs," said another officer. "You say you support IMPD, I see no apology in your statement or no explanation . . . just a lot of ask others about me." Other sentiments expressed by officers included the following:
After reading the officers' reactions to his statement, Robinson sent another e-mail, once again, defending his actions, in which he wrote:


Thank you for sharing your comments, questions and concerns.

I do appreciate the fact that you elaborated on another police officer's concerns.

With that said, I stand by my statement and I would never allow you or anyone else to define me, my role as a councilor, my full support for the entire law enforcement community, or my over 30-years working in our entire community, based on a sign that hung in front of my name-plate at a public meeting.

Why did he not sign it Arrogant Black man!

He thinks he is better than the low life officers. By the way Kendale Adams sucks. Terrible speaker and has the job for only 1 reason. He is a brown noser.

Click on this: I remember when Democrats called for a police officer to be fired because someone saw an Impeach Obama sticker inside his police car.

So now Democrats think they'll not only orchestrate an affront to the family of a police officer that was killed in the line of duty at a Council meeting in which honoring that officer was on the agenda, but they want to insult his memory and inject ignorant mob-mentality into our own city. The Council Democrats are beyond disgraceful....what they did was sick.

I am also sure that The Most Ignorant and Disgraceful Monroe Gray put them up to that action.

I hope the voters of Indianapolis show up at the next Council meeting to voice their outrage at those ignorant hypocrites like we did before when Monroe Gray was doing a number of disgraceful things! Click here for A Minute With Monroe: I remember when we packed the Council Chambers and Monroe made angry voters stand in extreme heat....

After reading the city Code of Ethics I do not understand why Adnavce Indiana is not treating thie posting of the signs as a serious violation of the own Ethics Code. And two of the 5 are even on the Ethics Committee!

The city's ethics code is toothless and never enforced. It's just there for show and nothing more.

I think the actions of Monroe Gray and his cohorts needs another Council revolt like we've done before when those ignorant Democrats acted so arrogant...

Click here for the montage to remind The Democrats of our outrage and our response at the public meetings!