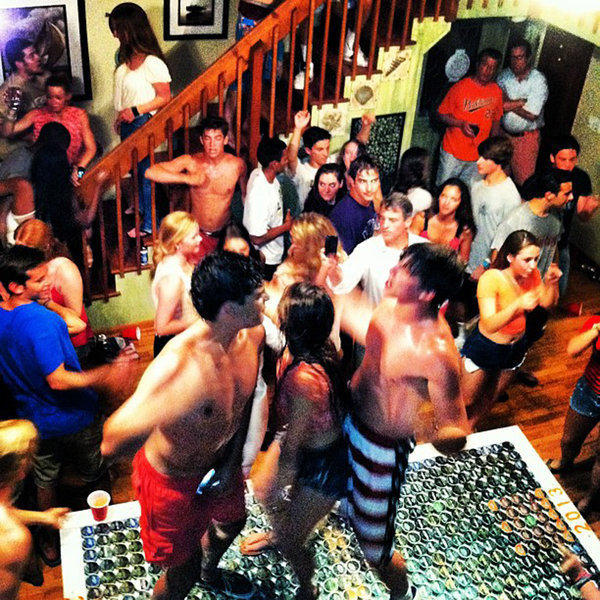 Maryland Attorney General Doug Gansler (D), who is running to become the state's next governor, is having to explain how someone captured him in the middle of a rowdy underage drinking party at a house on a Delaware beach this past June. According to the Baltimore Sun, classmates at the prestigious Landon School in Bethesda threw what they dubbed an "eviction party" at a South Bethany rental home where plenty of alcohol was consumed. Gansler, an outspoken advocate against teenage drinking, told reporters that he was simply stopping by to check on his son when someone captured a photo of him holding out a cell phone taking a picture of three teens partially unclothed dancing on a table. Gansler claims he was unaware that alcohol was being consumed. Even if he realized they were drinking, Gansler said it wasn't his responsibility to break up the party as a parent since it wasn't his home and was taking place outside of his state. "Assume for purposes of discussion that there was widespread drinking at this party," Gansler said. "How is that relevant to me? … The question is, do I have any moral authority over other people's children at beach week in another state? I say no." Gansler insists that his son wasn't among those who were drinking.

Apparently, there were parents present for the party acting as chaperones to ensure that the party didn't get too far out of control, who nonetheless permitted beer and wine but not hard alcohol to be consumed by the underage teens. Incredibly, with the parents chaperoning the party, the house sustained about $50,000 in damages from moisture damage to the house's hardwood floors and dents on the bar and a pool table made from high heels. According to the Sun, social media photos posted on the Internet depicted a clear liquid being poured onto dancers from a second floor balcony above the teens dancing on the bar and table. Parents of the teens claim that someone broke into the house after they cleaned up and left and caused the damage. Yeah right. No arrests were made. Although the drinking age in Delaware and Maryland is 21, parents in both states are permitted to serve alcohol to their children at home. No wonder kids are so screwed up today. The parents are just as irresponsible as the kids. And to think these are people who supposedly come from the upper crust of society.

Darn, I wish I was there.

I think the best thing we could do is change the drinking age to 18 and allow parents to serve alcohol in their homes to their children under that age. The problem is we don't teach the responsible use of alcohol. We instead try to impose prohibition which doesn't work for young men and women anymore than it did for older adults.

It's a make-work project for pigs, Paul.