The Boston Globe reports that one suspect in the Boston Marathon bombing is in police custody and police are in hot pursuit of the second suspect in the Watertown neighborhood. Other news reports say the suspect taken into custody was shot and later died. The latest development followed an armed robbery of a 7-Eleven in Cambridge, followed by a carjacking and killing of an MIT police officer by the armed robbers. The first home video above captures the police shootout in the Watertown neighborhood during which one of the suspects was taken into custody after the stolen car was stopped by police. The second video shot by 7 News Live appears to show the suspect who was shot and killed during the shootout. The first suspect was reportedly armed with explosives, which police bomb squads later detonated according to news reports. The explosive has been described as a hand grenade. There are also reports that a pressure cooker style bomb like that believed to be used in Monday's bombings was recovered near the scene where the first suspect was shot and killed. News feed reports indicate that police are conducting a house by house search for the second suspect. During the pursuit of the second suspect, a transit officer has been shot and is reported to be in serious condition. 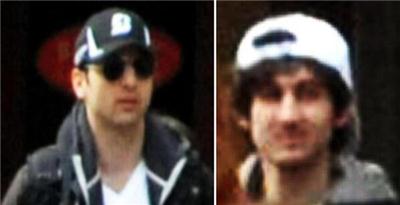 UPDATE: This story is unfolding, or unraveling as the case may be, almost like a badly-scripted Hollywood drama. After first awakening early this morning to bring you the initial surreal live police chase and capture of one of the persons suspected in the Boston Marathon shootings, I went to bed for a few hours only to awaken to learn that the two men suspected of the bombings were two recent immigrants from Russia. They are identified as brothers from Chechnya who have been living in the U.S. as lawful permanent residents for just one year. The surviving brother, identified as the man on the right, is being identified as 19-year old Dzhokhar Tsaraev and is still on the run. His 26-year old brother, Tamaran Tsaraev, is identified as the man in the first video supposedly taken into police custody after a police shootout who we're told later died. The only problem with that is that the man shown in the video has a hairline that looks more like the man on the right. The guy on the left has hair that is cropped much closer than the man on the right, whose hair length is much longer and is more similar to the man shown lying on the ground in the video being taken into custody.

I thought about it awhile after I posted the first video. Police were describing this scene of this wild chase in a stolen Mercedes Benz the suspects had hijacked where the suspects are said to be tossing explosives from the car before engaging in a shootout where perhaps as many as 100 rounds of shots were fired. Yet a roving cameraman is allowed to walk right up to the suspect lying on the ground before everyone is told to retreat for fear of more explosives. Police then supposedly bring in bomb squads to detonate the remaining explosives, including a pressure cooker style bomb that we're told was used in Monday's bombings. The other suspect is somehow able to flee the scene where at least 100 cops, including local, state and federal agents are in hot pursuit, while the other brother who is shown laying on the ground with his hands lifted slightly off the ground supposedly dies from gunshot and/or blast injuries.

I'm looking at live Twitter feeds where a women living next door to the suspects' apartment in Cambridge says, "I've never seen that guy." Another guy is talking to reporters telling them that he knows both of them well, describes one as a boxer and one as a wrestler. He was particularly good friends with the younger brother. He says he went to the same high school with them and hung out with them all the time. Shocked to learn they had anything to do with the bombing. He says they lived with their parents and have been in the U.S. for a number of years. Something told me when the feds identified these two suspects yesterday evening, neither would be taken alive. Alex Jones is going to have a field day with this bizarre tale. Here's Jones' first take earlier this morning before he learned that these two Russian men had been identified by authorities.
Watching Fox News live as hundreds of police have surrounded an apartment building with guns drawn. There have been several explosion sounds. Fox nows says to scratch the earlier report that the men have only been in the U.S. for a year. Now saying they've been hear at least since 2003. Why do I feel like I'm watching an old episode of "24"? Fox now reporting that the two men attended the same high school as Matt Damon and Ben Affleck. Two suspects have been taken into custody at this apartment building, neither of whom is the younger brother. 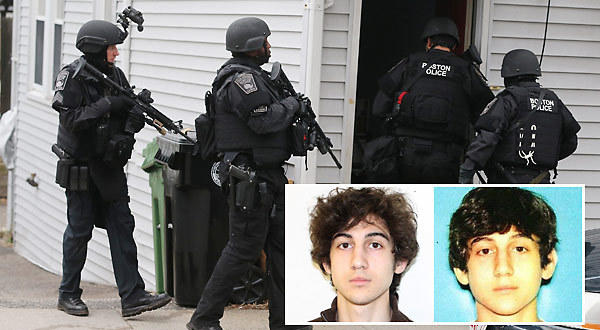 I bet Tschokar is also dead. The Boston Bombing certainly shows how unreliable are bomb snifting dogs, and for that matter, the federal Homeland Security agency.

Dzhokhar, correct spelling I think. is, most likely, dead.