A Salute To Chris Kennedy

It isn't often that I've been in a position to complement a member of the Kennedy family, but this is a huge exception. Chris Kennedy, the son of Robert Kennedy, gave an impassioned speech to the Board of Trustees of the University of Illinois of which he chairs against granting professor emeritus status to best pal of, and ghost book writer for, President Barack Hussein Obama. The Board of Trustees unanimously voted down emeritus status for Bill Ayers after Kennedy's persuasive speech. The Chicago Tribune's Jodi Cohen describes the highly emotional scene:

The vote, at a U. of I. board meeting in Urbana, was unanimous and came after a passionate speech by board chair Christopher Kennedy, who invoked the 1968 assassination of his father, Sen. Robert F. Kennedy, in saying that he was voting his conscience.
The other trustees, without comment, also voted against the appointment.

Ayers, the Vietnam War-era radical, had been an education faculty member at UIC since 1987. He retired effective Aug. 31 and then sought the emeritus faculty status, a largely honorific title that includes some benefits such as library privileges.

A co-founder of the Weather Underground anti-war group, Ayers was frequently in the media spotlight and, as such, was one of the university's best-known faculty members.

While trustees regularly vote on emeritus appointments, they rarely comment about them.

But in an emotional statement, Kennedy discussed his reasons for voting against Ayers' request.

"I am guided by my conscience and one which has been formed by a series of experiences, many of which have been shared with the people of our country and mark each of us in a profound way," Kennedy said.

He said he could not confer the title "to a man whose body of work includes a book dedicated in part to the man who murdered my father."

Kennedy was referring to a 1974 book co-authored by Ayers, "Prairie Fire," which was dedicated to a long list of people including Robert Kennedy assassin Sirhan Sirhan and "all political prisoners in the U.S."

Ayers became a controversial figure in Barack Obama's presidential campaign because they worked on a school-reform initiative together, leading opponents to say Obama was linked to a "terrorist." UIC was forced to release more than 1,000 files detailing the activities of that group. The university also faced questions in 2001 after Ayers wrote in his memoir about helping with the non-fatal bombings of government buildings.

According to the UIC faculty handbook, the granting of emeritus status is "based on merit" and is "an extraordinary title that is given for extraordinary service."

Kennedy said he hoped faculty, staff and Illinois residents "understand my motives and my reasoning" and concluded: "How could I do anything else?"

Ayers could not be reached for comment, and UIC School of Education Dean Vicki Chou did not return a call from the Tribune. She told the Tribune last month that Ayers has "been really a very good colleague here" and "the good far outweighs any negative press." 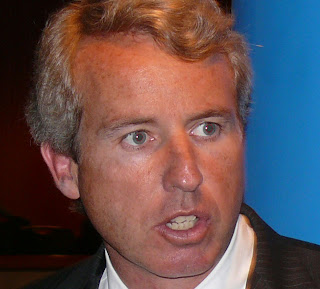 It absolutely sickens me that the President of the United States and Commander In Chief of our armed services has chosen to so closely align himself with a man like Ayers who considers the assassin of Robert Kennedy a political prisoner. When I used to work for the Illinois legislature, we had a Republican legislator who relentlessly offered up resolutions to denounce the University of Illinois for giving a professorship to such a despicable terrorist like Ayers. His presence at the University of Illinois permanently maligned my view of the school as an institution of higher learning. Thank God the Board of Trustees was more sensible than the university's administration has been these past 25 years in allowing the terrorist Ayers to teach at the school.
Posted by Gary R. Welsh at 11:47 PM

I don't ever condone bombings, lethal or otherwise. And I certainly don't condone assassination.

But there is a sense that we are judging what happened in the '60's through today's experiences and values.

It strikes me that the left of that era viewed the government much in the same way that the right does today. Again, no justification for the more extreme acts.

And what government buildings has the right been bombing?

Ummn... you didn't really ask that question did you?!?

The greatest act of domestic terrorism was the Oklahoma City bombing.

And there's a lengthy list of murders, assaults, bombings and arson attacks listed under "anti-abortion violence" under wikipedia.

Those are the things that come to the top of my head without thinking too hard. I'm sure there are others.

The OKC Murrah building bombing was not done by anyone that was a part of the far right. The government covered up the ties McVeigh and his co-conpirator, Terry Nichols had to al Quaeda. Circumstantial evidence of these links have been included in a House Internation Relations Committee report from a few years ago:

In his report The Oklahoma City Bombing: Was There A Foreign Connection? International Relations Committee chairman Dana Rohrabacher (R - California), presents evidence suggesting that Timothy McVeigh and Terry Nichols may have been assisted in the bombing of the Alfred P. Murrah Federal Building by "Middle Easterners" and "a German national living at an extremist compound in eastern Oklahoma."

Rohrabacher's committee presents extensive, "yet in some cases circumstantial," evidence establishing a relationship between Terry Nichols and Ramzi Yousef, the al-Qaeda terrorist convicted of carrying out the 1993 World Trade Center bombing. "For example, of all the cities in the world, convicted terrorist Ramzi Yousef and Terry Nichols were in Cebu City in the Philippines at the same time three months before the Oklahoma City bombing." The report continues to trace the Nichols' suspicious activities and relationships in the Philippines in the years and days leading up to the Oklahoma City bombing.

As the report points out, both the Oklahoma City and the 1993 World Trade Center bombings followed similar patterns, "a rental truck loaded with ammonium-based explosives, using similar detonation devices, based on the strategy of driving a vehicle into or near a target."

Rohrabacher also finds fault with the Justice Department for both its failures in the initial investigation of the Oklahoma City bombing and for what the committee call its current "lack of willingness" to examine the many question raised in the committee's report."

Joe Stack was a lone nut; not part of any right wing organized terrorist group.

But the fact that you would even ask the question "What government buildings has the right bombed" illustrates the degree to which we all minimize/don't see/rationalize political violence that coincides with our own views.

At the same time, we are quick to call the other side a terrorist. One man's freedom fighter is another man's terrorist.

I agree with Gary.

The difference is that the people who advocated and committed violence in the 1960s were considered and treated as mainstream liberals and praised by the left. The fact that Ayres is still lionized today confirms that fact that many people on the left still don't have a problem with those terrorist acts.

The examples of the right committing terroist acts cited here is nothing more than a few nutjobs out there doing things claiming they are for a conservative cause. They are not part of the conservative mainstream and conservative leaders don't praise those nutjobs.

The people on here who are saying terrorist acts committed by the left in the 1960s is the same as some nutjob conservatives today are comparing apples to oranges.

they are the same are comparing

I am so glad that this Board unanimously voted down emiritus status for Bill Ayers. I mean, come on.

Re the commentary, for an opposing view, check out what David Paul Hammer, his fellow death row inmate at Terre Haute has written, DEADLY SECRETS, TIMOTHY MCVEIGH AND THE OKLAHOMA CITY BOMBING. He also has a website, and his challenge to his readers is, that we not buy the government spin that the OKC bombing case is closed, but to follow the clues, and find out the truth.

They may all be bombers, but the difference is the "right-wing" bombers (even with identical academic credentials), would experience a cold day in hell before making it as far as Ayers got.