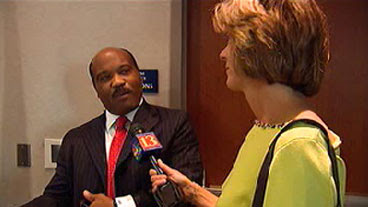 The high-flying CEO of the Indianapolis Airport Authority takes a crack at defending spending $50,000 on dozens of trips throughout the country and around the world during his 14 months on the job to WTHR's Mary Milz, who has been doggedly tracking John Clark for some time now. On that Super Bowl trip, the taxpayers picked up the tab for Clark, the authority's CFO, Marsh Stone, and three airline executives to attend the game in Miami in February. Unbelievably, Clark tells Milz the five discussed business during the big game. "I thought it was a great opportunity in a very informal environment to have what I'm going to say are some very critical discussions," he said. Clark declined to discuss with Milz the type of business he discussed with the airline executives.

Clark told Milz he stays at some of the most expensive hotels in the country during his travels because that's "where my peers are staying and where we're doing business."  He added, "Business transactions involve more than sitting at a table. Transactions can occur over dinner or at a golf course." Spoken like someone who has been on the public dole his entire adult life. When I used to work for the State of Illinois, there was something called a "government rate" state employees had to stay within. If you wanted to exceed the government rate, you had to get a sign off from a superior. In Clark's case, he tells Milz that his CFO approves his travel. Yes, that's the same CFO who accompanied him on that needless trip to the Super Bowl in Miami.

Milz also asked Clark about the speeding ticket he received while driving his Porsche 911 back to Jacksonsville, Florida after the Super Bowl where he used to run the airport before coming to Indianapolis.


Clark said he was going "85 to 90 miles" an hour when an unmarked patrol car began tailing him.


Clark said he sped up and the patrol car came up "right back behind me literally on my bumper and that's when I accelerated."

He said the state trooper followed him for 10 miles before flashing his lights and directing Clark to pull over.

"It was bad judgment, it was late at night. I had no idea who was behind me. All I knew was there was a car on my bumper," Clark said. "There are horror stories about what happens to people sometimes in Florida, so I was not about to agitate the situation."

Yeah, I've been tailed too closely when I'm driving down the interstate. My judgment tells me to slow down to the point where the person eventually grows irritated and goes around me. I never thought of stepping on the gas and speeding 135 mph to put distance between me and the car tailing too closely, but I don't drive a Porsche 911. I doubt my Honda Accord will go that fast.

This guy is a complete clown for an airport CEO. He told Milz he didn't apply for the airport CEO job at Atlanta's Hartfield-Jackson Airport where he is one of three finalists for the job. "I am not seeking that job. My focus is here in Indianapolis," he said. What a bald-faced liar. Yeah, you're a finalist for a job for which you didn't apply. Alex Azar II, the other clown Mayor Ballard appointed to serve on the airport authority board fully backs Clark and his lavish expenditures traveling on our dime. "Travel, both domestic and international, for business development purposes is an essential job requirement for John," Azar said. "Building positive relationships with airline executives and other top leaders in the aviation industry is one of John's most critical functions. To do that, travel is required." If that's what Azar truly believes, then both he and Clark need to be axed pronto.
Posted by Gary R. Welsh at 8:05 PM

Thumbs up to Mary Milz; two thumbs down to Micah Clark, Alex Azar, and Marsh Stone.

I think you mean John Clark.

Can we point to any accomplishments that are a direct result from all of this running around?

But has this clown landed some new business? Can he point to any significant deals that have been closed because of his work?

The burden is on him to show that any of this is necessary... not that it was approved. Showing some restraint when people are suffering economically demonstrates some situational awareness.

And I can anticipate the blowback already... he is being singled out because he's Black.

If I were Black I wouldn't want such an easy target for folks to point to in their efforts to discredit minority hiring practices.